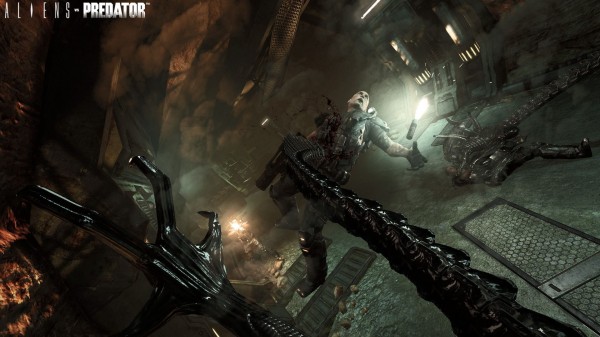 The multiplayer demo of Aliens vs Predator has been downloaded over 14,000 times over the weekend on Xbox Live. It is not all sunny news, since the PC version has recently patched a matchmaking bug, the Playstation 3 version is set to get a demo patch as well, according to Rebellion. They also say they are “really sorry”. Kind of hard to drop 60 bucks on a game when the demo is broken.

“Just looking at how the demo’s been rated on Xbox Live tells its own story – 14,000 downloads in a few days and an approval rating of 4.5/5, we’re absolutely delighted with the response….The one unforeseen issue was the matchmaking on PS3, that really came out of left field and we’ve still got Sony engineers helping us look into what is at fault. I understand why people question how it wasn’t spotted sooner but we just can’t replicate that kind of scale in normal testing.”

Very interesting. I expect Aliens vs Predator to do very well on the Xbox 360 and PC; should do alright on Playstation 3. Early reviews have been harsh and I hope bigger sites like IGN and 1up give out more informative and unbiased reviews. We shall post our review up when it launches.

How many people downloaded the AVP demo?