Red Eye is an unwilling agent for the notorious Redrum gang (Try reading that backwards! Mind blowing right?) from Sega’s 1996 fighting game Last Bronx. In a move befitting an evil organisation with such an evil name, their method for recruiting Red Eye (formerly known as Ken Kono) was to offer him something called the Redrum challenge (which I can only assume is a blind taste test of various cola brands). He refused them, and so they naturally set him on fire, causing him to go insane and rather than suffering horrible burns, his skin just turned an odd shade of bright red. He also got a pair of cool night vision goggles, giving him that little bit of extra weirdness/style to cement his image as the ‘crazy evil guy’ of the game.

He serves as the final boss in the game’s Arcade mode, or as a Sub-Boss before a character’s Rival in Saturn Mode.  The player fights a tonfa-wielding Red-Eye in Subway station in the Saturn Mode or in the player’s home stage in Arcade. If you play as Yoko (his sister) in either version you will get a nifty cut scene with a predictably touching reunion of the two characters. Who says fighting games don’t have great emotional investment and gripping heart-wrenching storylines?

No matter who you choose though, Red Eye can be a colossal pain in the proverbial to gain a win over, and unlike his Virtua Fighter equivalent, Dural, you NEED to beat Red-Eye if you want to get to the end of the game. He fights using a mix of traditional tonfa (a tonfa is kind of like a night-stick, only not wielded by police officers and with a less cool name) and martial arts based attacks, along with some bat-shit insane stuff where he just throws himself at you while spinning through the air and laughing like a lunatic. The fact that this game had rather high damage output in the first place means that he can beat you in a matter of seconds if he’s in a bad mood or you’re off your game. 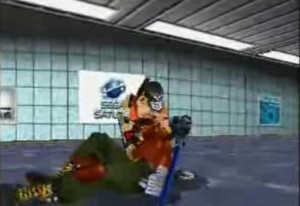 Not a dry eye in the house…

Sega had some wonderful secrets in their fighting games on the Saturn, some of them rather difficult to find. The best in Last Bronx were surely the secret comedy weapons that could be unlocked.

To unlock the weapons, the player has to finish the Saturn Mode with every single character, once that is done if they hold down left or right when selecting a character (Depending on what side of the screen they are on) they’ll start the match with comedy weapons.

Nun-chucks are replaced with corn-on –the-cob, tonfas with umbrellas and a kendo stick with a janitor’s broom. The best alternate weapon prize has to go to Zaimoku, a huge man who usually carries a sledge hammer, who gets a giant fish. That’s right, you can beat your opponent into unconsciousness with a huge fish. In my mind that alone is worth the price of the game. Even Red-Eye gets a bit silly here while beating his opponents around the head with a sushi set replacing his tonfas! 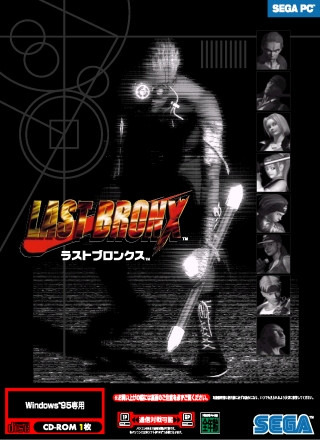 I uh, couldn’t find any pictures of the funny weapons. Here’s a cool black and white PC port cover instead.

When a guy beats you up with Japanese delicacy foods you know he’s the real deal as a last boss. The only other game I can think of where you can physically assault somebody with sushi is Dynamite Cop, also by SEGA. In fact I would go as far to say that SEGA is the foremost games company when it comes to raw fish-assisted homicide and assault. Yeah, screw you Nintendo.

Unfortunately Last Bronx never saw a sequel, and by extension Red-Eye has never made another appearance since, but like many one-time bosses, it only took one game to put him in the minds of SEGA fans everywhere, even if some prefer to call him ‘that annoying red bastard at the end of that fighting game that wasn’t Virtua Fighter’

Presenting “My Life with SEGA: Nothing Else Matters ”, a short film by A.J. Rosa
Last Bronx Red Eye Saturn The Last Boss