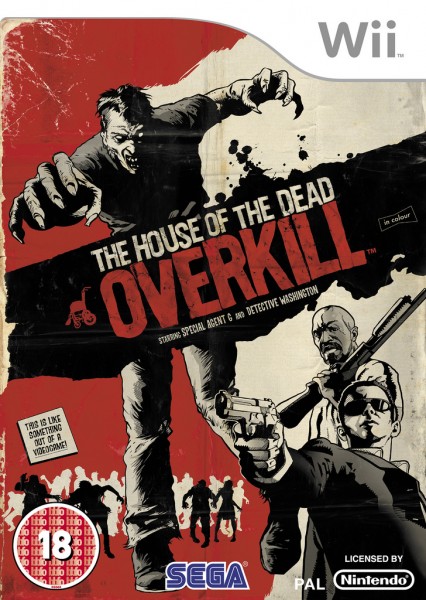 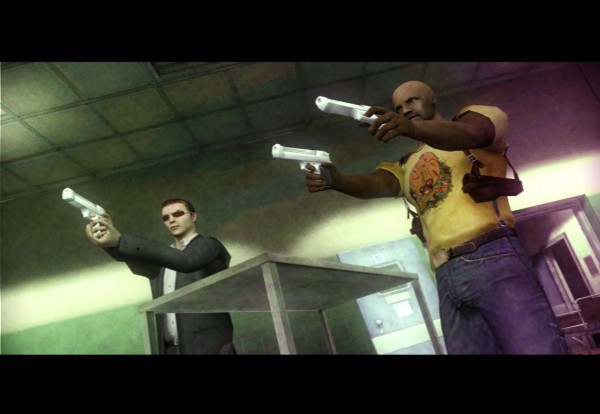 Now, I’ve long been a casual fan of the House of the Dead series. It’s never really been my favorite SEGA light gun series, but whenever I did get to play one of the games I always had a good time. The action was fast and frantic, the story was classic SEGA cheese and the boss battles where always a high octane blast. All of this is still here in Overkill, but it’s been given a makeover. Gone is the classic SEGA arcade cheesiness that permeated past entries in the franchise, replaced with something that is, honestly, a lot better. Headstrong Games, the people behind Overkill, have decided to instead go with a “grindhouse” style motif, basically parodying the old grindhouse style horror flicks from the 1970s, complete with a filter that makes the game look like it’s coming off of an old film reel, with black specks and lines.

Indeed, the grindhouse-like presentation is absolutely glorious. House of the Dead: Overkill easily has some of the best production values of any SEGA game I’ve played to date. Every chapter of the game starts out like a corny trailer from a classic Grindhouse flick, complete with an equally corny and over the top narrator. The voice acting and writing is also top notch, filling the game with many laugh out loud moments. I can’t remember the last time I was this impressed by a SEGA game’s voice acting and writing. While the story itself isn’t really something to write home about, the plot itself really did feel like something of an afterthought here. It was the characters and humor that really won me over. Though, the cursing can get excessive, and people who dislike potty mouths may as well skip over the cut scenes all together. 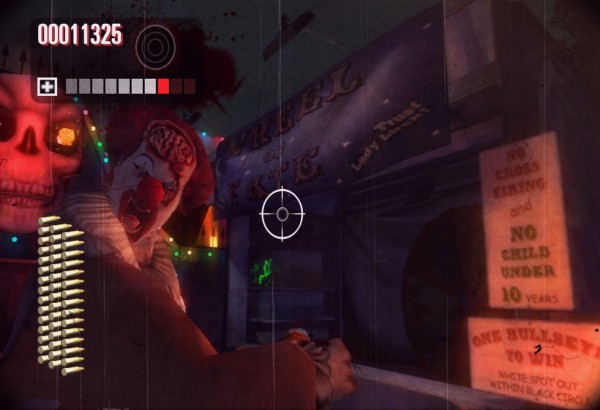 Of course, no game is a game without the game play, right? Well, I am happy to say that in this category as well, House of the Dead Overkill passes with flying colors, though with some niggling problems. The game is fast and exciting, like any good rail shooter. The shooting itself is as accurate as you could want it to be, and the environments are littered with special items that can slow down time, allowing you to line up better shots, regain health, gain a lot of points, or kill a lot of mutants at once.

Where this game really excels, however, is in its score attacking. The game encourages you to shoot with thought and accuracy, rather than just shooting constantly into the screen, through a simple but very well done multiplier system. For every zombie you are able to kill without missing a shot, adds up to your multiplier. There are several tiers of this multiplier, starting with “extreme violence”, and ending with my personal favorite, “Goregasm!”. Once a goregasm is achieved, every successive kill will net you a thousand points, until you finally miss a shot. This simple multiplier system adds a nice amount of depth to the game, and has been my number one reason to return to the game constantly in an attempt to improve my score. You can use the points you get to upgrade your current weapon, as well as add new guns to your arsenal. 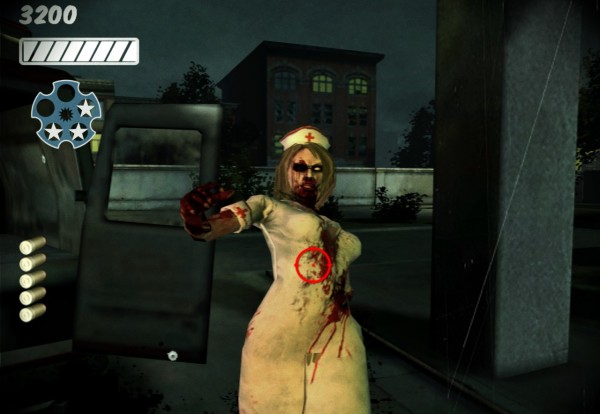 The enemies are mostly of the undead mutant variety. You won’t find too many knife throwing monkeys or kamikaze vultures. There is a decent amount of variety, including the usual skinny mutants, knife throwing mutants, fat mutants, and others. The bosses are somewhat hit and miss. Some of them, such as Screamer from Ballistic Trauma, and Brutus from Jailhouse Judgment, are an absolute blast. A few others, like Nigel and Sebastian from Carny, are ridiculously easy and not particularly fun. Indeed, the difficulty is probably the biggest problem this game has: It’s far too easy to beat. There is a mode unlocked later on that rectifies this problem, a much more difficult director’s cut, but you have to play through the game once to get to it.

All in all, despite how easy the game is, and how mediocre some of the bosses are, the overall package is incredibly fun, and easily as good as the arcade games this game draws its lineage from.

Graphically, Overkill is a real sight to look at. Typically, realistic games look a bit crap on the Wii compared to its HD counterparts, but the filter Overkill uses; which makes the game look like something out of an old grindhouse movie, adds a nice bit of stylized flare to the game that a lot of other realistic games lack on the Wii. The game is also often bristling with activity as well. It’s not too uncommon to have over a dozen detailed mutants on screen at once. Of course, all this action comes at a price: the frame rate can be sporadic at times, and it is noticeable. Sometimes the game will freeze for a second to load a new section, or when it’s struggling with the number of zombies on screen, causing you to very occasionally miss vital shots. That said, these instances are rare, and do very little to effect the enjoyment of the game, but it’s a shame it couldn’t be polished a little more.
This game is not one you’re going to want to mute. The music, of course, reflects the whole grindhouse vibe that the game’s visuals are going for. The music isn’t typically entertaining on its own, but as background music during game play it only adds to the atmosphere of the game. The voice acting, as I said before, is surprisingly good for a SEGA game, and much better than the usual stuff the arcade HotD games have. Detective Isaac Washington in particular, practically embodies Samuel L. Jackson, which is all kinds of awesome. 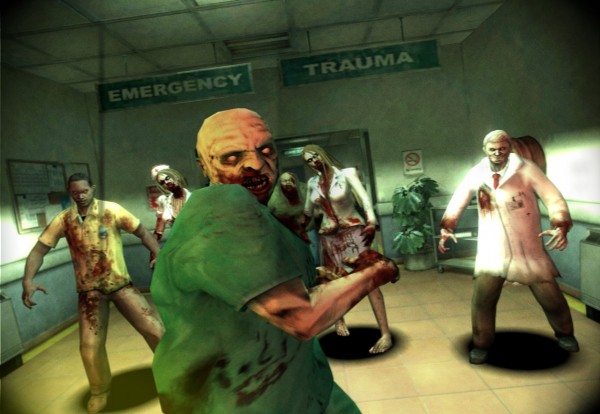 All in all, House of the Dead: Overkill is easily one of the best light gun games I’ve ever experienced. What does right, it does wonderfully, and what little it gets wrong doesn’t hurt just how fun the game is. If you’re a fan of quick, arcade style pick up and play action games, you have no reason to not own this game. Get yourself out of that computer seat, into a car, drive to a store, and GET IT. Or go get it from Amazon, that works too.

– Not everyone will appreciate the grindhouse homages and corniness
– The game, like most light gun games, is very short, beatable in around three hours.
– Normal game is too easy. You need to beat the game once to get to the more satisfyingly difficult Director’s Cut mode.
– Suffers from technical hitches, most notably a bad frame rate.
– Cursing can become excessive

4 responses to “Review: House of the Dead: Overkill”