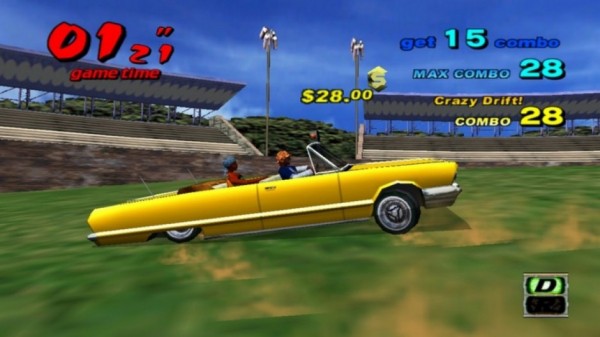 Via SEGA of America’s e-newsletter, Crazy Taxi has been confirmed for a November release to XBLA and PSN! Little more new information can be found in the newsletter, however this bit of copy can be found on the offical SEGA game page:

Hey hey, come on over have some fun with Crrrrrazy Taxi! Barrel through traffic packed streets, hurdle off parking garages, and crazy combo your way to crazy money in a wild frantic race to scare up the most fares. In Crazy Taxi, time is money, and only the craziest cabbies come out victorious.
Remastered for digital download with HD 720p graphics and Surround Sound soundtrack, leaderboards and trophy awards.
Two Game Modes – Arcade Mode and Original Mode for a variety of gameplay, and 16 Mini Games to hone your taxi driving skills.

Fans of speculation could cull a few bits from this piece of news. Sonic Adventure released in September, and Crazy Taxi is releasing in November. Could this mean we could expect a regular Dreamcast game release schedule of every other month? Also, the fact that Crazy Taxi isn’t hitting in October leaves the month wide open for another big (if not bigger) digital release: Sonic 4. Again, this is all speculative.

One final note, while SEGA hasn’t mentioned it, those “in the know” know that the game will not contain the original soundtrack. Thankfully, the game will support custom soundtracks on the 360 and perhaps on the PS3. Better download those MP3s! (legally, of course)

6 responses to “Make some crrrrrazy money this November!”