Sonic Colors is aimed at kids

Here is a story that originated as an ‘exclusive’ from the TSSZ News blog, a popular Sonic related website.They stated that Sonic Colors would be aimed at more mainstream Wii owners and younger gamers. In the end the game was marketed like every other Sonic game in existence.

The issue here is that all Sonic games are meant to be easy to pick up and play. There is no “complicated” gameplay. You move Sonic and you jump and run. The game didn’t all of a sudden change from Sonic the Hedgehog we all know and love to Sonic for the SEGA Pico.

That said, the game wasn’t ‘easy’ and one of the main issues reviewers  had with the game was its difficulty spikes. Something that most developers would avoid if you are aiming the game only at a younger demographic.

This leads me to the next misconception…

I really don’t know what started this, but sites like Kotaku and other mainstream blogs seem to always hint at this. One of the reasons is that it’s ‘in space’, which makes me question if writers on these sites have even played a game made before 2007. 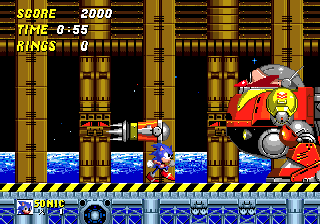 [Ah! Sonic 2 in space? Must have also copied Mario Galaxy!]

Actually Sonic games have a long history of ‘ending up in space’, From Sonic 2 all the way to newer games like Sonic 06. Seems like a stable of the series, just like Sonic being blue.

Other points being brought up is that Sonic Colors uses ‘power ups’ thus it has to be copying Mario because Mario invented power ups, right? This argument doesn’t hold much weight either, mostly because power ups have been used in games since the start of gaming. Pac-Man had his power up to eat up ghosts, after all.

No matter how you look at it, it’s hard to say that the Wisp power ups in Sonic Colors, are copied right out of Mario’s playbook. Especially since most of the Wisps powers are not even derived from Mario games. Not to mention Sonic Colors is not the first game to have ‘power ups’ of sorts, Sonic 3 had them and the whole series has always had item boxes.

The last point that I hear being brought up is that the game features red coins, which where used in previous Mario games. This is possibly the best argument, but I wouldn’t consider it a complete rip off. It isn’t the ‘core game’ of Sonic Colors. Plus other games this year have used this gimmick without being criticized as much as Sonic Colors. One game that comes to mind is Joe Danger.

Sonic the Hedgehog has been influenced by Mario since the first game launched back in 1991. There is no denying that without Mario there would most likely never have been a Sonic. But to say that ‘Sonic Colors’ is a complete rip off of Mario Galaxy or other Mario games is incorrect. Sonic Colors did not copy Mario Galaxy. It’s built itself off of past Sonic games, but it is still very much it’s own game.

Bayonetta is a sexist video game

I don’t think most people understand what the hell sexism is, they just make up a vague definitions like ‘it has a sexy woman on the cover’ and that equals sexism. So lets get the definition up first.

Is there a discrimination based on sex in Bayonetta? No. Bayonetta is the name of the lead character of the game. You know when you watch those Hollywood award shows, one of the lead females in the picture gets an award and shes very proud of the achievement, especially since women don’t really have lead roles in many Hollywood movies? That is basically Bayonetta, how many action games have a lead woman as a role? Discrimination? If anything it’s the opposite.

Now about stereotypical behavior. Bayonetta is a woman, that works alone most of the time, kicking the shit out of anything that stands in her way. How is this a sexist stereotype? In a world where the mainstream accept games like Cooking Mama, why can’t hardcore gamers just accept a badass female action hero in their games? If anything, Cooking Mama is actually a million times more sexist than Bayonetta

When he directed Devil May Cry, a game that featured a ‘sexy’ man flaunting his abs, no man complained about it, but when a woman sticks up her butt a bit it’s sexist. Don’t tell me that Dante from Devil May Cry and Bayonetta are nothing alike, they are quite alike in concept. They are supposed to be over the top, cool and sexy. The  only difference is that one is a woman and the other is a man.  Maybe the ones crying sexism are just sexist themselves?

This ‘comparison’ actually started when the first game was announced to be released in America. The first publication that I read referred to Yakuza as a GTA clone. Game Informer magazine called it the ‘Japanese Grand Theft Auto’, which is an incredibly misinformed if nothing else.

Do the games share similarities? Sure, Yakuza and Grand Theft Auto both revolve around lives of ‘criminals’ or gangsters. But does sharing this ‘similar’ plot point make one game a clone of the other? With this thinking, Godfather would be a clone of Clockwork Orange.

Grand Theft Auto also has a large focus on gun play. To defeat most of the missions you have to keep yourself well stocked with guns. In Yakuza, the game revolves around the fighting system. You can use guns, but they only have 2-3 bullets. Most of the game will have you fist fighting and dodging enemy attacks.

Grand Theft Auto is known for ‘creating’ the sandbox genre. Meaning you can drive around wherever you want and do missions when you want all over a city. Yakuza does feature something like this this, but its not really like Grand Theft Auto’s cities, where you can steal cars, commit petty crimes, and kill random people on a whim. In Yakuza you aren’t really allowed to kill random people and hookers, thus the overworld feels more like something out of an RPG game than a sandbox game.

Vanquish is basically Gears of War

when Gears of War came out it was praised for its cover system and co-op gameplay. First of all, Vanquish doesn’t offer co-op gameplay, the focus of Vanquish is ranking up points through-out the levels, not working with someone to get past hordes of bad guys.

Vanquish does have a cover system that is similar to Gears of War, but unlike Gears of War, Vanquish punishes the user for using cover. It will deduct points in the end of the stage depending on how long you stay in cover. Using it a lot is not something the game encourages.

Just because a game is a FPS or a third person shooter, doesn’t mean its copying whatever is popular at the time. Could they have been influenced on how they did the cover system? Yes. Did Vanquish outright plagiarize Gears of War? Well, unless Gears of War has an elaborate scoring system, giant bosses, and jet packs…no.

Why SEGA should stick with PlatinumGames

Opinion: So about Project Dream and their Dreamcast 2 plans – calm down, it’s not official or sane
Bayonetta Sonic Colors Vanquish Yakuza 3

23 responses to “Misconceptions about SEGA’s 2010 games”