I’ve recently played through the Japanese demo of Sega’s upcoming Yakuza of the End. A spinoff sequel to Sega’s popular Yakuza franchise where zombies help take a bite out of (organized) crime. (With all due respects to Mcgruff the crime dog.) Is there enough meat in this demo to sink your teeth into? (Okay, that was lame.)

In the demo, you play as Shun Akiyama. You are out with your chubby secretary when you hear gunfire from an upstairs window. Two figures come crashing down and one of them is a zombie complete with glowing red eyes and fangs. He attacks two officers who then turn their attentions to you. It’s here that we get into the new combat mechanics. Like the previous Yakuza games, you can still kick and grab objects to throw at your enemies, but punches are now replaced with gunplay.

But it’s here where some of the new controls falter. While most of the button placement is okay, the square button feels  unnatural for shooting. Fortunately, there is a second control option that should feel more natural for American/European players with R1 as the shooting button. (Note: To get to options, press start and go to the bottom choice with the hammer and wrench. Also, I’d recommend changing the second and third options for optional camera control.) Some new controls include strafing and aiming. However, aiming is only good for certain times as just hitting R1 without aiming automatically hits your targets. Aiming is great for gruesome headshots though.You can also use the D-Pad to select other weapons, but you’re stuck with a gun with infinite ammo for the demo.

It’s after the first Zombie battle that things get back to the old Yakuza style.  The demo allows you run around a small portion of the city to go bowling, play a slot machine, date a girl and take her to a hot tub and then play ping pong (accompanied with a “stare at her breasts” button). There’s also a hostess bar section, though the Japanese text makes it impossible to play for most Americans. I’m hoping the open ended style stays through the whole game and not just before the zombie apocalypse comes. 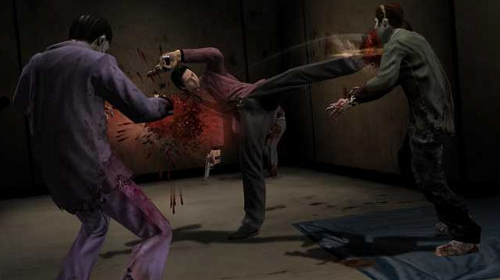 It’s when you head back to the office that things get crazy. After a cutscene, the zombie apocalypse occurs and you have to try to survive.  You gain some new mechanics along the way including the ability to zoom onto an exploding target to take out several zombies at once. You meet up with other survivors including one guy who has a DVD store full of weapons. It’s here where I got stuck and couldn’t proceed further. I talked to the two guys and went through every option but since I can’t read Japanese, my time with the demo ended there. As long as it was, I wonder if it went even longer?

But what a fun and long time it was! The American Yakuza 4 demo is pathetic compared to the amount of content you get here. My time with the demo went on for a full hour. From bowling to ping-pong to blowing zombies’ heads off. This may be the longest demo I’ve ever played! There is some intensity at times as some rooms may have dozens of zombies in them you have to fight off all at once.

I do have a few minor complaints. First off, no Club Sega in the demo! Waahh! Oh well. The default controls are kinda awkward.  The button layout is okay, but camera control feels awful. This is important as the camera can really screw you up in tight spaces. These are minor nitpicks, as you can change them in the options menu. My other problem is that there wasn’t enough variety in the way you killed zombies. You can either shoot them, attack them with a weapon on the ground or just kick them. It felt like it needed something more. (Note:  Zombie bosses will be in the full game and that will help a lot.) 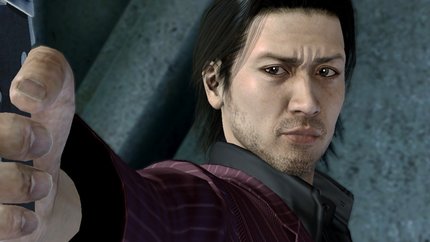 All in all though, it was still a lot of fun and I hope it comes to the States next year. Until then, I recommend checking out Yakuza 4 when it hits stores on March 15. Any sales it receives helps bring Yakuza of The End that much closer to western shores!

8 responses to “Hands On Impressions: Yakuza Of The End”