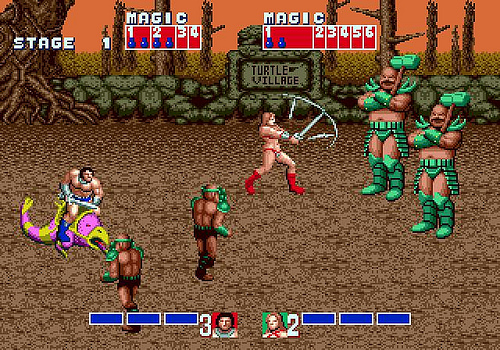 With the re-release of Guardian Heroes on the way, and the popularity of recent games like Castle Crashers and Scott Pilgrim, I thought it would be fun to look at one of the classic SEGA franchises: Golden Axe, and the possibility of another entry into this series.

Created by Makoto Uchida, the arcade title Golden Axe introduced players to three characters on a quest to save the land of Yuria from the clutches of the evil Death Adder. You could choose from Tarik the Ax Battler, Gilius Thunderhead and Tyris Flare, all who had their various strengths and weaknesses. Plus, if you didn’t want to challenge the hordes of the Death Adder alone, a friend could tag along and help you out. Golden Axe had unique gameplay features like a varied hit detection system, the frantic gnome bonus stages, and visually stunning magic spells, but one of the features that helped the game really stand out was the ability to hop on beasts to really bring the pain to the game’s enemies. Golden Axe was a fun and unique beat-em-up, and it was subsequently ported to several platforms, the most popular version being the SEGA Genesis port.

About two years after the original game came out, Golden Axe II arrived on the Genesis, bringing back everything that made the first game fun. SEGA had the three adventurers once again saving the land of Yuria, this time from a foe known as Dark Guld. While there weren’t any major differences in terms of gameplay and visuals, SEGA did tweak the magic system so that now the player had more control over how powerful they wanted the magic spell to be. 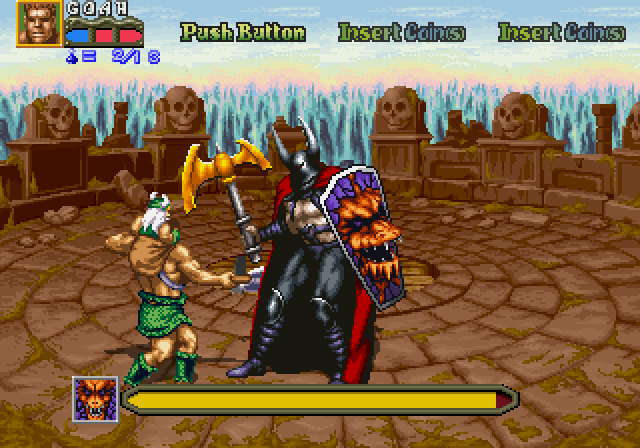 Golden Axe II was a fun addition to the series and it wasn’t too long before Golden Axe III was created. This time however, the cartridge was a Japan exclusive, so most of Golden Axe’s Western audience wouldn’t be able to play it for another few years. Golden Axe III is definitely the most different of the Genesis titles, featuring all new characters in addition to an added block system and new visuals. While Golden Axe III was fun, one of the franchises’ most treasured entries was in the arcades. Delivering excellent graphics, fun new characters and some of the coolest beasts to ever appear in the series, Golden Axe: Revenge of the Death Adder became a SEGA arcade classic. Makoto Uchida again acted as the lead composer for the franchise he helped create, and I can honestly say that Revenge of Death Adder is one of the most entertaining beat-em-ups I’ve ever had the pleasure of playing. After these titles, the Golden Axe series lied pretty much dormant, with the exception of a spin-off fighting game titled Golden Axe: The Duel. The series wouldn’t return again until 2008 with Golden Axe: Beast Rider, a re-imagining of the series developed by the now defunct Secret Level. It was the first Golden Axe to feature true 3D gameplay. While I personally really enjoyed this installment, most people were not happy with it. 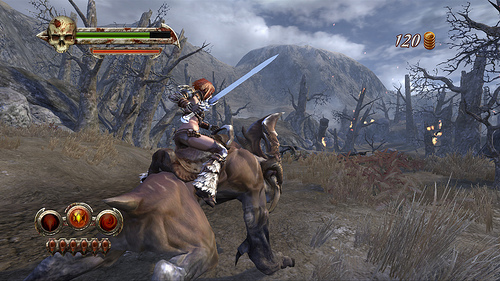 Even if you see Beast Rider as a misstep for the franchise, there’s no question that Golden Axe holds a special place in quite a few gamers’ hearts. With the proper execution, I have no doubt that SEGA could bring back the Golden Axe franchise in a big way. If SEGA could develop a Golden Axe title similar to the Arcade and Genesis games, I’m positive it would do pretty well. Downloadable titles like Castle Crashers have shown that the beat-em-up genre is still relatively popular, so I think another installment for Golden Axe would best suit the online market, whether it be an HD remake or an entirely new sequel. SEGA should probably reanalyze the original games and see what made them unique, and then try to expand on those concepts. It would be neat to see more variation in the beasts, magic and such: little flourishes that would make the game feel fresh but also keep it familiar to the player. Bringing drop-in/drop-out cooperative play would be a good thing too. Also, I’d want to see them bring back the original three characters, as those are by far the most recognizable characters the series has. Many people like the Golden Axe games for the the co-op aspect, so bringing this back would be essential. Having Golden Axe as a side-scrolling HD title seems like an excellent way to do a sequel.

Alternatively, I wouldn’t mind seeing SEGA attempt another 3D Golden Axe game. Beast Rider’s mechanics were mixed depending on who you ask, but I think overall there were some good concepts that were in that title. The timing-based sword attacks were a unique mechanic and a majority of the beasts were fun to use, although maybe they chould be a little less clunky next time. I’m quite certain that if SEGA took the time and effort to make a quality Golden Axe game in 3D, it could truly be something remarkable. Whether it be a side-scrolling experience like the classics or a new 3D adventure, if the Golden Axe series were to receive another sequel, I’m sure it would bring much excitement to many a SEGA fan.