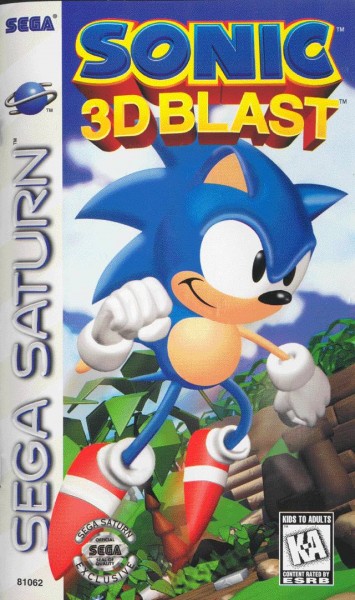 In Sonic 3-D Blast, Sonic goes to Flicky Island to visit his bird buddies. But once again, those Tweety Bird wannabes have been turned into Badniks by Dr. Robotnik. He wants to use their special dimensional warp rings to help him find the Chaos Emeralds. It’s up to Sonic to free the Flickies and stop Dr. Robotnik before it’s too late.  The graphics are made of CG Rendered sprites similar to Donkey Kong Country and other games of that era.  In the game, Sonic roams around seven different lands jumping on Badniks to free the Flickies while dodging lasers, traps and spikes. 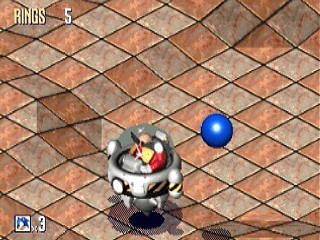 Probably the best thing about 3-D Blast that stands out from its Genesis version is the music. Richard Jaques compositions are wonderful and the work he did is easily in my top 5 Sonic soundtracks of all time. Of course, Jaques gets a big advantage here, as Jun was stuck composing with the Genesis sound chip, but after Sonic 4 I kinda question Jun’s musical talents. The graphics are much more colorful and clean compared to the Genesis version and on certain levels, have some cool effects like fog have been added. If you look at side-by-side screenshots of the Saturn and Genesis versions of 3-D Blast, you can really tell the difference. Level are much more heavily textured and have greater detail on the Saturn version while the Genesis version looks flat and bland. Take a look. 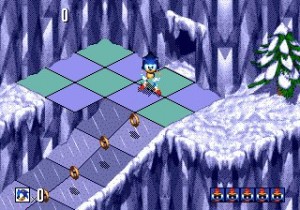 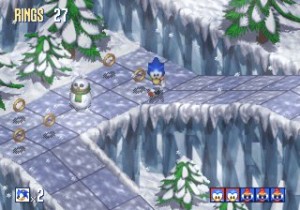 There are some cool power-ups scatted throughout the game. Mostly in the from of shields similar to ones you got in Sonic 3. A standard shield that lets you take one hit, a fire shield that of course, protects you from fire, and a gold shield that gives you a homing attack. Yes, even in the first “technically 3-D” Sonic game, he’s got a homing attack. Also, there’s a nice feeling of exploration to it. The levels are laid out as a sort of large, isometric maze. You’re constantly wandering around for Flicky’s to free, shields to find and rings to collect. It’s the latter part that’s important. Hidden in the levels, you will find Tails and Knuckles just standing around looking bored. (Tails even yawns.) Give them 50 rings, and they will send you to what is absolutely the best part of the game, the Saturn exclusive Bonus Stage!!

For me, these stages alone are worth the price of admission. The music is one of the most funky tunes I’ve heard in a Sonic game and the levels play like a slightly improved version of the Sonic 2 Bonus Stage. No Tails to steal your rings, it’s a bit easier (AKA less frustrating), and the ability to roll or jump higher adds a new twist. It’s because of these bonus stages that I’m more cautious during the game. It sucks to have over 50 rings just to get hit by a Badnik or get knocked into a trap. This also helps bring me to my complaints about the game.

The main problem I have is with the controls. They’re not horrible, but just imprecise enough to be annoying. The game takes place on an isometric field, giving a “psuedo 3-D” look to it. This allows Sonic to go in any direction, but it also kills any sense of speed. You’re constantly being careful of how fast you go so you don’t run into anything. I’m taking it slow in a Sonic game! With the clunky controls on the D-Pad, it’s too easy to run too fast and go right into an enemy or go bouncing off the walls into a trap. If you have a 3-D pad on your Saturn, that might help some. Occasionally, you’ll get an imprecise attack that will knock out all of your rings and send your Flickys running from you. You’d think that your fine, feathered friends would come running back to their savior. But no, they go scattering and you gotta go pick their sorry butts back up even when they’re flying around a pool of lava. Also, the animation on Sonic is way off when he runs. Almost as if he’s sliding (which makes sense on the ice level) or he’s pinching a loaf the whole time (Sorry to give you that mental image). Besides that, Sonic has lost his sense of speed. Only in the bonus stages does Sonic run fast. For the rest of the game he’s barely doing a jog. Furthermore, the game just doesn’t feel like a “Sonic” game. With Sonic’s speed gone, you could swap Sonic with anyone from the Mario cast, or even Crash Bandicoot, and it would feel no different. Lastly, they left out the important save feature. Something that was prominent even in the Sega CD era! If you want to go back to where you left off, you have to use a cheat code. There’s no excuse for any game during that time not to have a save state. 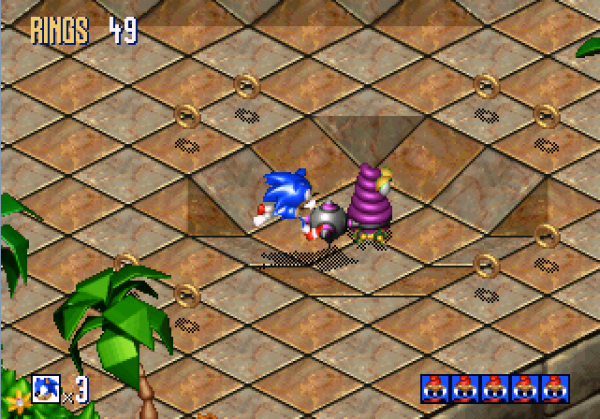 I enjoyed this game much more than I remembered. It’s definitely not the best Sonic game by any stretch, but I think it gets a bit of a bad rap due to it  being a poor replacement for Sonic Extreme and  having a much weaker Genesis version out at the same time. However, I played it for 4 hours during my first play though and found myself enjoying it quite a bit. If the Genesis version is the only one you’ve played, you haven’t played the REAL Sonic 3-D Blast.