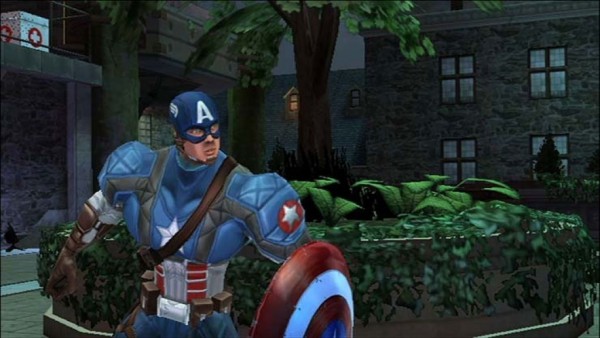 From the same team that did Tournament of Legends (poorly reviewed but I thought it was alright) comes Captain America: Super Soldier for Wii. Similar to the HD versions, Cap goes around a Hydra occupied mansion taking down soldiers in a variety of ways and solving puzzles and avoiding traps to get into new locations. It’s in the variety of its puzzles and battles that keeps the game fresh. Hydra soldiers can be attacked in a many different ways. You can sneak up on them and knock them out, grab one from behind and make him gun down his ally, fight them straight on or get a group knocked down and ready for attack by using your shield.

Speaking of, your shield is both a great means of defense and offense. Holding down C and using the Wiimote, you can aim at multiple enemies at once and knock them all down. This makes it easier to attack a large group rather than head on. This method is also used to knock out bombs and solve puzzles that will open doors. Fortunately, you only use your Wiimote for aiming your shield and not any dumb throwing gestures. Holding Z lets you hold your shield up and defends you from incoming fire and other projectiles. This, too, can be used to solve puzzles. In one room, there were gun turrets that popped up when I stepped on a trigger. I figured out how to use this to my advantage as there were several switches that needed to be shot in order to open a nearby door. I held up my shield and was able to delfect the bullets and have them ricochet to the switch. The last turret forced me to ricochet bullets off my shield, then a wall, THEN hit the switch. I actually felt clever figuring it out quickly. 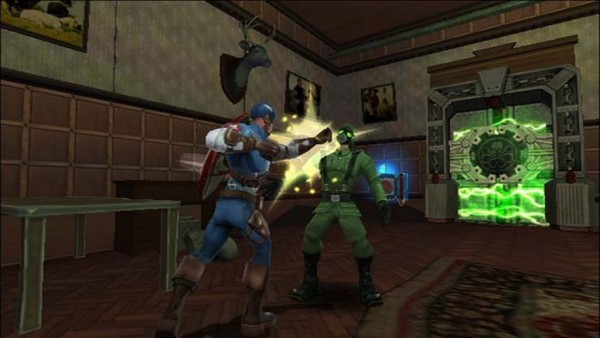 The only thing slightly disappointing was the platforming, which is basically too easy. It’s one of those games where you can climb and your hands a feet are almost magnetized to go to the next spot (see infamous and Enslaved). There were some interesting spots where you had to throw your shield at an object to make it drop and become a platform, but other than that, it was really easy. Hopefully the platforming will get trickier in later levels.

Between fighting, puzzles and platforming, Captain America on Wii has plenty to keep you entertained. Graphics are cartoony, but very expressive in cinematics. It’s the best Marvel/Sega game I’ve played on Wii and is worth checking out for third-person action fans.