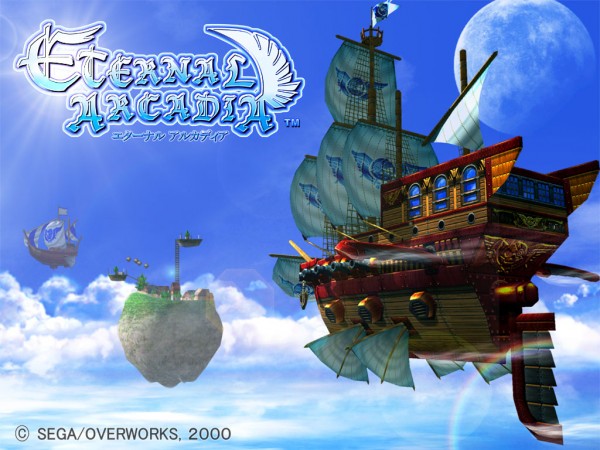 For Episode 23, I thought I’d go back to in-house SEGA: a fan favorite, and one of the many greats to come from the Dreamcast era. Of course, you can see from the picture that I’ve picked Skies of Arcadia. As an RPG it was, in many ways, as traditional as they get. It had turn-based combat, it had a lack of voice overs, it had chirpy characters, and it had a bright and colorful world much more reminiscent of Japanese RPGs out of the old days than the much darker turn they took with the likes of Final Fantasy VI and VII. That said, Skies of Arcadia also took place in a world in the sky, a truly incredible setting which remains one of the most impressive worlds created for a Japanese RPG that I’ve ever experienced.

Maybe it’s because nothing defines “the unknown” quite like the sky, a world in which humanity can’t survive outside of planes or space ships. Maybe it’s because this sky, with its collection of floating islands, mystical temples, bustling cities, strange lore, and great rifts, served as the perfect setting for a good old fashioned pirate story. The world established with Skies of Arcadia was not only huge and packed to the brim with things to do and places to explore, but it was the perfect world to grab hold of our imaginations and take them for a spin, something that only the best RPGs can manage to do.

I wanted to live in this world. I wanted to set sail on a floating ship with this crew as they explored the skies and stole from the evil empire’s ships… Or even simply searched the skies for moonfish. Skies of Arcadia was a pretty fantastic RPG in that sense. Truth be told, I’ve always given this game a bit of a hard time; as amazing as the world was to me, I thought the gameplay, most notably the combat system, not to mention the storyline itself, could have used a lot of work. A sequel would be great just for that purpose: to get to explore another amazing world, but maybe one without so many random battles or such a slow combat system. There were tons of things Skies of Arcadia did so well, and it was such a memorable and fun experience that I’d love the chance to relive it in the form of a sequel.

Here’s what I would not want to see happen: I would not want to see the developers abandon a traditional turn-based combat system, and I definitely wouldn’t want the game to lose its “old-school RPG” vibe. These are two of the things that helped make it so special. The changes I’d make to the combat system (and this is especially true in the ship battles) would be to cut down on the waiting time. Skies of Arcadia often pitted you against multiple enemies at once, with sometimes your entire ship deck filling with foes once you entered a random battle. The game required you to select everyone’s moves at once, then sit and watch them all play out. Then, you would have to watch the enemies’ moves all play out. It was slow, and not only did battles take longer than they should have, the amount of time spent waiting (or watching special moves once you broke those out) really killed the pace. A turn-based battle system that moved much faster would be welcome, and the ship battles would have the potential to be something so much more fun and exciting than they were in the original game. It’d be great to see something cooler done with them.

In regard to the story presentation, Skies of Arcadia was actually incredibly cinematic. A real accomplishment, considering the lack of voice acting. If you compare the cutscenes of Skies of Arcadia to other games of the time (Grandia II, for example) it doesn’t even compare. Skies was truly awesome in this area. A sequel adding (good) voice acting would make these cutscenes, chases, and other exciting moments even more thrilling. The sound quality of the music would be updated, but the music in the original was so good that I wouldn’t want to see the style changed too much. The corny facial expressions, though, could really be improved (see pic below). 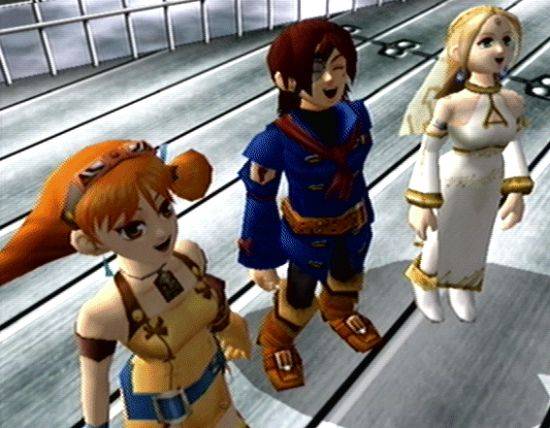 Random battles are a thing of the past. The ability to see (and avoid) enemies when sailing the world would make exploration much more fun and less stressful. I know it was easier to avoid enemies later in the game, but I think the entire game would have been improved if this was possible earlier. Skies of Arcadia already featured a massive world, and thinking about what’s possible on next-gen hardware is almost mind-boggling. Even with such a big world and so much to explore, Skies told (for the most part) a well-paced story that was at times truly gripping, and I’d want a sequel to be the same way, albeit maybe with a slightly more original tale being told. 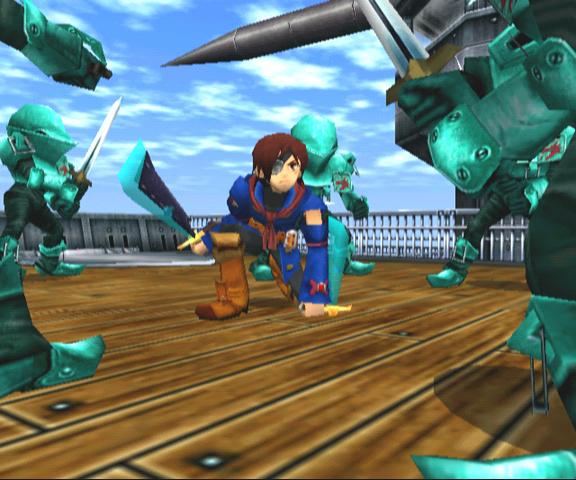 Does anybody want a new Skies of Arcadia game? That’s what I’m not totally sure about. The game was critically acclaimed and is regarded by some SEGA fans as a classic. Outside of that circle, I wonder if most people are even aware of the game’s existence, let alone played it. SEGA was never exactly willing to throw money into promoting it, and even though it got a Director’s Cut re-release of sorts on the GameCube, Skies of Arcadia remains one of those hidden gems; a game that’s talked about all the time in certain groups but that, overall, too few people have played. It may not have been a flawless RPG, but in a lot of ways, it’s one of the more memorable ones that I’ve played. I definitely encourage people to seek it out, whether on the Dreamcast or the GameCube, and I beg SEGA to consider doing a sequel on a high-definition console. I think with the right marketing, Skies of Arcadia could have become a pretty great RPG franchise… Or at least a trilogy. I’d love to see it given that chance. 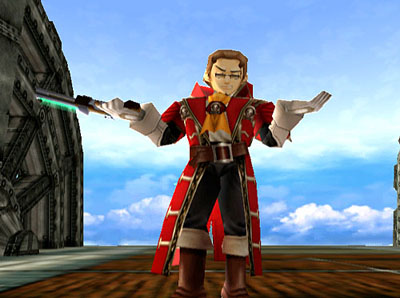 You can read my original review for the game here, and while you’re at it, drop a comment or two in the section below. Thanks for reading, SEGA fans.