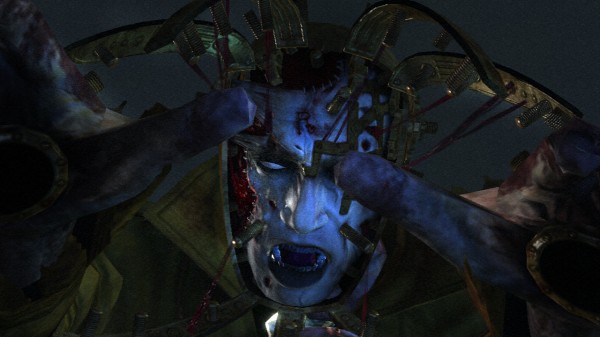 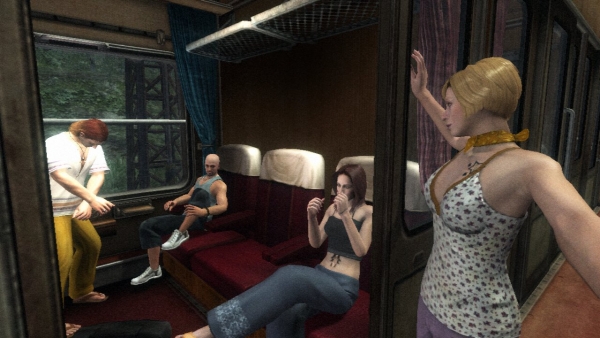 Rise of Nightmares story is a simple one: Married couple Josh and Kate are on vacation in Romania. Their story kicks off on an uncomfortable train ride, as Josh wakes up he drops a flask of booze and his wife catches him, berates him and storms off. Before Josh can find her and apologize, the train is attacked by a giant copper plated metal headed monster in a trench coat named Ernst. Ernst captures the passengers and takes them to his master’s dungeon. Josh escapes his cell and, with the help of other survivors, battles his way through the undead to rescue his wife.

While simple and cliché, the story is easy to get into and understand. Better to have the players focusing on the controls and gameplay rather than some overly complicated tale. Backstory is provided by mini audio cassettes left behind by a detective who previously went on the same adventure Josh is embarking on, while the main story teases the player with the location of his wife and the whereabouts of the monster Ernst. My favorite moments are those lifted from slasher films. When I met the rude German tourists on their way to a rave, I KNEW I’d be seeing them get theirs soon enough. 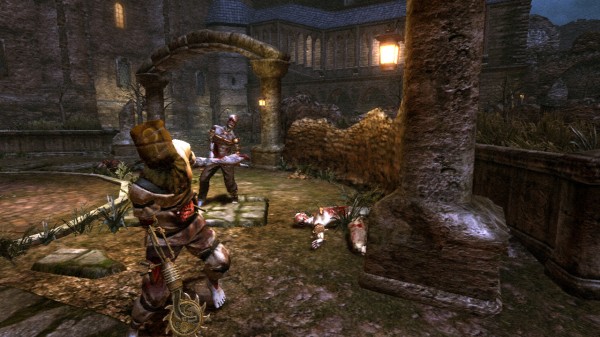 Rise of Nightmares graphics are effective, but are by no means amazing. While environments are detailed, the living characters look a bit dead while the dead characters actually have a lot more life to them. Thankfully, after the first chapter, human characters are sparse and the enemies and environments are plentiful and work well in giving the game a creepy atmosphere. Each chapter takes place in a different location (dungeon, train, swamp, graveyard, mansion) and each location is well rendered and varied.

I found the music to be excellent. No, you’re not going to come out of the game humming the “Rise of Nightmares” theme and there are no groovy “House of the Dead: Overkill” tracks, but what you do experience is a score that features haunting ambience, agressive accents and classic horror staples. All of this does a great job in punching up the spooky moments of the game. Case in point: During my trek through the mansion, I narrowly avoided the game’s main monster and found myself in a near empty room. Despite there being nothing really scary in sight, the soundtrack went into this agressive pounding that made me feel on edge. As though I don’t see anything, I should be expecting something. Moments later, just as I was about to open a door, a horde of zombies broke into the room via the windows.

When separated, the graphics are good but not great and the music is well done but lacks any real hook. However, when combined the visuals and sounds work well in creating a scary environment. 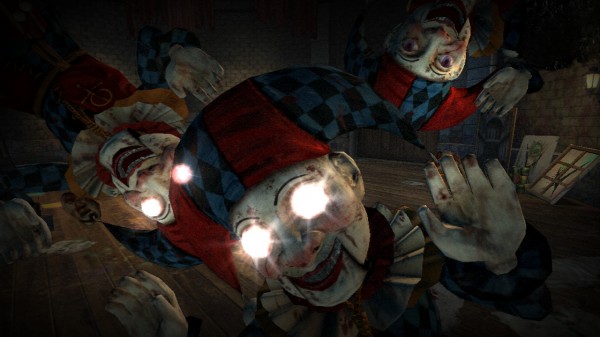 Gameplay can be best described as Condemned: Criminal Origins melee combat combined with House of the Dead style enemy and boss encounters. Rise of Nightmares has the distinction of being the first free roaming first person Kinect title, and unlike The House of the Dead games, players move as slowly or as fast as their want, exploring wherever the game allows. The game mostly takes place along a linear path, with opportunities to stray from the main road and venture into various rooms and hallways. Sometimes you might find a collectable, like the aforementioned detective tapes or tarot cards, or you’ll find a powerful weapon. Other times you might encounter more enemies.

Weapons range from your fists and feet (the weakest) to the usual blunt objects like hammers and vases to sharp objects like icesaws and surgical knifes to super-powered weapons including chainsaws and electrically charged objects. Players are confined to carrying one weapon at a time, and weapons degrade as they are used over time. As such, it’s important to not overuse a powerful weapon if you intend to use it for a longer period of time, and to always keep your eyes open for other weapons in case your current weapon breaks. Thankfully, weapons can always be found and I never found myself empty handed. Even if caught without a weapon, punches and kicks are effective enough to get the player to the next room where a weapon will certainly be waiting.

Mutants and monsters aren’t the only hazards, as players will also encounter saw blades, spikes and electrified water which are to be avoided, and Indiana Jones-like darts which players must literally duck to avoid. The game does feature the expected “solve the puzzle to progress” moments, but they are usually rather simple. Dig the key out of the corpse’s chest, find the electrical off switch to open the door, turn the crank at just the right speed, etc. While you will encounter the same type of puzzle more than once, they never take too much precious time that could be used on combat. 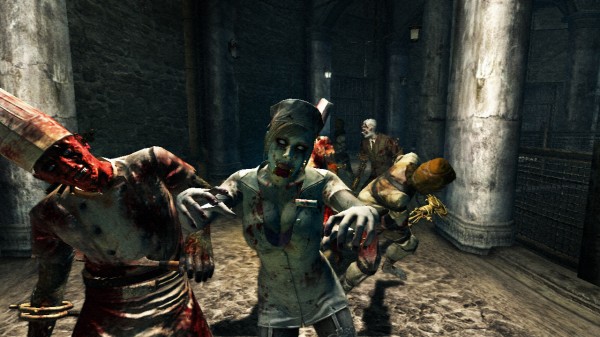 And so we end with the lynchpin of Rise of Nightmares: the controls. For the longest time, I had no clue how a free roaming Kinect game would be possible, and apparently developers had no clue either as every Kinect title thus far has either been on rails or had the players confined to a single space. The way Rise of Nightmares goes about free roaming movement is very simple: stepping forward moves forward, stepping backwards moves back and twisting your shoulders changes direction. Does it work? For the most part, yes! After a brief period of acclimating to the controls, I was able to move about the game with ease. The only real moments when things went wrong were when I got too wrapped up in the combat and went into a punching pose, sticking my legs apart front to back, and when I ventured into a tight space. It seems the developers were aware of these moments, as the game includes a handy auto walking assist that can be activated by raising one’s right arm. The game will take over movement and steer the player back on the main path. This feature is handy if you want a quick hint as to where to progress next or if you need to turn around in a tight space, and don’t want to step backward or pivot your shoulders.

Basic combat includes the punching of one’s fists and the kicking of either foot. Punching doles out minor damage, kicking comes in handy when you want to push a mutant back or if you want to aggressively enter a room by kicking open the door. When I discovered this could be done to just about any door, it became my only method of entering a room. When carrying a weapon, or simply using your fists, putting up your dukes activates the weapon. Sharp objects like knives can be stabbed or slashed, with the ability to slash up, down or at either angle. This comes in handy when encountering enemies with metallic body parts. While a knife doesn’t do a thing to a metal arm, if the player directs their attacks at the fleshy bits of the body they are able to do damage. Thus, combat requires more than mindless slashing and punching as you need to focus your attacks on the weak points and avoid the tougher bits. Of course, there are certain powerful weapons that destroy just about anything. The chainsaw, for example, is activated by putting both hands out as though you’re driving a chainsaw into a mutant’s chest. Other unique items include pincers which operate like giant hedge shears and enemy body parts which become small swords and clubs.

Items can be picked up by putting one’s hand out in front and directing it at the object. Even if on the opposite side of the room, the game will auto walk the player over to the item which they intend to take. This saves the player from having to line their body up with every object or have to be right next to anything that needs interacting with. Other actions include pushing, pulling, climbing up and down, swatting and slapping (damn leeches), ducking, sidestepping and stepping into. The game even requites inaction, such as when the monster Ernst is near, the player is directed to stand still and not make a sound. 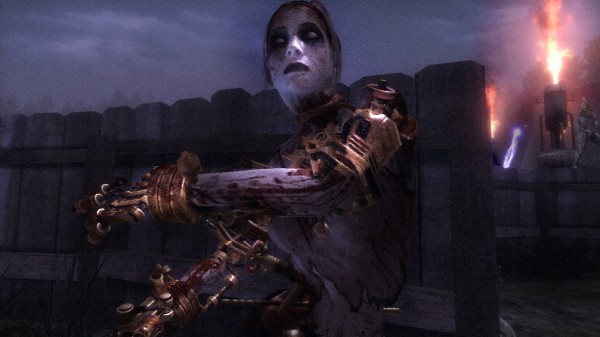 Overall I very much enjoyed Rise of Nightmares. Yes, the free movement wasn’t perfect, but neither are the controls in games like Resident Evil or Shenmue, and yet those games continue to be fun. Considering this is the first game of its kind, I’d say it was successful in what it set out to do. Combat is fun and varied, the atmosphere is the right mix of campy horror and creepiness. Does the game have replayability? Well there are different difficulty levels, a time attack mode (unlocked once the game is completed) and a number of different ways to take out the undead. The game could have used a multiplayer mode, or an arena battle mode, but if the lack of those meant more time spent on the single player experience then I’m okay with their omission. If you are a Kinect owner and enjoy unique SEGA titles, pick up Rise of Nightmares. If you don’t have a Kinect, add Rise of Nightmares to the list of games to pick up once you do.

6 responses to “Review: Rise of Nightmares”