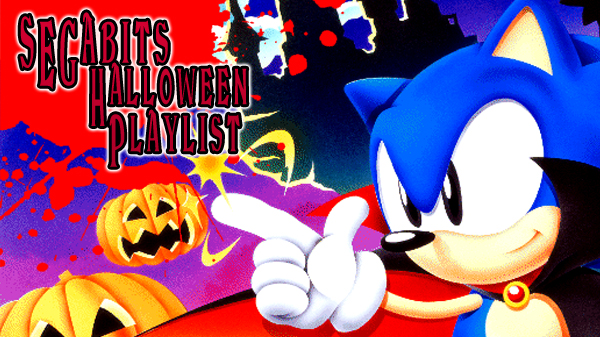 Believe it or not, the day before Sonic Generations releases there’s a little holiday going on called Halloween. Everybody has their own Halloween traditions, mine focus on pumpkin carving and scary movies. This year I thought I’d mix things up by throwing video games into the mix, specifically five games with a Halloween slant, each played on a different SEGA console. What follows are the five games I’ll be playing over the Halloweekend, and I hope if you have any of them you’ll revisit them as well.

Probably the most saccharin of the games on this playlist would be Castle of Illusion for the Game Gear. Developed by SEGA AM7, Castle of Illusion for the Master System and Game Gear is a fairly different game when compared to the famous Genesis/Mega Drive version. Stages and mechanics are different, leading to a unique new adventure that begins with the evil witch Mizrabel kidnapping Minnie Mouse because the witch is jealous of Minnie’s beauty. Interesting that the witch seemed to find beauty in a black and white cartoon mouse with a bow. In regard to Halloween aspects of the game, you’ve got a witch, an evil castle and a final stage within the castle where you make your way to Mizrabel. Leading up to the finale, Mickey runs through some bizarre locations including a forest, a miniature world and the inside of a clock tower.

Known as the only good game of the franchise in the 80’s and 90’s, Ghostbusters for the Genesis is truly fantastic. Developed by Compile, the folks behind the Puyo Puyo games, Ghostbusters touts great graphics, sounds and gameplay. Right off the bat, players are presented with a 16-bit adaptation of the well known Ghostbusters theme, followed by the option to play as one of three Ghostbusters. It’s a shame Winston got the shaft, but considering most other Ghostbuster games of the era just gave you a generic man in ghost busting gear, seeing the big three represented was huge. Being a Bill Murray fan, I always go with Venkman. Gameplay is basic platforming and shooting, but an item shop allows for a number of cool weapons and items. The game is in no way an easy one, but it is great for those who like a challenging platformer. If difficulty isn’t your bag, lock on a Game Genie and use one of the many codes to make life easier. I prefer unlimited lives and money. Once you get to the dark fire stage you’ll need all the money you can get, thanks to the night vision goggles that degrade as you use them.

Suggested to me by SEGAbits forum members, Dracula Unleashed is one of those rare SEGA CD FMV games that leans towards being good. The story takes place ten years after the events of Dracula (the book or movie, take your pick) as you play Alexander Morris, a man investigating the possible return of Dracula. While the acting is rather cheesy, if you enjoy a good B-movie, the FMV scenes will be right up your alley. Thanks to being split across two discs, graphics are great for a SEGA CD title and load times are short. It’s a difficult point and click game to master, but the presentation and challenge make it worth checking out.

Even before owning the SEGA Saturn title Mr. Bones, I knew I’d love it just based on the name. When I finally did get my hands on the game, my boney love was affirmed. The game is essentially a string of mini-games connected by a crazy story about an evil philosopher named DaGoulian who creates a skeleton army so he may rule the world. Thankfully, one skeleton risen by DaGoulian was pure of heart and rebels against the mad man, and this good skeleton is named Mr. Bones. A blues man in his former life, Mr. Bones still keeps his cool in death. At one point in the game he comes across an electric guitar, leading to one of my favorite mini-games: skeleton guitar solo! Try to spot the occasional boney arm holding up a lighter.

The Typing of the Dead

I could have gone with any of the popular SEGA lightgun games, but I decided to go the wacky route with the franchise’s typing spin-off. Educational and hysterical, Typing of the Dead leads players through The House of the Dead 2 with keyboards replacing guns, and words replacing the pull of the trigger. If you can get your hands on two Dreamcast keyboards, do so. A two player typing game is a blast and can make any Halloween party oddly memorable.

Those are my Halloween game picks, what are yours? Shriek off in the comments section!