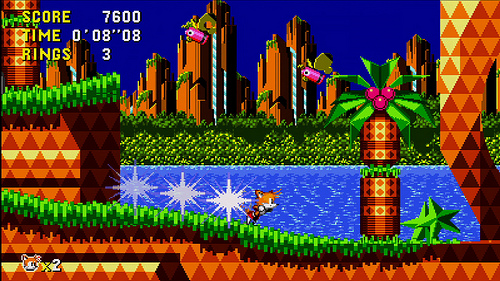 In a very surprising bit of Sonic CD news, Sega has confirmed that early purchasers of certain tablets at GameStop in the U.S. will recieve Sonic CD pre-installed and available this week! That’s a huge leap considering it won’t be available for download until December. In another big piece of Sonic CD news, Tails will also be playable after finishing the game!

Right now, gamers who purchase a tablet, including the Samsung Galaxy, Acer 100 and ASUS Transformer, being sold at 200 GameStop locations and online at www.gamestop.com, will receive a copy of Sonic CD, pre-installed and ready to play today- far ahead of its official launch in December. This exhilarating Sonic game is compatible with the proprietary Bluetooth gaming controller being offered with the tablets.

Tails has been added as a special unlockable character for this remade version of Sonic CD! Available from your second playthrough onwards, players will now be able to save Little Planet as Sonic’s high-flying companion, Miles “Tails” Prower!