Now I’ve been reading up on the Retro Engine it seems like quite an amazing piece of software and best of all- it isn’t tied to Sonic games! If you ask me SEGA of America needs to snap Whitehead and his fantastic engine up ASAP. Give the guy a team even a studio of his own and put them to work on other SEGA classics. Why? Because SEGA’s back catalogue is a potential goldmine and they could double their money (and reputation) if they can promise to deliver more classic SEGA ports at this high standard. 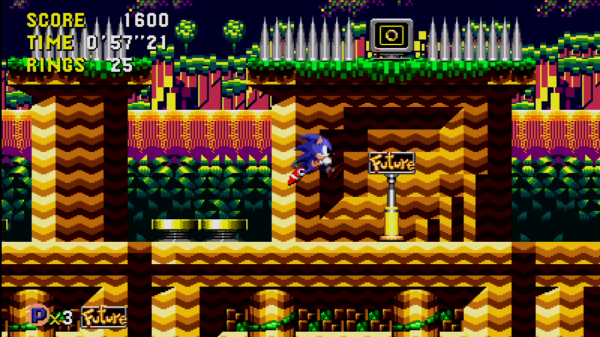 Eventually SEGA’s classic games are going to need to be delivered in 60fps, 1080p and all the rest and it seems like the brilliant Retro Engine can do all this and more. Can you imagine Streets of Rage or Comix Zone? Hell, even Shining Force 2 or Phantasy Star 4 remade with the care that Sonic CD had? Just give yourself a minute to think about your favourite classic SEGA IPs…

Heck, by what I’ve seen on forums Whitehead has already won a lot of Sonic fans over and has quite a following. Give him a studio and a blog to chat up the fans and watch the Sonic fans flock to buy up all those classic SEGA IPs religiously.

SEGA of America have said they are serious about becoming a leading digital game developer/publisher, well I think getting Christian and his engine onboard would be a huge step to achieving that goal.  DO ET!

15 responses to “Sonic CD is out, it’s cheap and it’s really, really good!”