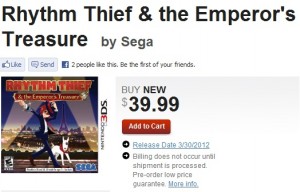 According to both GameStop and Amazon.com, Rhythm may be delayed until the end of March. Given that multiple retailers are delaying the game, it would appear that it is indeed happening. No official word from SEGA though, so there’s still hope that the game is still releasing as scheduled next month.

Rhythm Thief is an upcoming rhythm game for the 3DS, with an animation aesthetic similar to Professor Layton and homages to a couple other SEGA rhythm games, including Space Channel 5 and Samba De Amigo.