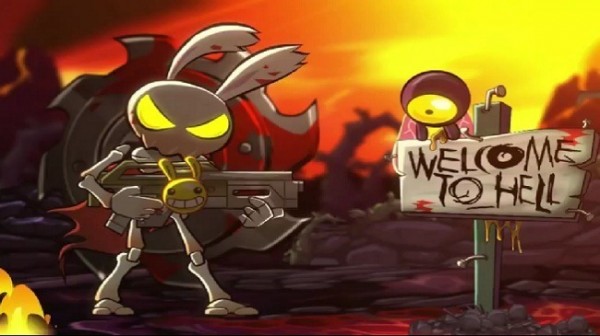 What happens when you take Sega’s special brand of lunacy, a Western developer, a digital platform, and toss it all in a blender? This game. I didn’t really care for Hell Yeah’s debut trailer or initial screens. Perhaps it had something to do with the opening trailer’s focus on gore, I’m not really sure. All I did know was I was disinterested. Needless to say, after playing the demo, my interest has been caught. 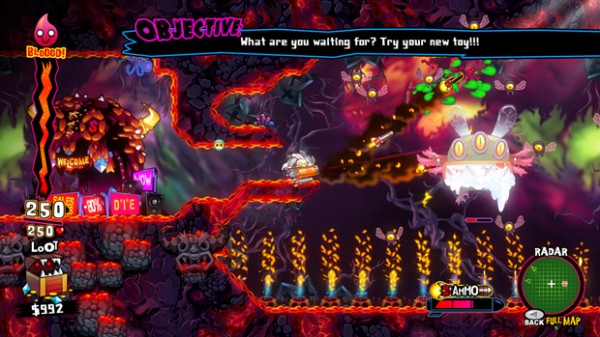 Firstly, the visuals: HY is goregeous.  No, that’s not a type-o. This game looks great and it’s also gory as all hell. The game’s style wreaks of Roman Dirge and Jhonen Vasquez’s influence, resulting in a game that is very colorful, cutesy, stylized and of course…as blood soaked as a slaughter house meat grinder. The game’s animation is limited, and doesn’t really move as slick as retail side scrollers like Rayman Origins, but if you’re a fan of Vasquez and Dirge, or just love stylized 2D games, you’re going to like HY’s look.

The game play is a bit different from your standard platformer. In the opening moments of the game, it feels like any other platformer. You jump around and collect things. A couple minutes in, you meet your undead…octopus bulter, and receive a chainsaw you get to ride around in. This is where the game distinguishes itself: the buzz saw is very floaty, and with it you can climb on walls, drill through certain surfaces, and make high, floaty jumps into the air.

The main focus of HY, or at least its first level, is killing monsters. The monsters themselves are fairly easy to kill, as are the smaller, weaker enemies found throughout the game. The trick here is figuring out how to kill them. Most enemies have a weakness that can be exploited either through the environment or by obtaining a new weapon. One enemy, a pile of smiling crap with a chainsaw sticking out of its head, is initially invincible because it’s dug into the environment and can’t be approached. The player can circumvent this defense by exploiting some destructible ground, allowing them to dig around and find its soft underbelly. Another enemy, a giant floating brain, can only be killed by obtaining a rocket launcher from the store, allowing the player to hit it from a distance. 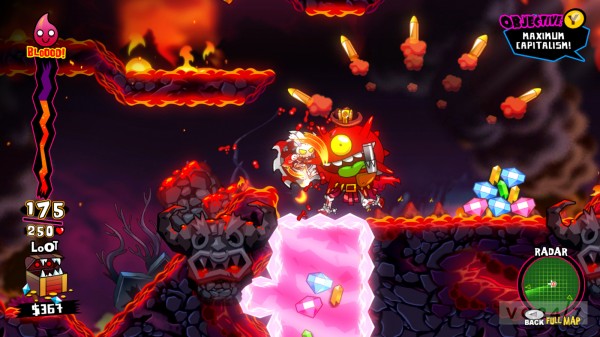 Once the enemies are killed, the player enters a brief mini game. In the demo these mini games where simple button mashers, but as the demo went on they slowly became more elaborate. For instance, when you kill the aforementioned giant floating brain, you are given a multiple choice question: what is the average life span of a bunny? Not knowing the answer, I naturally went with “WTF”, and the brain exploded.

At a basic level, Hell Yeah is well-made. It is visually impressive and the controls, while they take some getting used to, work well.  What will make or break this game is its level design. The first level feels like an introduction to a very good game, but in the end it was effectively an introductory and tutorial level. This makes Hell Yeah!! a very hard game to read. I won’t say the game looks like it’ll be great, but it most definitely has the potential to be. It all hinges on how creative (or mad) the people over at Arkedo Studio are. At the very least, this is a good start.

Hands-on with Rhythm Thief: Find out why this should be on your radar
Hell Yeah!