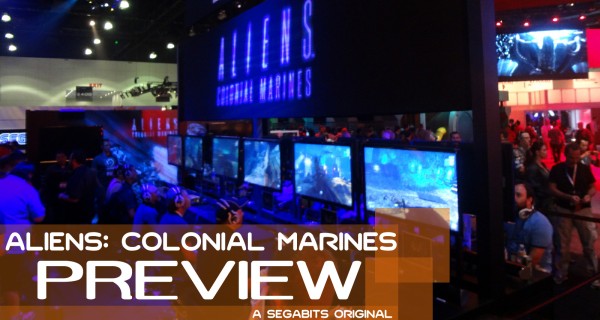 SEGA and Gearbox have been very hesitant about showing off their new Aliens game to the public. Announced in 2006, the game’s last E3 appearance consisted of a live, demo unplayable on the show floor, and the game’s appearance at PAX was similarly limited to an unplayable demo followed by an interactive multiplayer.

This year, SEGA has finally put Aliens on the show floor in an accessible way, and I finally got to play. It’s still a multiplayer only demo and players only get to play as the marines, but it still gave me probably my best look at the game so far. I am not a particularly huge fan of the franchise, so please forgives any screw ups I make in regards to names. 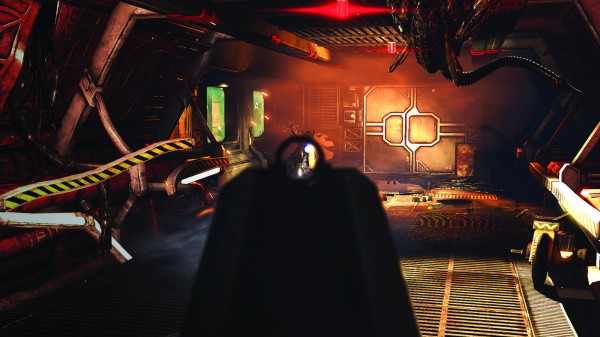 The best way to describe the Marines versus Aliens multiplayer mode may be…a player vs player version of Gears of War’s Horde mode. The map available was fairly small. Initially, the instinct of every player was to go off on his own to kill Aliens. This, unsurprisingly to any Aliens fanboy, resulted in the quick and brutal death of everyone. After a few respawns though, it seemed everyone began to get it. Instead of spreading out, players began to clump up, team up, and try to watch each other’s back, the sort of tacti the Marines utilize in the Aliens movies. The fact that all players eventually began to do this, after failing so horribly early on, shows that at the very least this is a very effective multiplayer mode for an Aliens game. 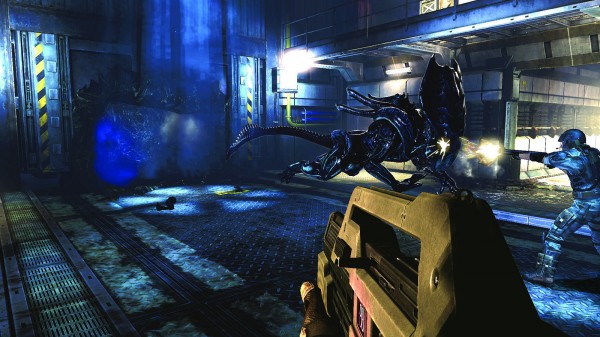 This may seem like an odd, cumbersome concept to FPS players used to the aforementioned Halo motion tracker, but it’s a critical part of what makes Aliens: CM’s multiplayer unique: the atmosphere. I’ve played my share of first person shooters, and none of them had much of an atmosphere to speak of. Even though the games themselves often had brilliant atmosphere, the multiplayer always felt like an arcade game. Here, it’s all about a sense of dread and vulnerability, enhanced by the fact that the aliens actually have a human level of intelligence behind them, and not some AI. This is all made possible thanks to the motion tracker and its ominous beeping as Aliens close in on you.

There were two kinds of Aliens on display in the demo, the drones from the movie and a huge and powerful Crusher. They are both controlled in a third person perspective, affording them a better view of their surroundings. The drones can climb around on the walls and ceiling, giving them plenty of opportunities to ambush players from above or behind. Their freedom of movement and different perspective force anyone playing as a marine to constantly be on edge, checking the ceiling and their motion tracker constantly. The crushers, while not as agile as the drones, are much stronger and capable of easily killing any marine who can’t get out of its way quickly enough. 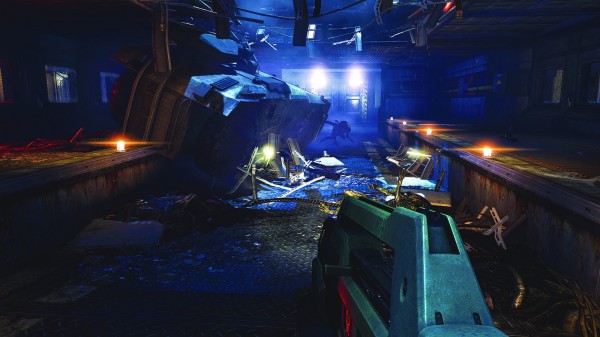 This is the closest a multiplayer mode has ever felt to a genuine campaign. It is rare for a first person shooter to effectively integrate two distinct play styles in one game because of the additional programming and balancing involved. This makes Aliens multiplayer feel very refreshing in a world replete with Halo and Call of Duty derivatives.

For all the fun I had though, there are some issues. First and foremost, I’m not sure how much longevity this mode will really have. Even by the end of my play session, I could tell that after a few hours of this I couldn’t really see myself coming back to it. In order for this multiplayer mode to be endearing to me, it’s going to need more variety. More weapons, more alien types, and more game modes. Hopefully there will be some nice objective based modes in the final game.

The graphics seemed stiff. It’s pretty clear to me that this game is pushing the Xbox 360 to its limits, because it doesn’t look as good as the PC footage I’ve seen. It didn’t affect the game play, but Aliens fans may want to consider upgrading their PCs to enjoy the version with the best graphical fidelity. 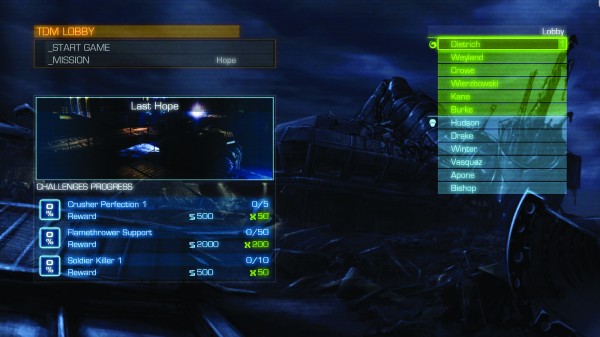 The Aliens multiplayer session I played was a lot of fun. The atmosphere is very effective. The game play is unique. It encourages players to work together in a group, something I have rarely ever experienced in other first person shooters. I can only hope the final game is as fun as this play session.

Jason Berry will be posting his own preview of the game later. Aliens Colonial Marines is scheduled for release on the Xbox 360, PS3 and PC in February of 2013. The Wii U version has no confirmed date.