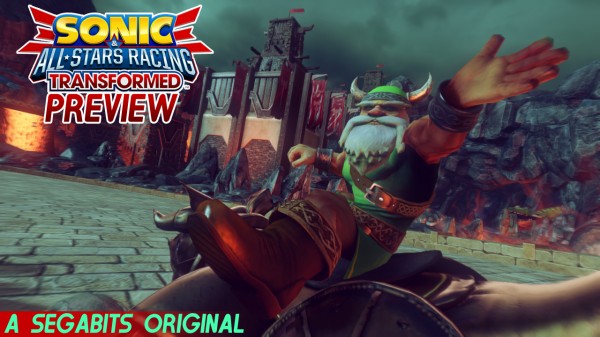 Whether you like or hate Danica Patrick, every SEGA fan has to be happy with the overall line up revealed for SEGA’s upcoming racer. Vyse, Gilius, Joe Musashi, not to mention stages from Golden Axe and Panzer Dragoon make this game the best SEGA mascot mash up made in eons.

If the newer E3 build is any indication, development for ASRT has progressed splendidly since the press briefing back in April. The frame rate has smoothed out and chugs far less, and while it still isn’t perfect, it is very quickly getting there.
The new items on display are also a step up. The ice item from the last demo is now a rapid fire weapon, allowing the player to fire three dumbie fire shots in quick succession and cover racers in ice. A catcher’s mitt has now replaced the green shield from the last game and instead of just deflecting weapons, it catches them and allows the player to throw them back! Finally, the homing rocket of the last game has been replaced with a miniature RC car of the character firing it. These weapons represent exactly what the weapons of the original ASR lacked: creativity. They are more than just analogs for Mario Kart weapons, they are original weapons with their own attributes. 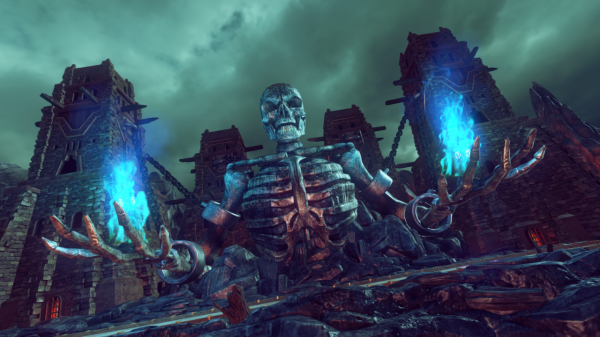 Everyone’s seen the Golden Axe level, and it’s as cool to play as it looks. The course focuses mostly on boating and flying, though the road sections have plenty of paths with tight turns that wind under and over one another. The flight areas provide far more things to crash into as well, and some nice opportunities to pull off cool tricks. Perhaps some of you have seen the giant monster in the flight area? You can fly through its mouth. You can also fly through the flames in the hands of the giant skeleton. Both tricks are difficult to pull off and reward the racer with an item box. The boating areas don’t offer much new in the way of difficulty, though the lava doesn’t produce quite as many waves as the water areas in the Panzer Dragoon or Monkey Ball stages.

Finally, we have the new racer, Joe Musashi. For a character from a franchise renowned for superb controls, he is surprisingly touchy. The controls for Musashi are very sensitive, making it very easy to oversteer and crash into walls or drive off the track, though Sumo did say they were still tweaking the controls. Given ninjas are known for their quick reflexes, it would make sense that Musashi’s controls are more sensitive, though only time can tell whether or not there is any inherit benefit to using him. 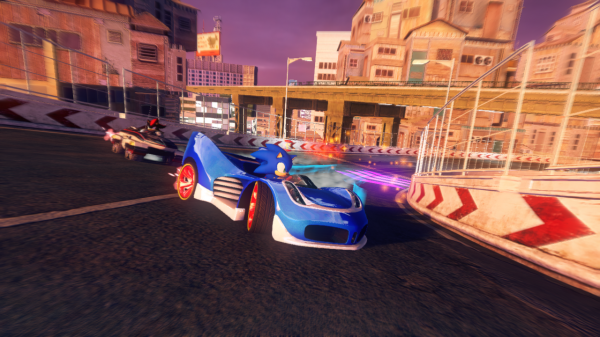 Overall, Sonic and All-Stars Racing Transformed is progressing well and the character line up continues to shape up into one of the best SEGA All-Star casts to grace a game since SEGAGAGA. With Musashi and Vyse confirmed, and Panzer Dragoon getting a stage, there are only a few more franchises I hope to see represented. How about some Segata Sanshiro, NiGHTS, and Ristar Sumo? Come on, you know you want them too!