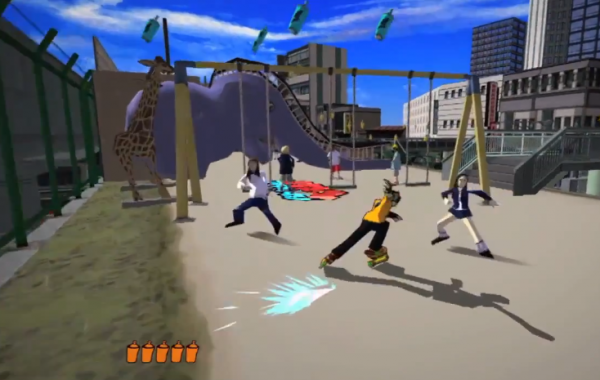 Achievements for the upcoming release of Jet Set Radio HD have been revealed, and with them comes a hint towards a bonus that SEGA has yet to speak of. At the top of the list of thirty achievements is one titled “Back to the Future” with the description “Unlock all songs in the bonus menu”. To my knowledge, there was never a bonus menu that unlocked songs in the original game. There was a sound test, but that was complete from the start. No unlocking necessary. The achievement’s title mentions “future”, which of course was in the title of the franchise’s second game Jet Set Radio Future. Could SEGA be adding an option to play select tunes from Jet Set Radio Future? Or is it simply a nod to the sequel and nothing more? After the break, the full list of achievements.

Number one artist 20
Use all graffiti in missions

Dog runs too! 20
Unlock Pots and use him as a player character

Look behind 5
Perform a Turn Trick in game

King of the street 10
Complete all missions with any rating

Feel the beat 5
Start game for the first time

Tag you’re it! 10
Tag out at least one rival gang member within 30 seconds

Public menace 10
Make 100 civilians jump out of your way

Scrapyard bully 5
Shove the two civilians in No.540 level before the choppers show up

The gang’s all here 20
Unlock all characters

Remixes suck! 5
Complete a level without collecting a Recovery Spray Can

I got Soul 50
Collect all Graffiti Souls

So creative 10
Create a graffiti in all sizes

We got us a crew 5
Unlock Gum and Tab