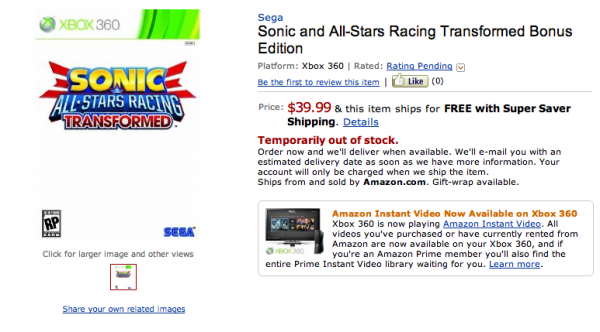 Amazon.com and Amazon.co.uk have updated their product pages for Sonic & All-Stars Racing Transformed with prices, mention of a “World Tour” mode as well as a Bonus Edition. The 360, PS3, 3DS and Vita versions are listed as being a “bonus edition” of the game, but no mention is made as to what that bonus is. Given that the games are listed as “out of stock”, and pre-orders have yet to open, don’t expect a reveal of the bonus until the game is available for pre-order. The price for the 360 and PS3 version is currently $39.99, $10 less than the first All-Stars Racing game. The Vita and 3DS versions are priced at $29.99. As for World Tour mode, this is most likely the story mode in which you island hop and unlock racers. The Wii U version has yet to appear on Amazon, but a listing for it has appeared at Game.co.uk for £49.99.