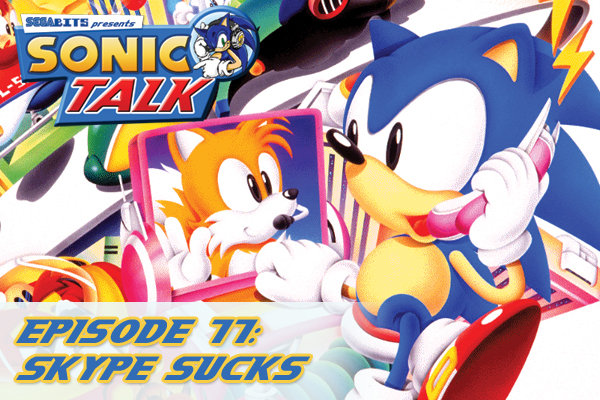 The internet is a very confusing thing to me sometimes. It carries a ton of data at insane speeds over phone lines and even wireless. The same kind of phone lines that we’ve been using for decades to have conversations. SO WHY CAN’T WE HAVE A PROGRAM THAT ALLOWS US TO HAVE CONVERSATIONS THAT DON’T DROP OFF?!! It’s really insane. It was so bad, I gave up a few times and this episode was originally in six pieces until I wrangled everything together. If you didn’t care for Episode 10’s 3-Hour podcast, you’ll be happy to know that this one comes in just barely over an hour.

Also, sorry for the poor audio quality of the intro. I was trying to do something funny and failed. (Also, I need to keep my fan away from the mic.) Read on for this week’s topics.

This week’s topics include…

The 3DSXL! Both me and Nux have the new system and we’ll be going into detail on our feelings on the system.

Comic Con and Sonic Boom. We were there and it was awesome!

SAASRT Wii-U details. Can play on controller only, use full map hub and weapon camera so you can see your missile hit close up.

All Sonic racers announced for SAASRT. This awesome love letter to Sega has less than a third of it being Sonic characters despite the game being heavily marketed as a Sonic game with the Sega part taken out. Why are they hiding all the Sega love?

Ken Penders news. Him and his legal team have to pay out $13,000 in sanctions for missing a deadline. Scott Shaw and Sega grab up Sonic copyrights.

Again, sorry about the fan. XP