Fourteen years ago today, in Japan, the final SEGA console released: the Dreamcast. Of course, being an English speaking blog, we tend to put more emphasis on 9-9-99. Still, 11-27-98 is just as, if not more, important than any other Dreamcast launch date simply because it was the first. Also, it is the day before my birthday. A-hem! Anyway, Japanese launch titles included: Sonic Adventure, Pen Pen TriIcelon, Godzilla Generations, July, and Virtua Fighter 3tb. July and Godzilla Generations never made it outside Japan. Considering Famitsu gave Godzilla Generations a 20 out of 40, and Western import reviews were even worse, it seems those outside Japan weren’t missing out on Godzilla.

To celebrate, enjoy the hilarious Japanese Dreamcast commercials starring Senior Managing Director of SEGA Hidekazu Yukawa. The man truly was the Segata Sanshiro of the Dreamcast era, though he acted the complete opposite. Yukawa appeared on the Japanese Dreamcast box, he had his own game, his own merchandise including a cell phone charm, and even appeared in a cameo in the Shenmue demo “What’s Shenmue?”. You can see a complete playthrough of that after the break. Happy 14th Birthday, SEGA Dreamcast!

To commemorate today, I’ve created a special header image that will join our rotating banners. If you don’t want to wait for it to show up, here is how it appears: 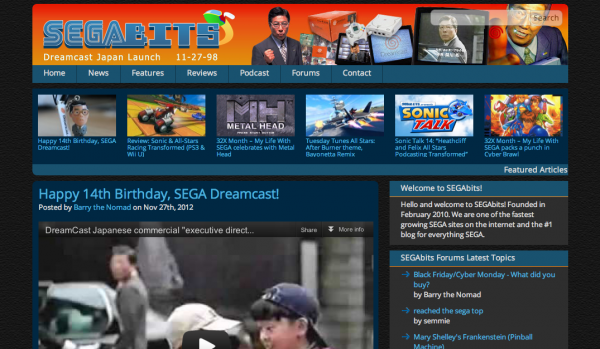