Welcome to our review of Aliens: Colonial Marines. See that YouTube video embedded above? It is our very first SEGAbits Video Review! We’re trying to sort out a way to get these video reviews put up for all upcoming games. Seeing as how this is our first one, there is always room to improve. So positive criticism is definitely welcomed. Let us know what you think in the comments section. After the break, an old school written review. 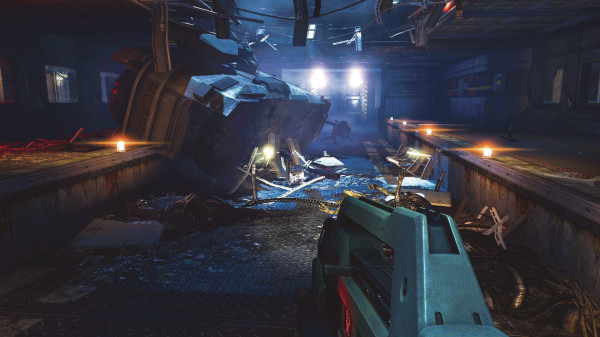 Aliens: Colonial Marines is supposed to take place seventeen weeks after the events that occurred in 1986’s Aliens, giving you control of Corporal Christopher T. Winter. In the game, your ship is sent out due to receiving a distress signal. I would tell you more, but the story is very cliche space marines sort of stuff that wasn’t done very well. The script in the game is terrible, with cheesy lines like “it’s a sex thing” when a male character talks about his relationship with a female. Very macho. 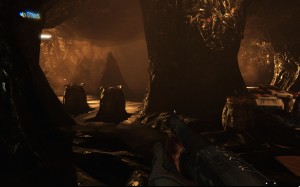 That is just one major issue with the game. The story is confusing, and in the end why should you care about these characters? There is not an ounce of character development in the game. They try to force a love story between one of the Marines, then at one point you find out the female in the relationship (Bella) is infected with a chestburster. You would expect a sad scene, maybe something character changing, but all that happens is that Bella throws up and you move on with your mission.

The developer tried to put all the ‘big moments’ and concepts from the movie franchise into the storyline. One of the issues with this is that the Alien concepts and big moments have already been replicated in many modern games, so much so that Aliens: Colonial Marines doing it poorly now just makes it look even worse. 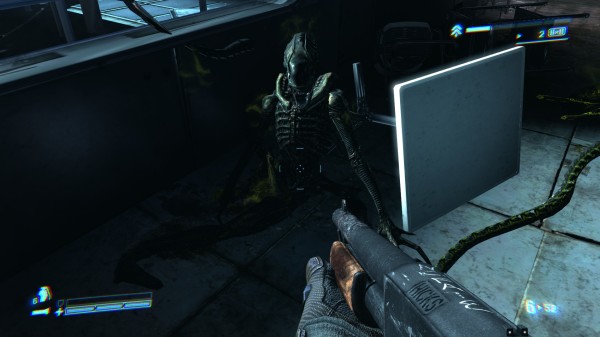 Given that the game had years of planning and post production, yet they screwed up the story, this could only mean that they redeemed themselves with the controls… right? Sadly no, the aiming on all the weapons feels odd and weapons aren’t very balanced. The shotgun is grossly over powered and is the easiest to aim. You don’t even have to be close to the Xenos to actually cause them damage, they can be far away and it will still kill them. The game doesn’t have limited slots for guns, so you will have a big arsenal of weapons at your disposal. This is a major negative aspect to Colonial Marines. Giving you less guns forces you to conserve ammo, creating more of a survival feel that I wish they went with.

Aliens: Colonial Marines has you fighting Xenomorphs and Weyland-Yutani soliders, with you eventually fighting both at the same time, but these parts are actually easier due to the ‘all out’ nature of the fighting between the three. Level design is big in video games and sadly Aliens: Colonial Marines is designed by the most unimaginative morons that it isn’t worth playing. You have only two real enemies throughout most of the game, with the xenos just rushing at you as you mow them down. You are literally killing armies of these things, and their presence means nothing since you have been mowing them down the entire time. Then you have Weyland-Yutani soliders who just stand behind the nearest cover and shoot. Very basic AI on both ends makes the game feel like a brainless shooting gallery. It’s frustrating because there are so many cool things that could be done with this franchise. 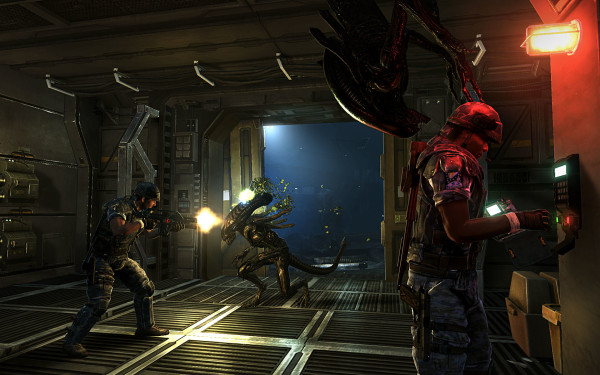 For fans of the franchise, you do visit Hadley’s Hope colony complex early in the game, which is a nice throwback to the movies. The

issue is that Hadley’s Hope was nuked, while in the game it’s a fully erect colony complex. Of course I’m willing to overlook this flaw since I like revisiting movie areas in their games and if this was one of the only issues with Aliens: Colonial Marines we could have counted ourselves lucky. The game also has moments where you will have to go to three or more points in the map (usually pulling switches or something similar) and then come back to continue the level. I think the young kids call these sorts of missions ‘fetch quests’ and it is sad to see such unimaginative objectives repeated in a game that isn’t very long. I beat this in 6 hours and I’m sure most of you will do it in under that.

There is one act in this game where they decide to take away all your weapons and force you to sneak past boiler Xenos (a new type of Xenos introduced just for this title). Basically you have to walk by slowly, if they hear you they will run up to you and blow themselves up. I really wish they would have focused more on this sort of stuff instead of the dumbed down Call of Duty gameplay they decided to go for. 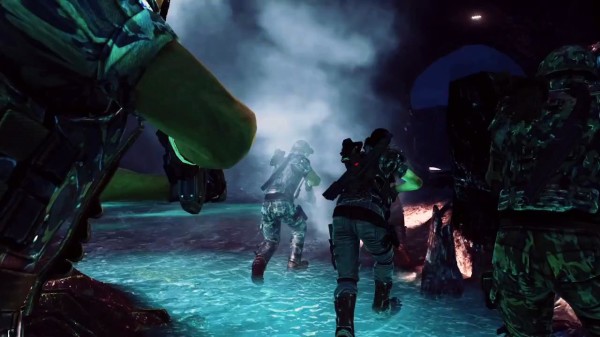 [One of my favorite areas in the game.]

When Aliens: Colonial Marines was being hyped at E3, Gearbox Software made a big deal about their lighting engine. They talked about how it was going to be next generation sort of lighting, but when you play the final product the only generation the lighting looks like is early current generation. The levels are very dark, even on the highest brightness, and for good reason. The textures are ugly. Why make a good looking game when you can just hide all the ugly textures in the dark?

When you do go out on a planet you aren’t greeted with anything new. It’s the same cold brown dirt with ugly textures, same looking buildings that you are used to seeing in every space game. Being inside buildings brings you to long corridors. There are points where they change it up and sometimes I thought they used some nice colors, though those moments are few and far between. I could see this game being praised for graphics if it was an Xbox 360 launch title, but that was years ago. Gearbox Software simply did not deliver the beautiful game they promised. 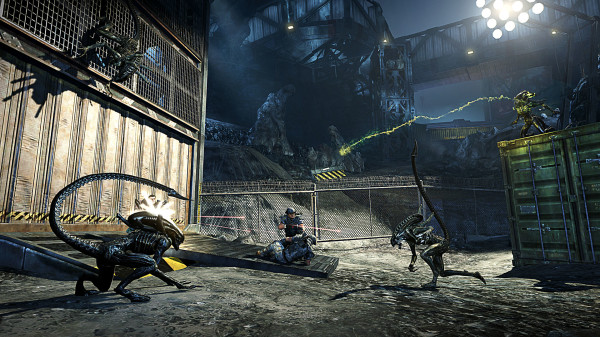 The multiplayer modes aren’t all that bad. They give you 4 player co-op, meaning you can play the campaign with friends, and to be honest that is the way to play the game. It’s much more fun watching a bad, cheesy movie with friends than it is by yourself. Does it make all its problems the go away? Nope.

As for multiplayer modes in the full title: 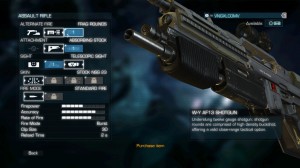 The issue I have with the multiplayer steams mostly from how few maps the game has. I really liked playing escape, but felt angry when I found out there were only two maps to play in. How boring is that? Not to mention it is already hard finding games for this title and the lack of maps isn’t helping it. Also the Xenos’ controls feel a bit clunky and hard to get used to, Marines are definitely easier to play as.

The game features progression much like Call of Duty where you will upgrade your weapons with XP/perks, you will recieve this from either playing the single player modes or online. It is nice that they allow you to do it offline, especially for those that don’t enjoy playing online games. 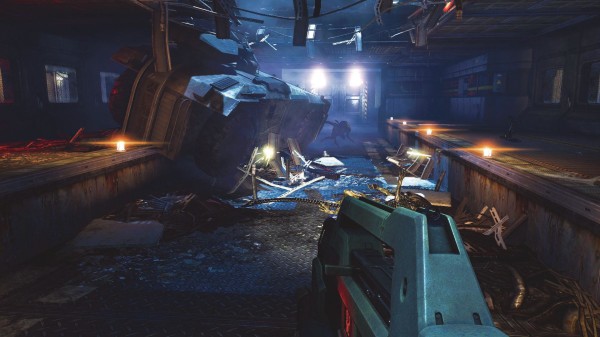 What is there to say? The game has outdated graphics, bad controls, and isn’t really fun to play in single player mode. Multiplayer is better, but the lack of maps and lack of people playing it really kills that portion of the game. Not to mention SEGA will be charging for future updates and maps, which is a bit cheap seeing as this game is already lacking maps and is broken. It just feels like a bigger rip off knowing that you need to pay more than the full retail price they are selling it at to get the ‘full experience’.

Even if SEGA were to go in and fix the controls and graphics, the game wouldn’t be worth playing. It would make the uninspiring level design, weak AI and other flaws easier to swallow though. 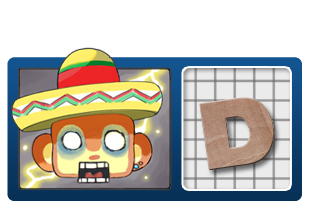 “Buy this game if you hate yourself.”