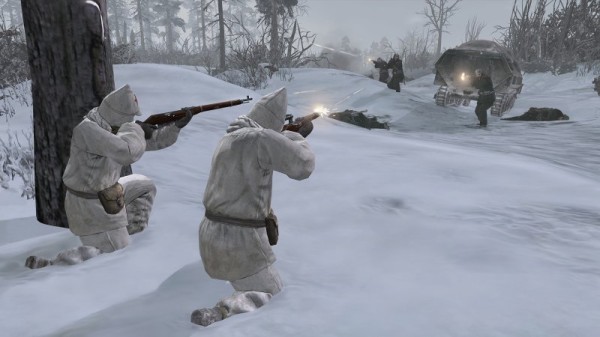 SEGA and Relic are teaming up with ‘participating retailers’ worldwide and offering up some pre-order bonus DLC. The DLC is titled ‘Theatre of War‘ episode, which will be a mini campaign of sorts. It will also come with multiplayer vehicle skins and two additional commanders for each multiplayer army.

Besides that, if you pre-order now you get access the the beta (which started on April 2nd). Hit the jump to read the full press release.

Pack to include Theatre of War mini-campaign, new Commanders and exclusive Vehicle Skins

Eligible customers will get access to a ‘Theatre of War’ mini-campaign when it becomes available post launch, allowing them to experience a new single player story from another part of the war. They will also receive the Winter Ambush and Voronezh Front skin packs to customize the look of their multiplayer vehicles.

As well as the single player content and multiplayer skins, eligible pre-order customers will receive two new multiplayer commanders to customize each army. The German army will receive the Joint Operations Doctrine, specializing in precise artillery strikes and the Offensive Spearhead Doctrine for players who want to use heavy armor and airstrikes to crush their opponent. The Soviets will unlock the devastating Anti-Infantry Tactics Doctrine, enabling units like flamethrower tanks and the Conscript Support Tactics Doctrine which allows for rapid reinforcement in the heat of battle.

Greg Wilson, Producer of Company of Heroes 2, commented, “We are pleased to be able to reward our most loyal fans for pre-ordering the game with this pack. These items will give them bonus single and multiplayer content to enjoy.”

Underpinned by the cutting-edge Essence 3.0 Engine™, Company of Heroes 2 brings tactical strategy to life like never before, thanks to the realistic ColdTech™ weather system, the revolutionary dynamic line of sight system TrueSight™, and realistic destructibility.

The original Company of Heroes™ was released on the PC in 2006 to critical acclaim and is currently the highest rated strategy title on Gamerankings.com (with more than five reviews), with an average of 93.82% based on 56 reviews. The game features similar acclaim on Metacritic.com with a Metascore of 93% based on 55 reviews.

Company of Heroes™ 2 will be available for PC in June 2013. For more information check www.companyofheroes.com, and to download SEGA game assets, please visit www.sega-press.com.

About Company of Heroes™ 2

It is 1941 and the beginning of what will become the most brutal conflict of World War II, as Germany launches a full-scale invasion of the frozen tundra of the Soviet Union which would result in over 14 million military casualties. Take command of the iconic Soviet Red Army in brutal frontline warfare to free Mother Russia from the invading Nazis. Your strategic skills and tactical expertise hold the power to tip the very balance of this conflict in the sequel to the critically acclaimed and multi award-winning Company of Heroes. Engage in visceral tactical combat that will define you as a military leader and challenge you to wield the might of the Soviet Empire as you smash your way to Berlin.

About SEGA® of America, Inc.

SEGA® of America, Inc. is the American arm of Tokyo, Japan-based SEGA® Corporation, a worldwide leader in interactive entertainment both inside and outside the home. The company develops, publishes and distributes interactive entertainment software products for a variety of hardware platforms including Windows PC, wireless devices, and those manufactured by Nintendo, Microsoft and Sony Computer Entertainment. SEGA® of America’s Web site is located at www.sega.com.

SEGA® Europe Ltd. is the European Distribution arm of Tokyo, Japan-based SEGA® Corporation, and a worldwide leader in interactive entertainment both inside and outside the home. The company develops and distributes interactive entertainment software products for a variety of hardware platforms including Windows PC, wireless devices, and those manufactured by Nintendo, Microsoft and Sony Computer Entertainment Europe. SEGA® Europe’s Web site is located at www.sega.com.