Dengeki Bunko has announced that they will be collaborating with SEGA for a couple of projects to celebrate their 20th anniversary. The first project is ‘Sega Hard Girls Story’, a SEGA-themed novel serial that will be published in Dengeki Bunko Magazine. The novel is set to re-imagine SEGA game systems as goddesses, who go all over modern Japan doing goddess business.

If you didn’t know, these goddess version of SEGA consoles where designed by the same designer that did Hatsune Miku. He will return to create updated designs for the characters, Tōru Shiwasu will be taking over writing duties. The story isn’t amazing, its basically about a girl named Takeo Kanbara, who has a father that happens to be a priest. He ‘summons’ his daughters and introduces them to a young girl their age, who just happens to be a goddess. The series is set to debut in Dengeki Bunko Magazine’s 32nd issue on June 10th. 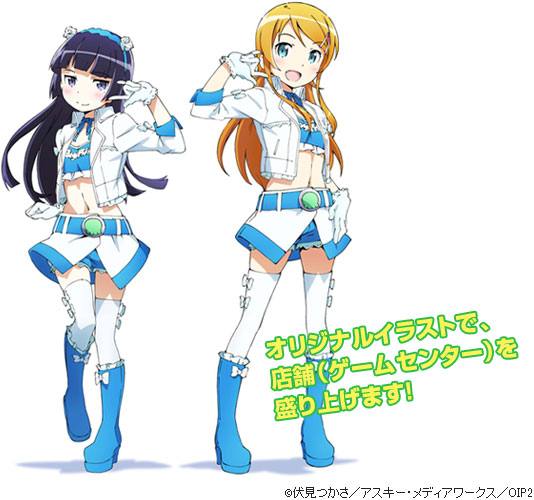 See these two young ladies? They are Kirino and Kuroneko from the Denkei Bunko light novelization named Oreimo. The above is a promotional image of the girls dressed up in SEGA game, they will be plastered all over SEGA’s arcade’s all across Japan to celebrate 20 years of the magazine.