Are you ready to kill some motherf***in’ mutants?

Hitting the App Store today for $4.99 is the mobile port of SEGA’s The House of the Dead: Overkill, dubbed “The Lost Reels”. Via the App Store description comes a slew of features:

DISCOVER THE LOST REELS
▪ Experience 3 goregasmic worlds full of carnage in Story Mode.
▪ In Papa’s Palace of Pain, Ballistic Trauma, and Naked Terror, you’ll be screaming ‘til your last breath.

DISMEMBER UTTERLY DISGUSTING MUTANTS
▪ Enjoy non-stop shooting action as you blow apart mutants for high-score thrills.
▪ See how long you can hold off the swarms of undead in Survival Mode.

REJOIN THE ORIGINAL CAST
▪ Isaac Washington: a hard-drinking ladies’ man who deals damage in droves.
▪ Agent G: an inexperienced but deadly assassin who keeps a steady hand under pressure.
▪ Varla Guns: the hottest stripper on the Bayou City club scene who enjoys the largest clip.
▪ Candi Stryper: an expert with her hands who knows how to reload.

FINGERBLAST ON THE GO
▪ Obliterate mutants with one of three control mechanisms optimized for your mobile device – Accelerometer, Virtual Pad and Frenzy Tap (unlockable)

UPGRADE YOUR ARSENAL
▪ Destroy mutants to earn Ka$h, the in-game currency, and upgrade your pistol to something that really blasts through flesh.
▪ Enhance your killing prowess with combo extenders, reload boosters, and other game-changing upgrades.

But that’s not all! The game also features some super sweet bits of SEGA fan service. Want to know the details? Hit the break for our impressions and stay tuned to SEGAbits and The Website of the Dead for our reviews. 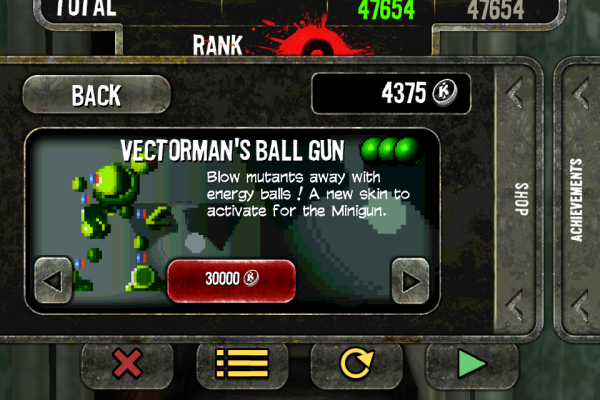 First the good news. SEGA has slipped in some SEGA fan service by way of two weapons skins. The first is Vectorman’s Ball Gun from the 16-bit classic Vectorman. The second are Ninja Stars from the Shinobi series. Pretty cool weapons, eh? The game itself plays like a miniaturized version of the console title, offering up two full stages with cutscenes acted out via static drawings of the Overkill characters. Isaac Washington still drops F-bombs, but only in text form. Player characters do not, from what I’ve heard, speak. This may annoy some fans, but it has also helped to keep the file size small at a very comfortable 99 MB (compare that to Sonic 4 Episode 2‘s 436 MB size). 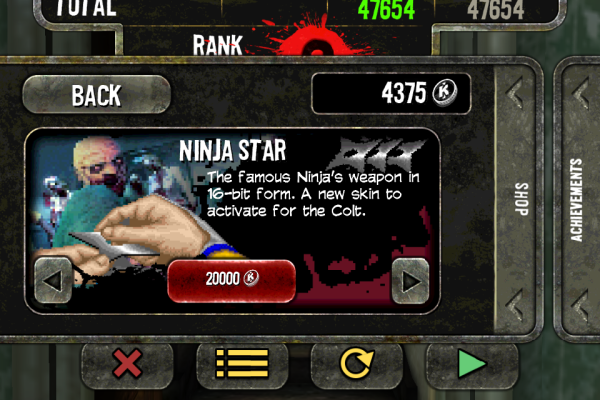 The controls come in two styles: Accelerometer and Virtual Pad. Thus far, I’ve played with the virtual pad and it is surprisingly smooth and accurate! Far better than playing with a Saturn or Dreamcast pad. There is a special tap anywhere on the screen to shoot mode that is unlocked once you complete the game. The only annoyance that I’ve encountered is that the game’s third world, “Naked Terror”, is an additional $1.99 via an in app purchase, making the full game $6.98. It probably would have been wiser to simply price the game at $6.99 and do away with that extra surprise. Or, make the app free, make the first world free to play and make the additional two chapters $2.99 each.

In any case, the game is fun thus far, production values are solid, there are cool bits of fan service and file size is small. Check it out! For those waiting for an Android release, stay tuned! It should release very soon.