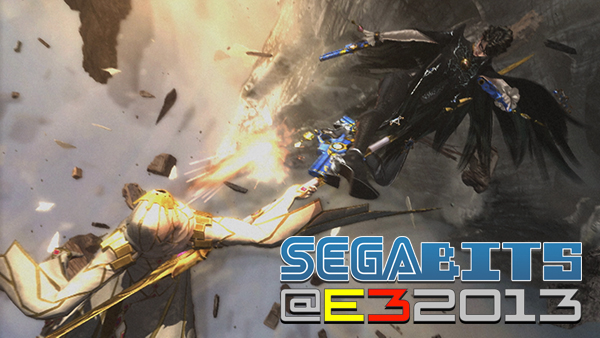 I will confess, SEGA’s line up does not exactly blow me away this year. I am out of my depth when it comes to PC strategy games and as much as I love Sonic, I need more to sate my SEGA hunger. After experiencing other E3 lineups that had the likes of Vanquish, Shinobi, Anarchy Reigns, Yakuza, and House of the Dead Overkill: Director’s Cut, the line up at the SEGA booth this year feels sparse and not quite as exciting.

I personally consider Bayonetta to be the best action game of the last generation. The action was fast and fluid, the combat was easy to understand and rewarded players who took the time to understand its nuances, and the set pieces were epic in the “before the internet ruined it” sense of the word.

Bayonetta 2 does the smart thing and doesn’t fix what is already awesome, instead opting to simply tweak the original game’s formula. People who loved the original Bayonetta will feel right at home here: the combos, dodging and witch time are all here. The gameplay is still incredibly fluid and witch time still feels great to successfully pull off. The game isn’t completely devoid of new game mechanics, though!

Aside from the new online co-operative mode, which was not on display, the game also adds a new move called the “Umbra Climax”. This new move can be activated once the magic gauge is filled, effectively super charging Bayonetta’s attacks and allowing her to perform her hair based “infernal weave” attacks at will for a short amount of time. The game also introduces a touch only mode, a mode for casual gamers who want to control the game with the touchscreen.

What really blows me away are the set pieces on display here. The game starts out with a battle atop a jet fighter, quickly movint to a train after a giant sword cuts that plane in half, and ends in an epic aerial battle with a huge dragon. The entire game is classic Bayonetta, over-the-top gore and all, and it feels glorious. The graphics are also as beautiful as ever, moving at a silky smooth 60 frames with barely a graphical issue in sight, which is very impressive for a game that is effectively still in alpha at least. No matter what is going on, the game never seems to struggle.

If you didn’t like Bayonetta to begin with, what is on display in the demo is unlikely to change your mind. For Bayonetta fans, though, Bayonetta 2 looks like it is going to be a real treat. More of the same is never a bad thing when a game of Bayonetta’s quality is involved.

Bayonetta 2 is expected to launch sometime in 2014 exclusively on Wii U.

UPDATE: Shigs here, this went up earlier than planned so I didn’t get my two cents in. I’d been watching others play the Bayonetta demo while waiting in line and knew it would play just the same as the previous Bayonetta, so I decided to try the touch controls so I could report on something different.

It’s…meh. It’s definitely an easy mode there for the iPad crowd. Swipe the stylus horizontally to dodge/Witch time, swipe up to jump, drag the stylus along to move her and hold the stylus on an enemy to attack. It’s boring. Even tapping an enemy would feel more kinetic and entertaining. Plus, you have to watch the game entirely on the GamePad. Definitely not for me and probably not for most people out there. Stick with the sticks and buttons.