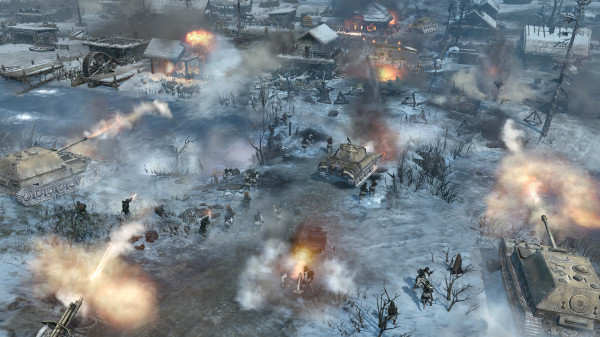 Company of Heroes 2 is an RTS that has you play as the Red Soviet Army fighting against the Germans during World War II. Like most RTS games, the camera view is overhead as you’re building barracks and supplies, selecting troops, fighting the enemy and capturing bases. Since I’m totally out of my element, I selected the easy mode for Single player which has your barracks, supplies and such already built for you (at least in the demo). Since I didn’t have to worry about that, I just sent my troops out into the wild to the nearest base for attack. Unfortunately, since I’m such a noob, my men were getting wiped out and starting to thin. They were even complaining about how their commander (AKA me) was making poor decisions. That’s one thing I really like about this game. The banter of the soldiers is realistic. They complain about their lives and will joke a bit while on their way to the next camp to overrun. I finally got my act together and sent in more troops, jeeps, and tanks to the final location. Which was good because we got overrun with German troops from all sides. But I held it together got more jeeps and tanks out, finally learned how to throw a dang grenade, and finished my mission.

I really liked easy mode in this game. Having the computer micro manage your barracks, buildings, how many soldiers, jeeps and tanks to build left me free to focus on the attack. It made it much more accessible for someone more unfamiliar with the genre (like me) and is a good way to get people new to this type of game to get into it at an easier pace. 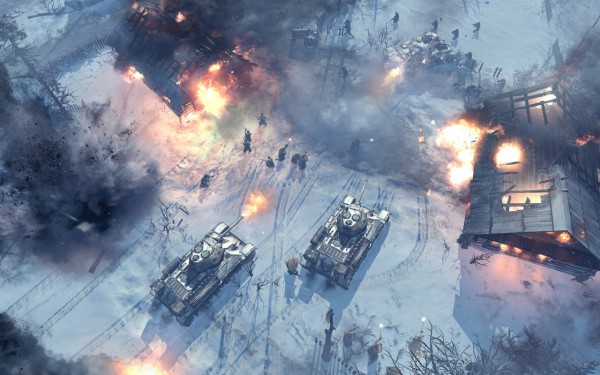 The multiplayer was another beast altogether. Our internet was down, so me and Nux couldn’t fight each other. Instead we both fought an A.I. opponent on easy. However, this proved not to be so easy as they don’t coddle you like the Single Player campaign. You’ve got to build up your barracks, engineers and troops first. Plus, you have to do it fast because the enemy is doing the same and winning points by taking over bases along the way. In my playthough I had to win the game by 500 points or lose by loosing all 500 points to the enemy. If you’re good at the game, it created a nice tug of war between you and your opponent. Me? I just had my ass handed to me.

One problem is that it seemed like I couldn’t build up my troops fast enough to take over some bases, but another thing that makes the game tougher is the new addition of a weather system. Many times I had my troops out on the field when a blizzard would come along. I couldn’t figure out how to get them in the buildings nearby, so I had the engineers build some fireplaces and had them hunker down until the storm passes. If played right, you could use the blizzards to your advantage. One of the folks working on the game told me my snipers were unaffected by the weather and I could use them for sneak attacks. But, since I still didn’t know what I was doing, either some of my men froze to death or just waited out the storm by the fire. Sadly, that slowed me down so much that the enemy won just by points alone. 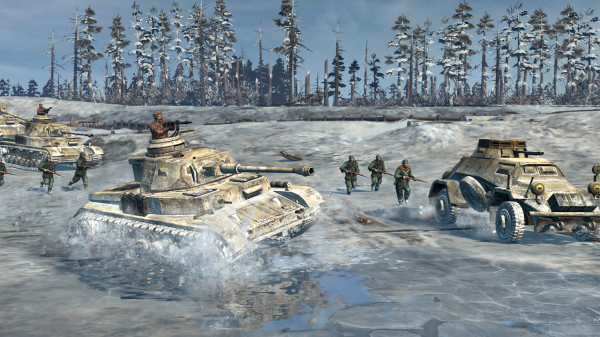 One thing that really stands out in this game is the graphics. The game has a free floating camera that can easily let you zoom in on the action and it looks just as detailed close up as it does far away. It’s pretty impressive. The hud has some great advantages too. With a mini map in the bottom left corner that makes it easy to send out troops to nearby camps while the top right corner allows you to order certain troops to do tasks individually. It makes for good ease of use when it comes to game play.

Overall, I walked out the Company of Heroes 2 demo with a new appreciation for the genre. I haven’t played an RTS since Warcraft, but it’s nice to see how things have improved. The game seems very accessible for new players while still offering plenty of strategy as you learn the ropes. If I had a decent enough PC, I’d check it out myself.

But don’t let that stop you. There’s an open Beta going on right now! So check it out for yourself and see if you want to march into the stores on June 25th and pick up Company of Heroes for yourself. I have a one-on-one interview with one of the developers that will be going up later this week so look for that too.