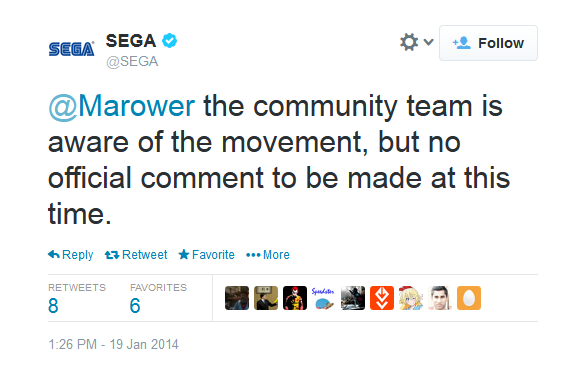 Within the next 24-48 hours I’ll have this up on SEGANerds, SEGABits and SEGAShiro. That’s a grassroots thing and it’s pretty much where my connections begin and end with the press. If you run your own sites and you support this petition, or if you know press who might be interested in this petition give it a forward, spread the word if you don’t mind.

Outside of that, please tweet, revive the #SEGAPCPorts hashtag and get this out to your followers.

A few things; intended launch was at 10 AM GMT, came in a bit late. Signature goal isn’t final and a discussion will take place behind closed doors with the involved individuals (such as grief, who initiated the twitter campaign) as to what the final goal should be.

Thanks everybody for your help and your patience, I hope we can work together to make this happen.

The petition can be found here. If you happen to be a GAF member you can show your support in this thread or discuss it further in our very own forums.

8 responses to “Petition to bring SEGA’s Japanese titles to PC!”