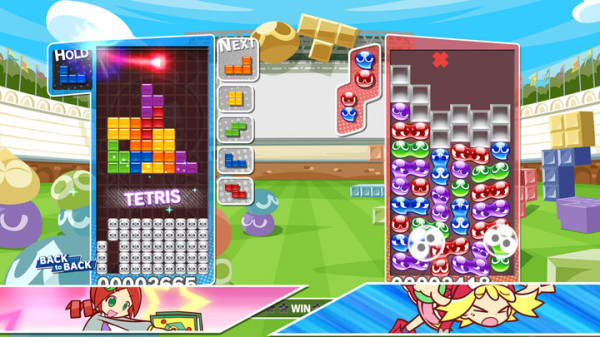 Last week saw the release of one of SEGA’s major Q4 titles in the form of Puyo Puyo Tetris. Whilst  SEGA benefited from multiple SKUs of the title in the charts posting some decent numbers all round, this time however they only manage one SKU but is the decline normal for the series or does SEGA have cause for concern and will the title meet its target? Hit the break to find out how well the latest entry did and how it compares to previous installments;

After just two weeks the 3DS version of the title is already past 25% of meeting the target SEGA set at 200,000 units. Looking at second week sales of select Puyo titles such as Puyo Puyo! for the DS (Week 2 and 3 are opted out but we know it sold 17,085, lifetime sales of 304,618)  and Puyo Puyo 7 (Week 2 sales of 25,693 with lifetime sales of 265,422) shows a mixed picture. Whilst the former sold less in the coming weeks, it went on to sell more than Puyo Puyo 7 which sales only dropped under 15,000 after its fifth week of sales. It does bode well for SEGA meeting their targets for the 3DS version however which was set at 200,000 units as the current title is sandwiched between the sales of both versions.

One version that I fear will not be meeting its target is the Playstation 3 version, after just one week it already finds itself out of the top 20 and according to Famitsu charts, only managing to sell a further 4,485 bringing the total to 16,348. The only console version that we have second week sales of is the Playstation 2 version of Puyo Puyo Fever selling 29,085 with lifetime sales of 176,793. Other console version life time sales we have for first editions;

Interestingly the Playstation 3 version is all but assured to get past Puyo Puyo Fever and Puyo Puyo Fever 2 however the slow down in sales shows that it might not get past the 30,000 mark and will be some point off meeting the target of 150,000 set by SEGA. Whilst the Playstation Vita failed to show up on the Media Create charts, it managed to sell a further 3,283 according to Famitsu bring total sales to 13,022. With a target set at 30,000 units by SEGA it should meet that target by the end of the year one would assume. Unfortunately the Wii U version was a no show on either charts.

So consistent sales for Puyo Puyo Tetris on the Nintendo 3DS and Playstation Vita but disappointing sales on both the Playstation 3 and Nintendo Wii U which again shows Japan’s preference for handhelds over consoles. That wraps up another analyses from me but next week should be exciting, with Ryu Ga Gotoku Ishin releasing alongside Sony’s Playstation 4 on 22nd February in Japan. Till next time folks.