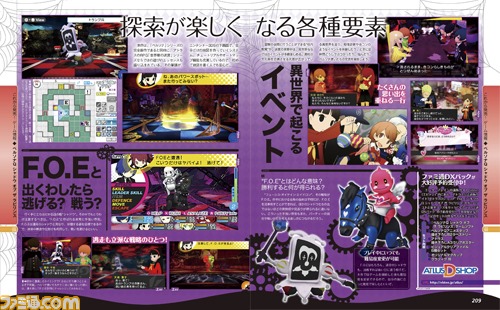 When Persona Q: Shadow of the Labyrinth was announced, it seemed like it would take aspects of the Atlus’ Nintendo DS long running dungeon crawler Etrian Odyssey and according to this week’s Famitsu, I was partly right. They have now said that the game will feature a map-making feature similar to the one featured in Etrian Odyssey games. This map feature will allow users to draw the layout of the dungeon on the 3DS touch screen and help you find your way around.

That isn’t all though, the game will also contain ‘F.O.E.’ monsters and give you a choice if it you are better off running or allow you to ‘try’ and take down the monster. If you do decide to take do F.O.E. monsters, you might just get a special reward.

So Persona Q is Etrian Odyssey with a Persona storyline and characters from Persona 3 & 4. Persona Q is set to come out in America this fall.