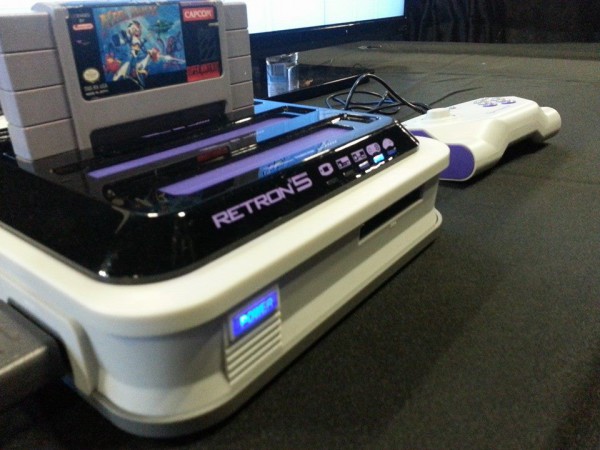 I got to check out the Super Nintendo and Genesis compatibility with the US version of Super Mario World 2: Yoshi’s Island and the PAL version of Mega Bomberman. For the most part, Yoshi’s Island ran perfectly with and without the video and audio filtering, but did notice a few hitches in the game where it would cause the video to stutter infrequently. Mega Bomberman on the other hand didn’t run into these problems and ran well, although I was playing through the single player game. An added bonus, I was able to play Mega Bomberman with a Super Nintendo controller since the controller ports on both sides of the console act as player 1 and player 2 controllers depending on which side you’re plugged into. Any controller plugged into the system will work with pretty much any game you throw at it. So if you want to play your Master System games on an NES controller, the RetroN 5 lets you do just that.

The control stick attempts to mimic the stick seen on Neo Geo AES controllers by giving a clicky stick that is supposed to provide tight control, but otherwise felt very loose, and the buttons were a little cumbersome due to their size and layout.

The console also comes packaged with a wireless controller which was actually kind of disappointing. What is nice is that it’s a bluetooth wireless controller, and you’re able to connect up to three more for four player games. On the back of the console is a dock that, while it does not charge the controller, can give you a place to put it when it’s not in use. There appeared to be some sort of issue with input lag, however it is possible that it was due to the television it was being played on. The control stick attempts to mimic the stick seen on Neo Geo AES controllers by giving a clicky stick that is supposed to provide tight control, but instead felt very loose, and the buttons were a little cumbersome due to their size and layout. There are also shoulder triggers as well as two additional face buttons on the top corners that can be mapped to any controller button or emulator feature you’d like including screenshots, saving states as well as accessing the emulator menu via the home button. Alternatively you can still make use of all original controller accessories as well as multitap adaptors for multiplayer games and map these macros on older controllers.

I had a limited experience with the audio and video filters due to the fact that I was playing the system at a convention with others waiting to check the system out, but it does also provide video filters that will cause the pixels to blend as well as put up scanlines on games to let people either make their games look more appealing visually or give the feeling of playing the game on an old CRT despite the console featuring HDMI video out. For someone like me who likes their games in their original, pixelated, low resolution presentation, the system provides this option very easily. You can even stretch the image from 4:3 to 16:9 if you’re crazy. Despite the loud convention happening all around me, the audio from the games running on the system sounded much more accurate without any issues of “Scratchy” or “Tinny” audio that plagued the previous RetroN consoles before the RetroN 5.

A save state can be generated at any point in any game, and can even save a state when you turn the game off, which then allows you to return to the game at the state you left it in previously.

The system also supports SD cards that provide benefits that you’d regularly see on an emulator which includes saving screenshots and fast forwarding. The device is also able to provide profiles that organizes content generated for any particular game. A save state can be generated at any point in any game, and can even save a state when you turn the game off, which then allows you to return to the game at the state you left it in previously. You’re also able to make use of “Game Genie” cheat codes and enable or disable them for each game. I was not able to verify if these profile features included video setups or controller mappings made specifically for whichever game is running. All of these functions can also be mapped to a button or macro on any controller connected to it.

Despite the system’s delayed release from last year due to faulty pins in the Famicom cartridge slot, Hyperkin is set to finally release the device in April with an MSRP of $99 and is able to provide firmware updates for even better emulation accuracy and features such as V-Sync in the future. The RetroN 5 may not be for the absolute Retro purist that wants 100% accuracy, but the device seems to be promising enough for people who just want to start playing their old games again for a system that has a fantastic amount of features, accuracy and compatibility at an attractive price point.