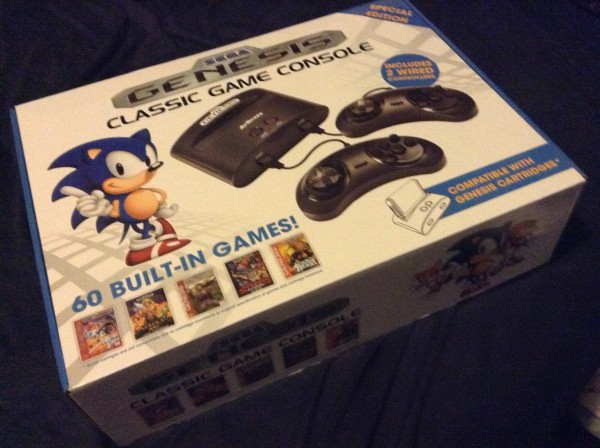 The old adage “You get what you pay for” tends to hold true more often than not. After all, if you’re in a Walgreens pharmacy you’re probably not looking to buy a video game console. But that doesn’t necessarily mean that the AtGames Sega Genesis is a poor quality console. At $30, it’s pretty tempting, but buyer beware there is some drawbacks to this system. Read on to find out if it’s worth your gas money for this cheaply produced retro console and find out how you can win it!

I bought this console for the sole purpose of giving it away to promote the latest episode of Sonic Talk. However, I still had to test the system out as I wouldn’t want one of our readers to have a faulty system plus, the tiny piece of tape holding it shut was so flimsy that it was already open before I purchased it. Not exactly off to a good start on the quality of this product. I brought it home and set it up. Sadly the video cables are pretty poor as it’s just a composite yellow cable with a white mono cable for sound. The plug is efficient enough with a fairly long cord and a red light to let you know it’s plugged in plus, there was no heat coming from the plug as well. The system itself is very light and I rather like the size. It’s very compact and fit perfectly on my computer desk between my laptop, Ouya and PS3.

The first problem I ran into instantly was the first controller. The system comes with two, but the first one seems to have all the button commands mapped to the C button. No other buttons worked. The second controller worked fine however, but was VERY loud and “clacky”. Every button press resonated in a loud “snap”! This got better as I broke the controller in. I returned the system, but since this one I already had was working, I just swapped out the controllers. Thankfully, after testing out the new controller, I can say it works just fine now. In fact, these six-button wired controllers actually make pretty good substitute Genesis controllers seeing as how they seem to be based off the same mold of the originals. The new controller I swapped out was definitely less “clacky” than the other working controller and I was surprised at how responsive it was. I put in an old copy of Street Fighter 2 while I was editing my Sonic Talk podcast and was able to beat the game using Ken. Every Hadoken, Shoryuken and hurricane kick worked without a hitch. This left me pretty impressed as cheap controllers like this usually don’t work that well. Also, if you don’t care for these controllers, you can plug in your old Genesis ones and they’ll work with it as well.

What doesn’t impress me is the list of games that come pre-built with the system. There’s a different, more expensive version of this system with wireless controllers and 80 games built in. 40 of them are original Sega Genesis games including Sonic 1-3, Ristar, and more. This $30 wired Genesis console only has 20 Sega games and 40 indy ones, only one of which is a Sonic game (Sonic Spinball) despite Sonic, Tails and Knuckles being plastered all over the box. Instead, it’s more of a brawlers box in which you get Streets of Rage 1 and 2, Golden Axe 1 and 3, Virtua Fighter 2, Shadow Dancer, Altered Beast and more.

Sadly the biggest problem with this console is the emulation itself. First off and most important is the sound quality. No, it’s not about being mono, it’s the fact that it sounds way off. Here’s a sample off of youtube. Anyone who’s played a lot of these Genesis games can tell the difference right away. You might not notice the difference with games you’ve never played before, but with games like Sonic 1, it’s noticeable right away. Poor Yuzo Koshiro’s Streets of Rage soundtracks are butchered with this emulation. Not only that, but the speed in which the games play seems to have been increased a tiny bit. It may be only by about 5-10 percent, but it’s noticeable. In some cases like Sonic Spinball, it works to its advantage as the game seems to feel better this way. It’s a minor nitpick at best though.

Poor Yuzo Koshiro’s Streets of Rage soundtracks are butchered with this emulation. Not only that, but the speed in which the games play seems to have been increased a tiny bit.

Also, while the system has no game save feature itself, most of these games are of the arcade style anyway and didn’t feature saves in back in the day. However, I’ve been hearing in other reviews of the 80 in 1 that it even affects the cartridges from saving. I don’t have my Genesis cartridges handy to test that out so I can’t confirm if that’s true on here. It should be noted as well that while the AtGames Genesis can play both Genesis and Mega Drive games, it’s not quite PAL compatible so don’t expect it to work with European Mega Drive games (there is a model out there with a switch that does however).

– Compact design makes it easy to fit in a small area.

– The Six Button controllers work well and have stood up to the Street Fighter test.

-The sound emulation is horrible.

-Composite only audio and video cables.

-Seems to speed up certain games.

-The buttons on the controllers are loud and snappy until you break them in.

-One controller didn’t work at all and had to be returned.

-20 really good Sega titles were taken out from the 80 in 1 package.

-Only one Sonic title despite Sonic and friends being plastered all over the box.

-No substitute for a real Genesis. 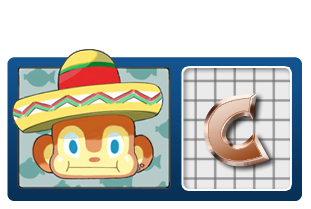 For 30 bones, AtGames Sega Genesis isn’t too bad to start with for a budding new retro gamer who wants to try some older titles. It’ll play most of your Genesis and Japanese Mega Drive games without a hitch and the wired controllers seem to respond well. However, this is NOT a quality console. It’s made cheaply and the emulation of the Genesis games (especially the sound) can be poor. Also, it shouldn’t have to be said, but you can’t hook up a 32X or Sega CD to this. AtGames is really for the casual consumer at best and it works out okay for that.

Well, if 30 bucks is too much for you guys, how about free? U.S.fans can listen to the latest Sonic Talk podcast tomorrow for a chance to win this Genesis console and a copy of SF2 Championship edition included! Just listen to our Sonic Genesis Talk with Aaron Webber tomorrow and be the fifth person in our Sonic Talk comments section with the right answer to our trivia question to win.