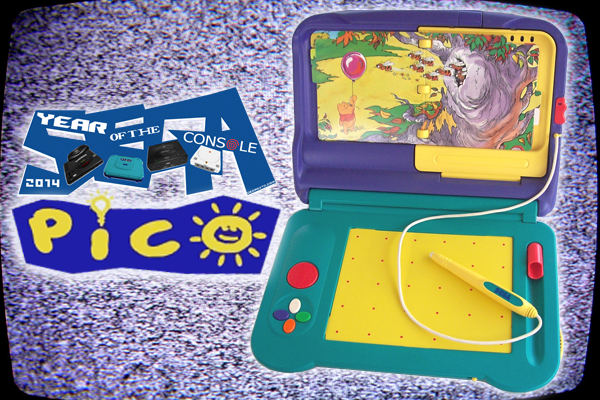 A Brief Tour of the Pico 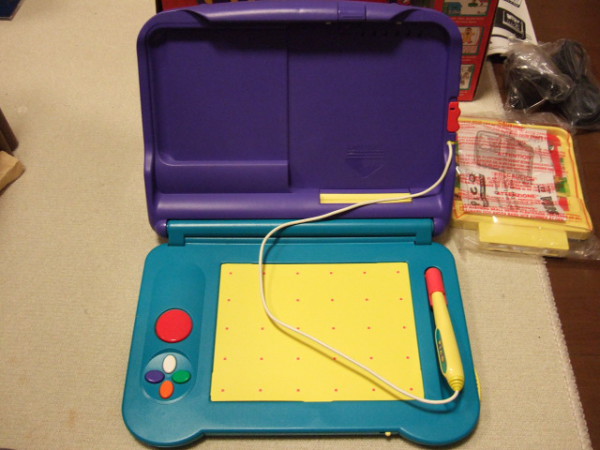 Dubbed “The Computer That Thinks It’s A Toy!”, the Pico really does resemble a children’s laptop. Featuring a fold out lid and a handle (8 years before the GameCube), the Pico is light enough for a child to carry about but sturdy enough that it can take a little abuse. A/V connections are simple, with RCA video with mono audio outputs and a kid-friendly recessed DC input. The Pico is opened by pressing a side button that releases the latch. It’s easy to open, which could be an issue if you’re carrying the Pico by the handle and accidentally hit the latch button which can send the Pico flying open. Thankfully, I’ve yet to have my Pico break on me the few times this has happened. Upon opening the Pico the proper way, Pico Storyware is inserted in the upper portion similar to putting a game into an NES, by inserting and locking the cartridge into place. Removing a cartridge is done by pressing on a latch along the top of the Storyware cartridge. Powering on is done so by moving a Genesis Model 1 like switch on the side. 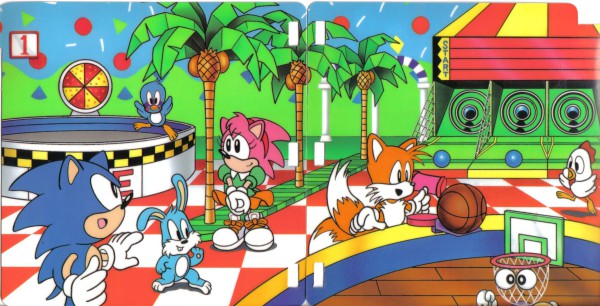 The Pico features a variety of control options. Users can use the stylus on the lower and upper portions of the Pico, on the stylus mat and the Storyware pages. Unlike a Wii U or DS, you do not have to press on the Pico to move your stylus, instead the Pico stylus functions more like a Wacom tablet allowing the user to hover the stylus to move cursors and characters and tapping on the pad or pages to select. The Pico also features a big red button which usually functions as an alternate way of selecting, and four multi-colored buttons that serve as directional buttons or additional selection buttons. The coolest feature of the Pico is the way in which the Storyware interacts with the TV screen. Like magic (okay, it’s actually simple technology), turning a Storyware page changes what users see on the TV screen. Since Pico experiences are book driven, Pico software is non-linear. Users can jump from the front page title screen to any page on the fly, making it perfect for younger kids who get frustrated when they get stuck in a traditional game.

Internally, the SEGA Pico shares much in common with the Genesis. The Pico uses a Motorola 68000 microprocessor, but lacks the Z80 microprocessor and YM2612 sound synthesizer, which means you wouldn’t be able to play a Genesis game on a Pico. However through a bit of Frankensteining, it is possible to get Pico cartridges to play on a Genesis/Mega Drive (though good luck controlling them). 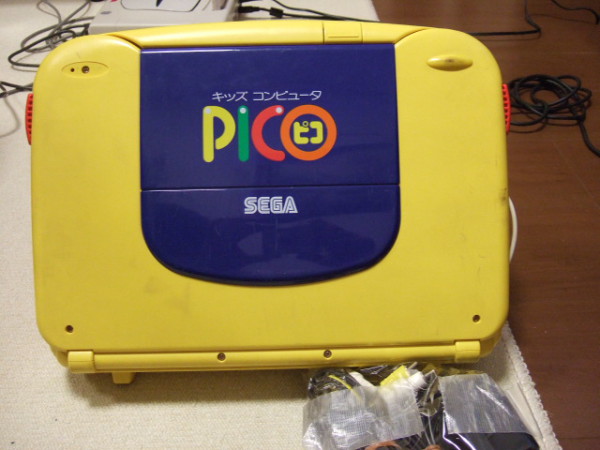 Following the success of the Genesis, SEGA turned their eye toward a younger market which resulted in the creation of the SEGA Pico. Like the Mega Drive, the Pico’s name comes from a metric prefix – while “Mega” denotes a factor of one million, “Pico” denotes one trillionth. Unlike the Mega Drive, SEGA was largely free of competition when it came to the Pico. If anything, they were venturing into a new frontier of hardware which wouldn’t seriously take off until years later with products like the LeapFrog and VTech.

Initially released in Japan, the Pico ended up becoming one of SEGA’s most successful consoles in the region with the hardware receiving support for over ten years, and a successor dubbed the Advanced Pico Beena was released in 2005 (and people say SEGA left the hardware market in 2001). Like other pieces of SEGA hardware, several models of the console exist including versions released by Yamaha, versions featuring licensed characters like 2004’s Pocket Monster model, and several regional variations. Suffice to say, if you were to become a Pico collector, you would have your work cut out for you.

In 2001 the pico brand changed from “Kids Computer Pico” to “Kids Communication Pico” which added internet support and put the console in the hands of SEGA’s Sega Toys branch. During the lifespan of the console in Japan, nearly 300 Storyware titles were released, a sizable number compared to America’s paltry total of 20.

In America, the Pico did not see the same levels of success as Japan. Releasing in 1994, the Pico was supported for only a few years until it was officially discontinued in early 1998 with the aforementioned library of only 20 titles. Despite not becoming a success in America, the console won critical acclaim from the industry and had an install base of 400,000 units by 1996. In 1999, the New Jersey based company Majesco struck a deal with SEGA to distribute the Pico at a reduced price of $49.99 (compared to the console’s original price of $160). Like Majesco’s Genesis 3, their Pico model was different from SEGA’s original. The Pico logo was now molded into the plastic, and the red stylus holder was changed to an unadjustable part of the case. These minor changes no doubt saved Majesco a small amount of money in production of the new model, and neither change affects the experience.

Should You Own a Pico?

If you play SEGA games for a challenge, stay away from the Pico. It’s not for you. But if you appreciate SEGA’s innovative hardware, a Pico is well worth owning. Given the Pico’s small US library, collecting a complete Pico library is easy – I currently own 12 of the 20 Storybook titles. Some Pico cartridges are rarer than others, but even a “rare” Pico game shouldn’t cost you more than $30 or $40. As mentioned in the hardware overview, the Pico features a lot of neat methods of navigating through software which makes it a unique piece of hardware to add to your SEGA collection. In part two of this Pico retrospective, I’ll focus on collecting further. In the meantime check out Episode 0 of SEGAbits Plays, embedded above, a new SEGAbits YouTube series in which we look back on SEGA games both obscure and classic and chat over them. I believe it is what the internet calls a “Let’s Play” video.

6 responses to “SEGA Retrospective: Over 20 years later, and the Pico is still an amazing piece of hardware”