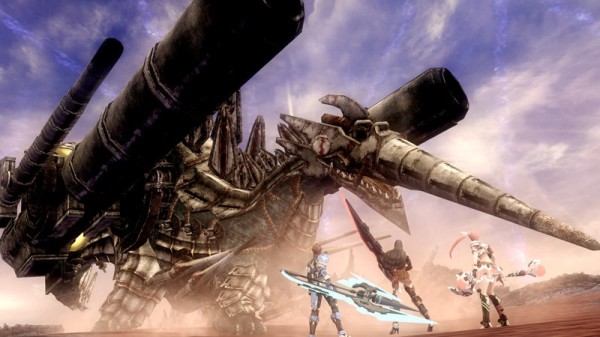 If you guys remembered that SEGA announced Phantasy Star Nova for the Playstation Vita back in September of last year. During the announcement we found out that tri-Ace (Resonance of Fate and Star Ocean) would be developing the game.  Not much information about Phantasy Star Nova has been release, till now.

It is confirmed that Phantasy Star Nova will take place in the same world as Phantasy Star Online 2 and have its own story. Characters in the game include Lutina (Maaya Uchida), Seil (Yoshitsugu Matsuoka), Izuna (Ai Kayano), Fordia (Miyuki Sawashiro).

The developers state that the game will be closer to Phantasy Star Online when you compare it to the atmosphere. ‘Survival’ is one of the visual concepts the team want to show in the game and there will be features such as costume destruction, which hasn’t been applied to a Phantasy Star game before.

The battle system is suppose to be completely different from Phantasy Star Online 2, so players that are new to the series won’t have to know much to jump in. When you start Phantasy Star Nova, the player won’t have facilities, but those are unlockable over time. How its unlocked is decided per player actions.

Like always there is going to be ad-hoc multiplayer, sadly no word for its online infastructure as of today. More details will be revealed during the ‘Phantasy Star festival’ that will take place June 15th.

Phantasy Star Nova is set to release sometime this year for the Playstation Vita in Japan. There are no plans to bring it over West.