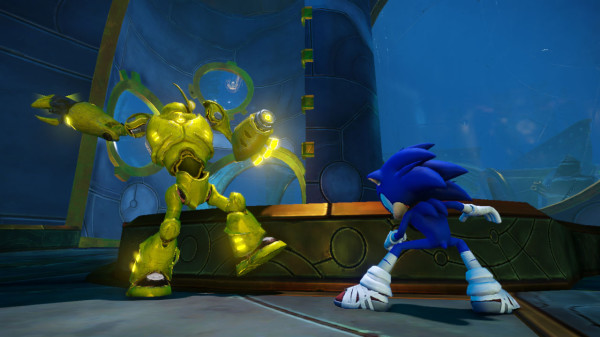 The brawling itself is pretty solid. Each character has their own moves and style: Knuckles is a heavy brawler and needs to get up close and personal with enemies, Sonic is a faster fighter with a heavy focus on kicks and his trademark spin dash attack, Amy’s fighting centers entirely around her hammer, which has average range and power, and Tails is a weaker long range fighter who can fire off bottle rockets, a more powerful charged projectile attack and suicide explosive robots. The attacks have a lot of weight to them and it’s pretty fun to mix light and heavy attacks, though for the most part fighting is very much about button mashing. There isn’t any timing for attacks and counters like you might find in an Arkham game, though the enerbeam goes a long way to helping mix things up. Occasionally you’ll encounter small enemies that can be thrown into other enemies or a sub boss, or shield-bearing enemies that have to be disarmed to attacked. This mechanic helped keep the fighting from getting too stale in the demo. 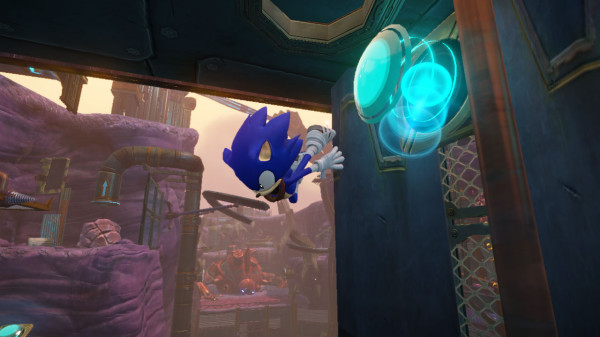 None of the characters move with any particular speed in these areas; even Sonic doesn’t really move all that much faster than your typical platforming character outside of the on-rails speed sections.  That isn’t to say elements of what the characters were known for aren’t present though. Sonic can blast around stages with the spin dash, which he can use to not only quickly close with enemies but also blast up ramps to reach other areas. Amy can access side scrolling platforming areas with her balance beam ability. In these areas, Amy’s movement can be a little stiff.

The demo didn’t give Knuckles or Tails much time to strut their stuff, but the way they move has been given a considerable overhaul. Tails is now a mostly tech focused character, with even his trademark flight ability being gimped considerably compared to past games. Here, Tails doesn’t really fly so much as jump into the air and float back down. Knuckles has been taken even further: he can no longer glide, though he can still dig and climb on certain surfaces.  This overhauled movement is complimented by stages designed to be more like Ratchet and Clank stages than Sonic stages. 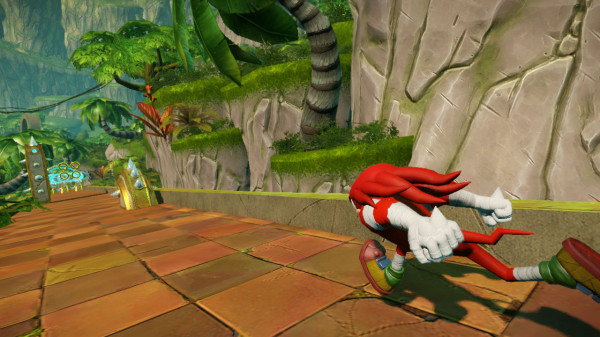 The stages have a fairly simple formula: jump to an area, beat up enemies, solve switch puzzle to advance, then repeat. Though I didn’t get a chance to see it for myself in the demo, there are apparently points where different characters can can take different paths through a stage. I never had to climb with Knuckles while I was in the first stage, since I stuck with Sonic most of the time. The design of these brawling stages is nothing like the rollercoaster you might expect from a Sonic game, providing a much slower, more plodding and very combat driven experience. That said, there are plenty of events to break things up, especially in the second demo stage. In addition to the aforementioned balance beam segments with Amy, the stages are also punctuated with sub bosses. The first boss pretty much just exists for Sonic and Knuckles to have some funny banter and to teach the grappling mechanic in combat. The second boss is encountered early on in the second stage with a cool on-rails chase sequence and must be defeated later on with the enerbeam.

The enerbeam plays a pivotal role in every boss fight in the demo. For the bosses of the first two stages, combat is focused entirely on using the enerbeam to toss enemies at the boss’s weak points. In the first stage your main goal is to damage a giant robot’s drill, while in another you’re trying to knock the boss off balance and into a pit of acid. The final boss fight with Eggman is easily the coolest. He fills the screen with dozens of missiles at a time while common enemies try to sucker punch you. Fortunately, the missiles malfunction and just fall to the ground, giving you the ammunition you need to take Eggman down. Using the enerbeam, you throw the missiles back at Eggman. You’ve got to hit him a lot before he’s finally stunned. From there, you need to use the enerbeam again to pull him down to the ground and hit him directly. You need to do this several times to take him down, and to keep you on your toes Eggman attacks more ferociously every time he takes on damage. This boss battle took a little while and it was easily one of the longest boss battles I’ve ever played in a Sonic game. 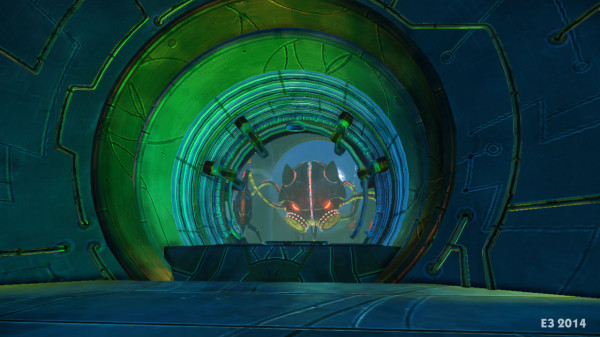 Speaking of length, that is another element that separates the game from other Sonic titles. It must have taken me about forty minutes to beat this demo, which is part of the reason why this preview didn’t go up sooner. Of those forty minutes, at least 24 were spent in the game’s two lengthy action stages. What’s more, this demo did not even contain any complete levels, as every section in the demo ended in the middle of a cutscene. As I said earlier, these stages will be a mix of brawling and speedy platforming areas, yet none of the latter were present in the demo. Sonic Boom could very well feature stages that run longer than fifteen minutes, making for some of the longest Sonic stages since Heroes.

The last area I played was the speed section, which at the moment is the only speedy section SEGA has shown. It’s a fun little course to run through that doesn’t really offer anything interesting…but it’s not really supposed to, because it’s actually nothing more than a brief section between areas in the actual game. Given the context of the stage, I’m looking forward to playing a speed area that’s part of an actual stage, because it was fun and plays well, even if it is too easy and empty. There was also an awkward moment where I decided to switch characters and suddenly found myself further back in the track, which was a little jarring. 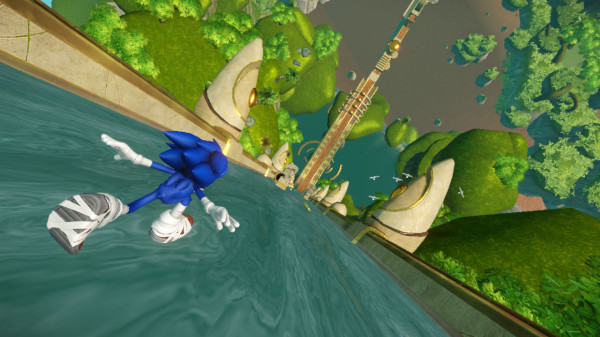 Yes, you can switch between characters on the fly. For the most part this mechanic works well, allowing you to instantly switch between whichever character’s available to you in a level for different scenarios. The only downside to the way this game handles is that you are immediately transferred into whatever danger the AI character was in, and you often won’t have time to react to it. You can’t just switch between characters willy-nilly like you can in Sonic Heroes, you need to wait for a lull in the fight to avoid unneeded damage.

In order to accommodate all these changes to the formula, some other notable sacred cows of the Sonic franchise had to be killed, but these are ones I don’t think anyone will miss. Lives are finally gone, which should be a godsend given how long these stages are. Traditional checkpoint posts are also gone, with the game instead just starting you off at certain points when you die. Rings now act as a life bar, with enemy attacks usually only chipping at your cache of rings rather than causing you to lose all of them at once. The game starts you off with a cap of about one hundred rings, but this cap can be raised later on. These changes were very welcomed in the demo, complimenting this new, more combat centric Sonic game quite well. 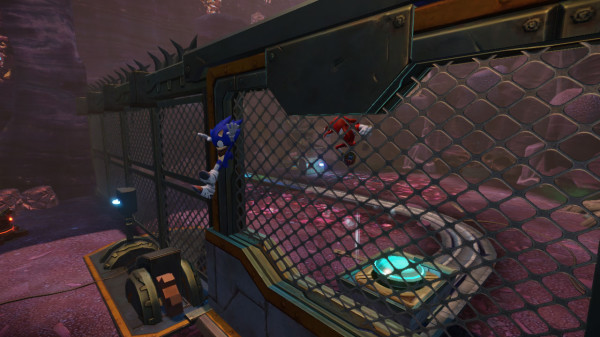 Finally, I have to say that I’m really loving this game’s production values. I’m used to the cutscenes and dialogue in a Sonic game being at least a little painful, but here I was laughing and smiling throughout (almost) the entire experience. From the banter between Sonic and Knuckles to Eggman’s lines, this game has a LOT of personality and all of the actors deliver their lines with more talent than I’ve ever seen in a Sonic game before. Even Cindy Robinson, the voice of Amy Rose, has ditched her awkward Minnie Mouse impression for a voice that not only sounds a lot nicer, but also sounds a lot more like Amy. This is perhaps the first Sonic game that’s been released since I became an adult that has a storyline I’m actually kind of looking forward to. I daresay this even made my time with the demo better.  Unfortunately the graphics don’t quite measure up to the writing and voice acting, as the game itself looks decidedly average, though it does run well for the most part. I only caught a few instances of frame rate stutter which happened when the action got particularly intense. 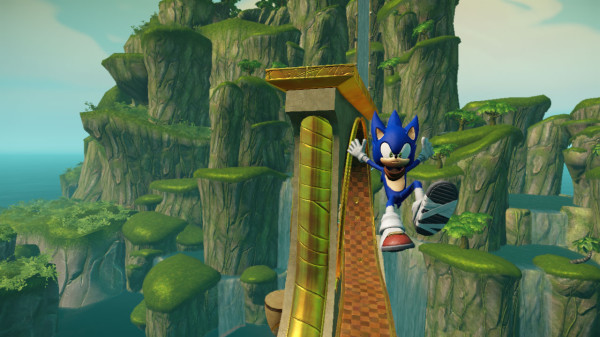 I had fun with Sonic Boom. I’ve had some reservations about the title, but after playing the game learning about the context of these stages, I’m beginning to have confidence that I will have fun with the final product. In the end, the quality of this game will rely heavily on how the various parts come together. Will the speed sections be well designed, and entertaining enough to compliment the combat stages and make this feel more like a Sonic game? I don’t know yet. Will the brawling remain fresh throughout the entire experience? I didn’t grow tired of it during my forty minutes with the demo, but I can’t answer that yet either. I am a little disappointed by just how much of a departure it is from the Sonic I know and love, but I’m also really beginning to look forward to exploring this new world that has been created for this character, and to experience a different type of Sonic game made from the perspective of an American company. Still, going by what I played, I do advise Sonic fans to come into this game not really expecting a Sonic game. Going by the E3 demo, it’s pretty much just a fun brawler.

6 responses to “SEGAbits at E3 Preview: Sonic Boom: Rise of Lyric (Wii U)”