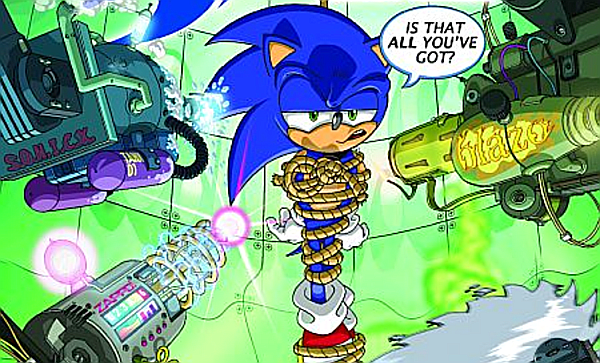 The Sonic franchise has an image problem. It remains disrespected, discredited, and broadly misunderstood for years, not because his titles are consistently good, but rather because the good titles are often swept away and ignored in favor of snark towards past failures.  In this sense, games writers might as well joke about airline food or women drivers.  I’m not a marketing wizard, nor do I claim to have all the answers, but I do think it is important to highlight what the problems are and are not.  At the very least, the culture could stand to be snarky and dismissive about something that happened six months ago instead of six years.

(I’m ignoring Sonic & the Black Knight here, as nobody outside of the most dedicated Sonic fans touched that game.)

I’d like to make this perfectly and entirely clear so that there is no confusion:
Sonic’s friends are not, never were, and never will be the problem with Sonic games.  If you take issue with writing, fine. That’s a writing issue.  If you take issue with how they play, okay. That’s a gameplay issue. But there’s nothing innately wrong with Tails, Knuckles, Amy, Shadow, Silver, Big, Cream, or any other character. It is how they are used.

Sonic story went through a number of phases, from non-existent to upbeat with grim undertones, to bizarrely grim, to Saturday morning cartoon, but the point where it shifted away from non-existent was Sonic Adventure, a game that seems to have a decent story premise, but abysmal execution.  It, and many of its successors, ask you to take this menagerie of cartoon animals seriously, but without the subtlety and charm to back it up.  At the same time, the game structure was redefined to have you play as all these new and returning characters in very diverse, though ultimately unrefined ways.  In effect, it is not the characters that held the game back, but the core design philosophies that were needlessly attached to them, hampered by the realities of time, budget, and technology.  It’s like Jessica Rabbit said, they’re not bad. They were just programmed that way.

Since then, Sega has definitely dialed back. Of the last ten Sonic platformers released to consoles and dedicated handhelds, none have introduced new playable characters to the franchise and seven of them only allow you to play as Sonic in the single player (ignoring the duality of classic/modern in Generations and regular/werehog in Unleashed).  In the remaining three, the side characters played very similarly to Sonic himself. And to clarify, yes, there have been ten Sonic platformers between now and Sonic ’06.

You’ll notice above that I only reference two to three games here where that sentiment refers, yet the Sonic Cycle is one of the most heavily cited memes when any games writer talks about Sonic.  For something so widely accepted, it sure has a low hit radius.

For the two of you out there who aren’t familiar, the concept of the “Sonic Cycle” is simple: in Sega’s early reveals of a new Sonic game, they highlight familiar, very old-school styles of play that appeal to those who enjoy his classic sidescrolling exploits.  People get excited.  As the marketing train continues, Sega reveals that game contains diverging gameplay styles and new characters. This excitement turns to skepticism.  Upon final release, the new gameplay elements are pervasive and unpolished, bogging down the whole experience.  The game does not live up to the original standards expected of it, and people are disappointed.  Then, when the next Sonic game is initially revealed, the emotional roller coaster repeats.

The Sonic Cycle first gained popularity around the release of Sonic Unleashed.  In spite of poor pacing, arbitrary roadblocks, and pointless quick time events, what most people took away from that game was the werehog, the hulking brawler platformer gameplay with a character designed to appeal to a younger audience.  It lived on through the next major release, Sonic 4 Episode 1, though I’m willing to call the reception to that game mixed.  But since then, where has it honestly been applicable?  Recall, the Sonic Cycle is characterized by three qualities: initial excitement, undesirable reveals, and eventual disappointment.

Sonic Colors made no attempts to grab nostalgia, and never seemed to get overwhelming press buzz before or after its release.  It introduced the Wisp mechanic, short transformations for Sonic that levels were designed around utilizing.  Response was generally fairly positive, and most serious criticism lies with level design.  The Sonic Cycle does not apply here.

Like Sonic 4 Episode 1, Sonic Generations is a complete nostalgia grab and went on a full marketing campaign as such, not really advertising or delivering on any sort of gameplay twist.  The level themes don’t live up to their potential diversity, and the final boss is absurdly bad, but critical reception was consistently positive.  Nope, doesn’t apply here either.

Sonic 4 Episode 2 improved parts of the original, but was met with harsher reviews.  This would possibly help it apply here, but Episode 2 was almost entirely out of the game zeitgeist through its entire development that there just wasn’t any sort of excitement for that game at all.  There’s an argument that could be made, but I’m going to say, no, no Sonic Cycle here.

Sonic Lost World, I’m going to say the same thing as Sonic 4 Episode 2.  The responses were mixed enough to allow some wiggle room for argument, but as that game stands, nobody but Sonic fans cared about it before or after.

And of course, as an honorable but tangential mention, pretty positive response to both of Sumo Digital’s All-Stars Racing games.

So, in this case, it’s hard to say that the Sonic Cycle still has any purpose.  Sonic games still receive mixed reception, though it definitely trends more on the positive side; however, unless Sega is specifically playing the nostalgia card, nobody in the games media seems to care.

Funny enough, the people complaining about the Sonic Boom character redesign would also be the people who would completely ignore if it retained the current look in a new CG cartoon series.  Crazy how the status quo doesn’t matter until something goes awry, isn’t it?

Problem: Sonic Needs to Die
Last time it was relevant: Pretty much Shadow the Hedgehog onward.
Where this sentiment typically refers: Whatever the latest Sonic game is.

You see this kind of editorial pop up from time to time, 10 game characters that need to die or series that need to end.  This is a flawed premise.  Often, it is the author trying to preserve some past memory or image of a franchise, and trust me, there is no series people cling to the past for more than Sonic.  While it is true that seeing another middling sequel on shelves might cause you to roll your eyes, but these franchises continue to exist for a reason, they still sell, and they sell because enough people like them to allow their continued existence.  Broadly speaking, people still like Sonic, or want to like Sonic, or still have some sort of leftover affinity for Sonic.  If that suddenly ended, it wouldn’t benefit Sega.  Sonic still makes money for them.  It wouldn’t benefit the people that still like and buy those games.  Continuing the series wouldn’t hurt the person writing the article.

The only situation where this argument makes some sense is when continuing a franchise diverts costs away from other projects.  In theory, Iizuka and Sonic Team could be working on Shenmue 3 right now (yes, I know that it wouldn’t be their team, nor is that remotely sane), but a hiatus and a death are two very different things.  If not for my love of discussing Sonic as a hobby, I would love to see the franchise take a break and reassess some of its design choices while focusing on an unrelated game.

Sonic should not “die,” because he’s a minor nuisance to a select, vocal few.  Even in the face of criticism, he remains a firm video game icon that has seen ups and downs.  If he “dies,” then he can only exist as a memory in the minds of aging players.  Yet if he continues, there is always the chance, however slim, that he regains his footing as he did in Colors and Generations, and keep pace as we expect him to.

As I said at the beginning of this editorial, there is no clear solution to this culture of negativity towards Sonic.  For a company like Sega in its current state, the cost and complexity of making a game as polished as Generations consistently is extremely difficult, and further playing up the nostalgia angle doesn’t do much to help the series move forward.  In some ways, Sonic Boom represents a sort of side-step reboot and an attempt to gain ground in fresher markets that haven’t yet formed cynicism about the franchise.  It is definitely a strategy with a lot of potential and all the same potential pitfalls.  As fans, players, watchers, and critics, unless we are clear about what the problems actually are in the face of easy scapegoats, the series cannot even hope to regain the traction and respect it once held.

16 responses to “Editorial: False Positive: Sonic, the Media, and Wrongly Diagnosing the Problem”