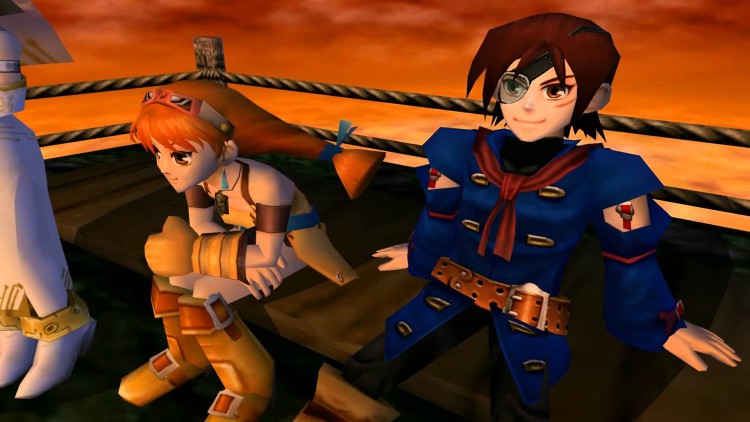 This is probably one of the scenes that I most vividly recall about the game, where Vyse, Akia and Fina are just staring into the beautiful sunset.

At this moment the game explores the character of Vyse as this outgoing kid that is searching for adventure, searching for whats on the other side of that sky. He talks about all the rumors and other dangers that people use to scare kids like him from leaving the island, the whole time he talks about it with a smile on his face. That’s when I knew that I liked Vyse as a lead character, he wasn’t some whiny little emo kid, a stereotype lead character that most popular RPGs at the time used. He was just a kid that wanted to be a pirate and who the hell doesn’t want to be a pirate? 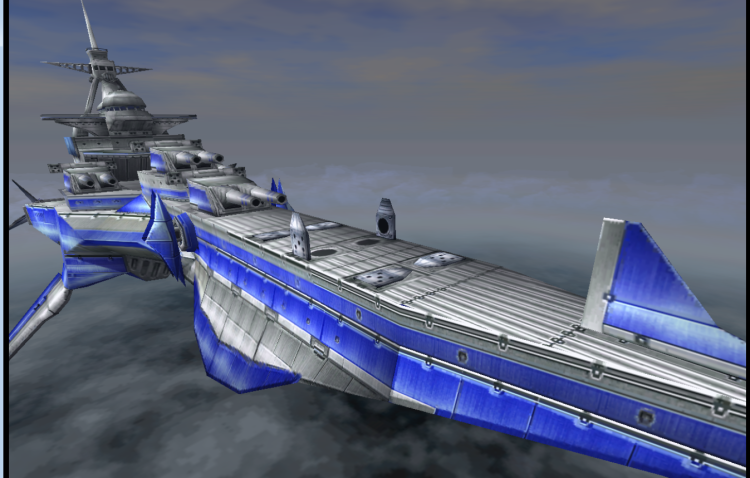 At first when I found out that I was going to trade my first ship, The Little Jack for the Delphinus I was a little bummed. Sure, its just a ship in a game, but I loved The Little Jack, it was the my first ship and I spent hours exploring and getting into annoying random battles.

But The Little Jack was a ship intended for fishing, which was modified, while the Delphinus was a legendary war ship built for the Prince of Valua, Enrique. Thankfully for the crew, Enrique leaves Valua and joins your party as a Blue Rogue and helps you on your journey to find the Moon Crystals. Not only is the Delphinus a huge upgrade to your party, but also a big lost to the enemy, who wanted to mass produce the ship. 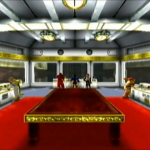 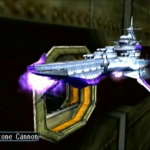 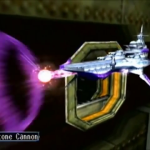 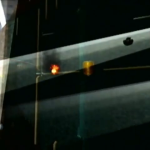 Its moon stone canon is so powerful it made a whole through The Grand Fortress, which is suppose to be some heavy duty shit, like it was nothing. NOW DATS SOME POWAAAA!!!!

After your ship, the Little Jack gets destroyed our hero Vyse finds himself shipwrecked on a island, after two weeks he gets rescued. After you get your Delphinus ship, Vyse goes back to the island and makes it his base. Not only that, if you have the right crew members you will be able to build and decorate the island and upgrade your ship, if you have the right about of gold.

It was just something about doing this that I really liked, I always wanted to have my own island and now I was a pirate, had a badass war ship with a zany crew and I had my own Island? Man, this game couldn’t get any better. 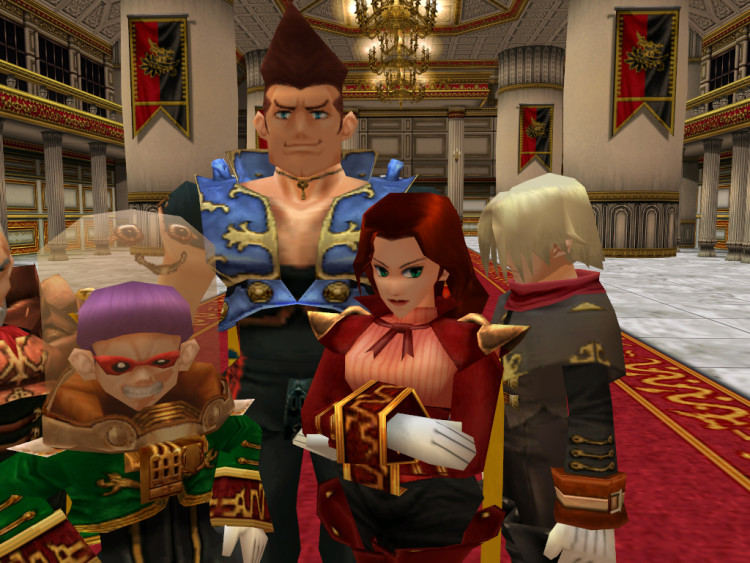 I always thought Belleza was a complicated character, sure she is with the bad guys at first and uses Vyse with her charming looks to trick him into getting her a Moon Stone. I think the reason I liked her so much is because she reminds me of Akia .. Just like Aika she was a orphan after her father died in War and after her mother died of a ‘broken heart’. Yeah, I’m pretty sure George Lucas wrote that last bit…

As a character she is outstanding, she hates war and doesn’t believe in using brute force. She is the Fourth Admiral in the Valuan Armada and mostly serves as one of the game’s excellent villians… sorta.

In the end her superior, Galcian decides that the Valuran army should serve him and his needs, not the people they swore to protect. This crushes Belleza who actually loves that bastard old man, so during the last moment in the game after he is escaping… she comes out of a nowhere and does what every sane lover would do, she suicide bombs him because she loves him (and he murdered a bunch of people, but who is counting?). 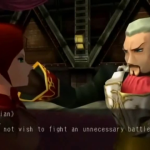 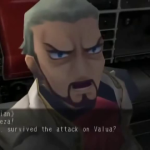 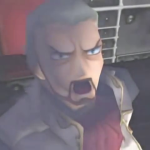 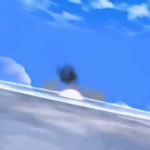 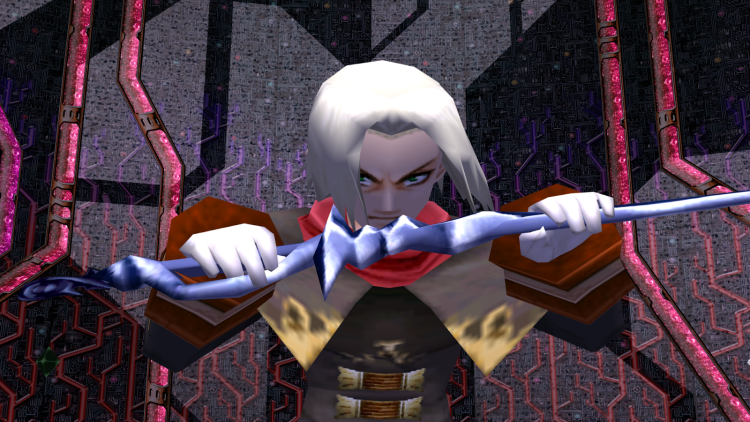 Ramirez is a interesting rival to Vyse, not only was he Fina’s friend while she grew up, he actually had some stuff in common with our hero. Much like Vyse, Ramirez loved looking at maps, but unlike Vyse who saw the maps as places to explore; Ramirez thought it made the world look smaller. I guess you could sort of describe Ramirez as Shadow the Hedgehog and Vyse as Sonic the Hedgehog. They even have the color schemes going for each other.

In the start of the game, Fina is sent out to find the Moon Crystals because a decade before they sent out Ramirez to get them. We later find out that he joined the Valuan empire and is now Vice Captain to Lord Galcian. Yep, that same old fart hat Belleza wants to bone. And yes, Ramirez is also obssessed with him. Before you actually fight Ramirez, you have two minor conflicts with him, both which you can’t win. They establish that Ramirez is one tough cookie, you would later find out at the end of the game that they weren’t joking when they hyped him up. 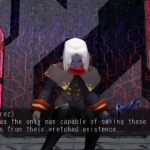 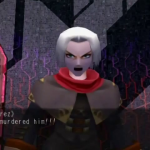 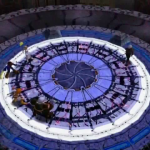 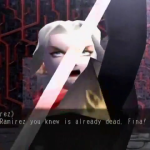 After Lord Galcian dies, Ramirez is pretty pissed off; you basically killed his hero and Captain. The dude goes off on our heroes and you guys fight. He does his Lunar Blessings, you bust up some cutless fury. Bam. Its over? Nope. 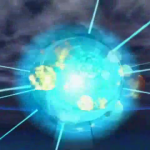 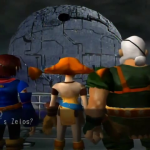 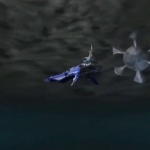 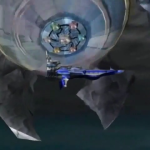 So what does Ramirez do after he get’s his pale white ass handed to him? He sacrifices his life to awaken Zelos , a powerful ass construct of mass destruction. After a super long ship battle with this thing, you finally take off its claw/leg things… its all over.

…. WRONG. This isn’t even his final form! 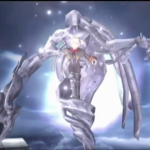 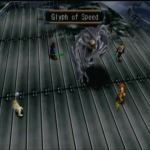 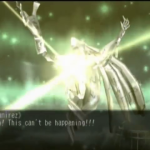 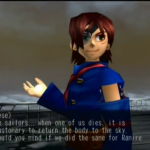 That’s right, Ramirez is fused with this machine thing and he isn’t happy. You’d think he would be more excited about being part machine. After another fight with, this time in his final form, you finally beat the game. Ramirez is reduced to a glowing speck of whatever the hell that is and you give him a proper burial. You throw him overboard your ship. Happy ending for everyone (that is a main character of our crew).

4 responses to “The SEGA Five: Favorite Moments in Skies of Arcadia”