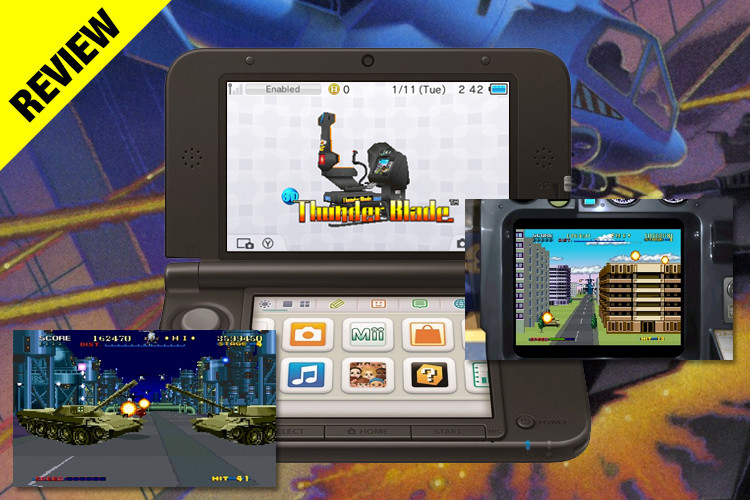 Designed for the Sega X Board hardware, Thunder Blade puts players in the pilot seat of a helicopter which is equipped with both machine guns and a missile launcher. The goal of the game is simple, destroy various enemy vehicles, survive the end of stage boss and move on to the next stage. While the game sounds like After Burner with a helicopter, Thunder Blade stands out with differing view changes and ingenious sprite scaling techniques. The game starts off as a top down shooter, with the player controlling their height, and then switches to a forward facing perspective. This changing perspective may read like a gimmick, but really it allows the game to offer up two modes of play, and coupled with sprite scaling the game offers up a true sense of depth both vertically and horizontally making it one of the most immersive SEGA arcade titles of the time. Like many 80s SEGA arcade releases, Thunder Blade not only sported hectic arcade gameplay and lovely graphics, but also featured a deluxe sit down machine with special controls. While a more traditional upright machine exists with a flight stick, the deluxe Thunder Blade is truly a great arcade experience. Using your feet to move the left and right which in turn shifts the screen and your body and a flight stick with allows for aiming and an up and down movement, the deluxe Thunder Blade machine is an incredible experience and is a must play for any SEGA fan (I found one at Galloping Ghost Arcade in Brookfield, IL). 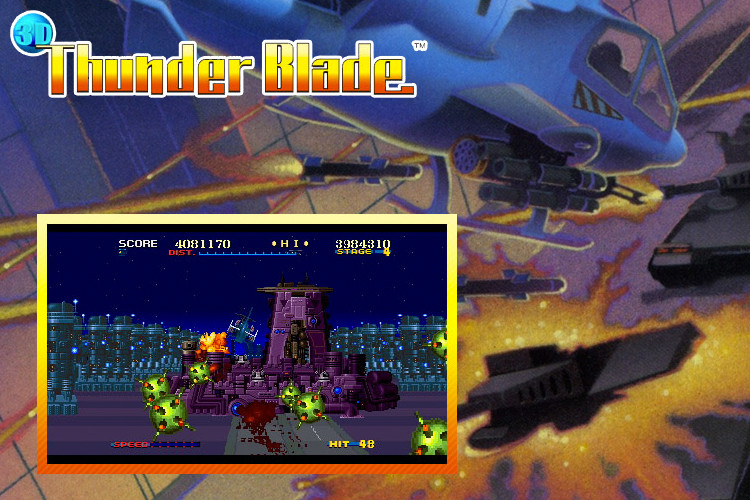 Since its release to arcades, Thunder Blade has seen several home console versions including releases to the Amiga, Amstrad CPC, Atari ST, Commodore 64, DOS, MSX, Sega Master System, Sharp X68000, TurboGrafx-16, ZX Spectrum and on the Genesis/Mega Drive as Super Thunder Blade. Yet despite all these releases, none truly matched the arcade original. Scaling effects were often absent and some versions cut out the overhead perspective entirely. So it delights me to say that the 2015 release of 3D Thunder Blade from SEGA and developer M2 is the first commercial release to truly bring home the arcade original. Having played the deluxe arcade version for myself, I can easily say that M2 have done everything they can and more to bring home Thunder Blade.

While every SEGA 3D Classic has utilized the 3DS’s 3D capabilities well, 3D Thunder Blade is the first 3D Classics title that truly calls for the effect. The game’s overhead mode in 3D offers a whole new dimension of play, with the distance between the player’s helicopter and the ground playing a key role in evading enemy fire and deciding which weapons to use. The head-on perspective, meanwhile, is just as good as any other 3D Classic title, and because Thunder Blade was one of SEGA’s later super scaler titles the effect is more impressive than seen in 3D Out Run and 3D Space Harrier. 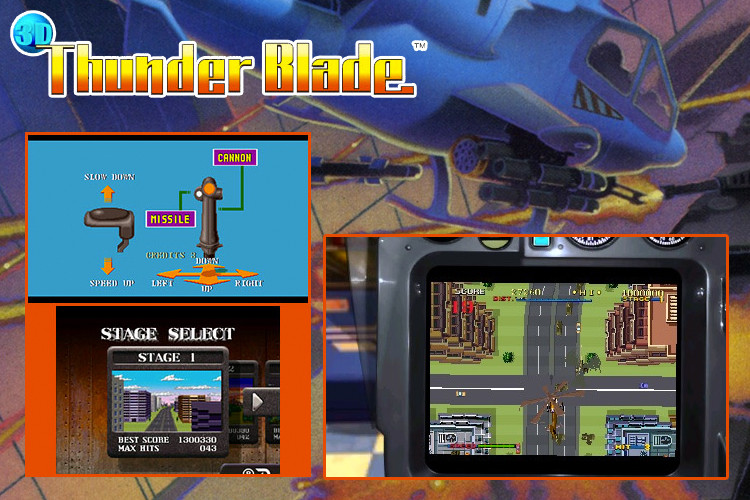 Controls are simple once you get used to them, and SEGA Localization Producer Sam Mullen will be happy to learn that I read the game’s digital manual to fully understand how to maneuver through the game. Like other SEGA 3D Classic arcade releases, you have several options for controls and will likely find one that perfectly suits your tastes. I opted for controlling the helicopter with the left thumb stick, firing with the buttons, and adjusting my speed with the triggers. The game also can map speed to the C-stick, something I’m unable to do on my old 3DS XL, but I’d assume that that would be the ideal control scheme. 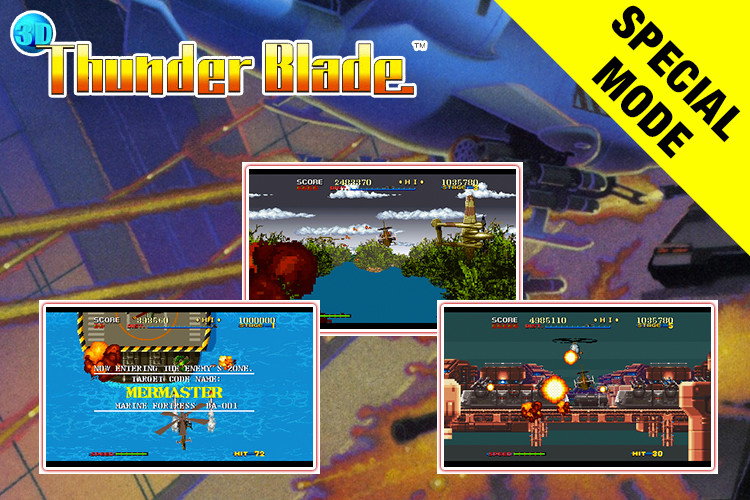 The original Thunder Blade is on the short side, with only four stages, however given the arcade version’s difficulty it feels like a much longer experience. However, with 3D Thunder Blade offering up various difficulty modes and more continues, players can easily breeze through the game in 15 minutes at the easiest settings. M2 were likely aware of this, as beating the original game unlocks a special mode which brings several changes to the original game, in essence adding four additional stages to the game. In “Special Mode” your helicopter is a different color, weapons are enhanced, enemy and obstacle patterns are new, bosses now have special introduction graphics and the mode adds a new end boss.

Also present in this release are the modes we’ve come to expect from SEGA 3D Classic arcade titles including save functions, replay saving, touch screen and gyroscopic control options, difficulty settings, and several screen and display options including a standard full screen view and a recreation of the deluxe arcade version that I’ve been gushing about.

3D Thunder Blade may be one of the lighter 3D Classic titles in terms of game length and content, however the game itself is a true SEGA classic that never got the love it deserved due in large part to the lack of an arcade-perfect home release. As such, 3D Thunder Blade is the long-awaited arcade-perfect home release fans have been waiting for and is a must own title regardless of length.

“Despite the short length and similarity to other SEGA 3D Classics titles, this is a must own game for SEGA arcade fans”

This is an advance review, 3D Thunder Blade releases this Thursday to Nintendo’s 3DS eShop!