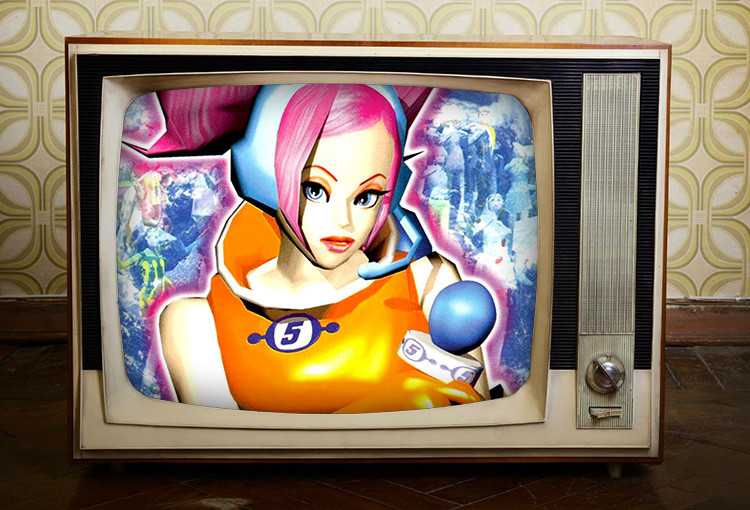 Despite being a part of the same campaign, there are a few differences from the other ads in the Space Channel 5 commercial. There is no zoom into the orange triangle, and you won’t see any other other levels. The change was likely to make the reveal that it was all happening inside the Dreamcast more of a surprise. Also, you can try as hard as you want scanning the crowd scenes, but the cast of this ad is strictly Space Channel 5. Still, there are several notable characters from the game scattered about Club Venus, including in-game bosses and Pudding and Jaguar sharing a table together as they watch Ulala put on a show. The Morolian leader Hoorg, who speaks english here unlike the usual Morolian babble heard in the games, exclaims “Chicks dig the rump shakin’!” to which Dirty Dancebot Morolina (who turns out is a dude) sheepishly warns them that Ulala is their natural enemy. I guess Morolina is the only one sticking to the game’s script. Hoorg ignores the warning, taking the stage and saying to Ulala “Hey baby, come to papa!” to which Ulala casually responds by shooting him and saying “Bad dancing, it’s a killer!”.

While the commercial only shows off a few seconds of gameplay, it’s a lot of fun seeing all the characters together and hearing a bit of the game’s theme song Mexican Flyer. While I tend to give commercials flack for skimping on gameplay footage, in the case of Space Channel 5‘s ad I’ll gladly give it a pass an an enthusiastic thumbs up for being a great showcase of the game’s characters, style, and attitude. Watch the ad for yourself and tell us what you think! Do you remember seeing this one when it was on TV?