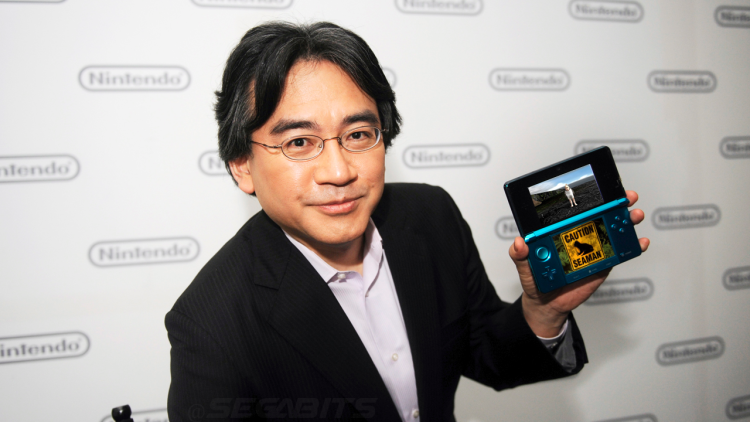 I heard the tragic news about the passing of Nintendo’s president, Iwata-san… I can’t believe he’s gone.

I first met Iwata-san back in 1996, so it was a time before you would typically see him in a suit. It was at HAL in Kofu. I remember that he always carried around a Mac (PowerBook), which was quite rare in the games industry. I think that formed a bit of connection between us—a feeling that we shared the same interests. It was around the year after that when I saw him with a G3 PowerBook, which even I had hesitated to buy, and I remember thinking, “this guy really loves Macs.”

It wasn’t until a bit later that I got a chance to work with him. It was around the time when Seaman was taking the world by storm and I was really busy working on planning for the sequel and taking interviews and such.

Iwata-san got in touch and asked if we could meet, and he even came all the way out to the apartment I was renting in Tokyo to see me.

As anyone who has met him probably understands, Iwata-san always has this aura about him that makes you feel happy and at ease. When you’re around him, you just feel good, even if you’re talking about work. That day, Iwata-san wasn’t in his typical casual garb, but had donned a blazer that he didn’t look quite comfortable in. He handed me his business card and awkwardly said, “this is what I’m up to these days.” I looked at the card and he had a title that named him as part of the Office of the President. He said that he had distanced himself from HAL (the company at which he got his start in the games industry) and was now helping out at Nintendo (HAL was under the umbrella of Nintendo).

“I’ve been given a special assignment to go out and get new types of games that haven’t been on Nintendo platforms before.” That’s the reason Iwata-san gave me for why he wanted to meet that day. He told me that Seaman was the kind of thing he was looking for. Thinking about it now, his role at this time was probably given to him as preparation for taking over management of Nintendo down the road, but it didn’t look like that was on his mind at all at the time.

To use a games industry expression, Seaman was a bit of a “guerilla-like” project even from the beginning, and no one, including myself, thought it would be a big hit, but I got a lot of good advice from Nintendo’s Miyamoto-san (and Tezuka-san), so I would show them the project even in the early planning stages and they would always look really intrigued by it. Before Seaman’s development on the Dreamcast began, I actually periodically had talks with Nintendo about making it for their platform. I think that background contributed to Iwata-san’s taking an interest in it. The game launched and did better than anyone could have imagined, constantly being sold out in stores. As a result, I got hit with the spotlight and received a lot of publicity. Iwata-san probably saw that and figured it would be a good idea to make friends with a game creator who could create weird games like Seaman.

The DS and StreetPass
After that, I got the opportunity to do a lot of “experiments” with Nintendo. Most of them didn’t result in much, but we made a lot of prototypes of weird stuff. We even did things like make StreetPass-like technology on the GameBoy (not DS). I remember talking about things like, “Say you’re back in middle school. There’s a girl in your school whose name you don’t know. You always take the same train to school together. Can’t we come up with some good way to ask her out?”

This picture of Iwata-san is from that time (the board plugged in there is running a prototype program that we were working on).

When both the Nintendo DS and Wii were to be released, it was Iwata-san who made sure to quickly get in touch with me and demo the machines for me himself. He would always earnestly ask, “What kind of game would you make on this, Saito-san?” Iwata-san was always very courteous to everyone, and while he was a creator himself, he would never forget to show a great deal of respect to other creators.

When the DS came out, I went to Nintendo to receive a presentation for developers about the device. The developer support guy doing the presentation said, “That’s just about everything. Do you have any questions?” I asked him what he meant by “just about.” He replied, “There is one more new feature, but Iwata-san wanted to present that to you directly, so please wait here a moment.” I waited a bit and Iwata-san came down from the president’s office and tells me, “Saito-san, remember that StreetPass (it didn’t have this name at the time) feature we were working on? Well, it’s been implemented into the DS!” He then happily demonstrated the feature to me. This kind of thing isn’t something that most people get to experience. I consider myself extremely lucky to have been in the games industry at just the right time and to have had Iwata-san provide me with such an experience.

The Wii Controller
There’s a bit on the Wiki that says I was the one to suggest putting a speaker on the controller after it was first announced. That’s more or less true. Iwata-san, Miyamoto-san, and I were out at some yakiniku restaurant in Kyoto when I mentioned it. What is so incredible about this to me is that Iwata-san and Miyamoto-san went back and changed the design after my suggestion, even though they had already showed it off to the press, mockups included, and there had almost certainly been other people at Nintendo who internally proposed adding speakers to the controller before. I wasn’t even part of some big games publisher or anything—I was just an outsider with a big mouth.

This led into another really interesting story, but I’ll save that for another time.

Seaman on the 3DS
When Iwata-san came to ask me to create Seaman for the 3DS, I like to think he was in the same frame of mind as when he first came to visit me at my apartment back in 1999. I did start working on the project, but things got really complicated and I eventually let go of it. Unfortunately that brought an end to our relationship, where I could just casually visit him in Kyoto and have fun exchanging new ideas. I felt like we needed some time before we could go back to the kind of creativity-filled relationship.

It was early last summer that I first heard about him taking some time off to recover from an unfortunate illness. I distinctly remember it, because I was actually sharing a taxi at the time with two super famous people: Yuji Horii-san of Dragon Quest fame and Takafumi Horie, otherwise known as Horiemon.

Iwata-san, when I later saw you appear before the press, I was really happy to see that you had recovered, but it looks like the gods aren’t that lenient… Tezuka-san (from Nintendo) suggested that I make an appointment to see you, but I couldn’t find the nerve to do so. Now, after all my hesitation, I’ve learned that we truly passed each other by, and I’ll never be able to see you again. I wish I had a StreetPass feature that could connect with heaven. I would run out and buy a DS with that feature right now just so I could send you my thanks. Yeah, I know that sounds a bit too convenient for me. When I left the Seaman project, I sent you a book and a letter. Whether you actually read them or not has been on my mind ever since. Also, I’m really sorry for being late with Odama, causing it to completely miss the window for it to be a success. There’s so much more I want to tell you, but I really don’t know what to do with myself after hearing about your sudden departure in the news.

Life is always just a succession of regrets.

Iwata-san, thank you for everything. I don’t typically look up to a lot of people, but I really respected you. I would always be thinking from afar just how amazing of a person you are.
It’s cliché to say this, but please rest in peace.

I’m still here, and although I almost lost hope in regards to being a creator and life in general, I think I want to challenge myself once more.

Iwata-san, thank you for so many things.

How SEGA recorded authentic sounds for their console based 3DS themes

One response to “Seaman creator on Iwata, talks about canceled Seaman 3DS game”