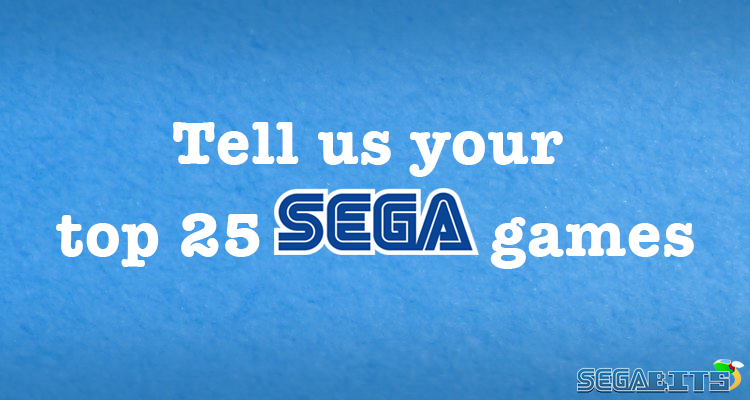 Recently, a major gaming news site that will not be named (on account of their IGNorant actions) made a top 100 list of what they deemed were “The Top 100 Video Games of All Time”. While these sort of lists crop up online often, and they are never in any way definitive, SEGA fans were quick to notice that not a single SEGA title made this list. Seriously? This got us to talking in the SEGAbits Forums about just how many great SEGA games there are, which led to us attempting a list of the Top 50 SEGA Games as decided by the fans. We sorted out a way to formulate a list, but the one thing we desperately need are lists of your top 25 SEGA games! Yes, you!

What are the guidelines?
SEGA is a company with a long history and have produced games for just about every medium. As such, there had to be guidelines for what games are allowed.

Eligible games MUST satisfy at least TWO of the following three qualifiers:
• Published by SEGA
• Developed by SEGA
• IP owned by SEGA

Games must also be released between 1960 and October 19th, 2015. Order your list from 25 to 1 with 1 being what you believe is the best SEGA game. This is YOUR list, so do not feel pressured to appeal to others.

Where do I submit my list?
You can submit your list in the comments section below, or you can join our forums and post to the official topic. The forums have the added benefit of discussion, as only limited discussion will be allowed in the comments as we want to limit comments to lists.

• Atlus games are not eligible.

• Games featuring SEGA cameos (playable or non-playable) that are not developed or published by SEGA are not eligible. So no Project X Zone or Dead or Alive 5.

• In regards to development teams that existed prior to SEGA and were since bought by the company, only the games released after SEGA’s acquisition are eligible. Following SEGA’s acquisition, they are deemed internally developed. Atlus is the exception, as noted above. Example: The first Company of Heroes is not eligible, but the sequel is.

• Games ported or remastered to multiple platforms will all count towards a single game, and you can only have a game on your list once. Do not make a list containing 3D Sonic the Hedgehog 2, Sonic the Hedgehog 2 (Genesis), and Sonic the Hedgehog 2 Stealth/Taxman. Shenmue II (Dreamcast) and Shenmue II (Xbox) are not separate games. Sonic Adventure 2 and Sonic Adventure 2 Battle are not separate. Same goes for recent HD rereleases of Dreamcast and Saturn titles. Makers of lists with multiple versions of games will be told to revise and resubmit. If you only have a game listed once, but denote the version or platform, it’s not a problem.

• Compilations (multiple games on a single disc or cartridge) are allowed. But be aware that listing a compilation gives that compilation a vote, not the individual games. If you really love a few games on Sonic’s Ultimate Genesis Collection, you’d be better off listing those games but you can also list the compilation if you believe it is worthy of a top games list. Some compilations border on what is described as exceptions below, so if you have a question about a specific release please ask.

• 2 in 1 Game Boy Advance cartridges are not allowed.

How are the results tabulated? See the original forum post for details.

Again, if you have a question about a specific release please ask!

56 responses to “Tell us your top 25 SEGA games – submit your list today!”