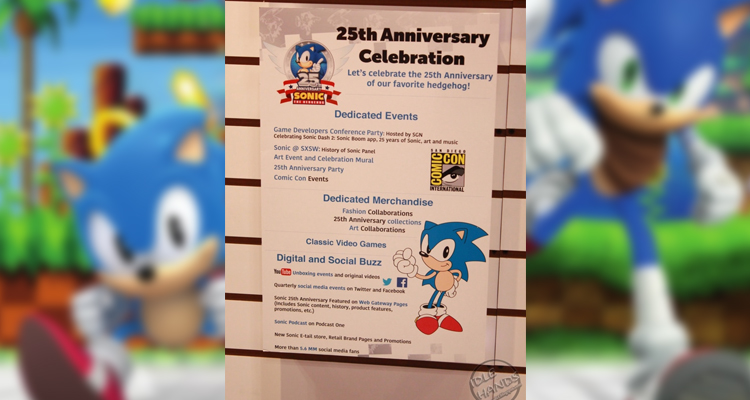 Other planned events include a mysterious 25th Anniversary Party, which very well could be an event akin to Sonic Boom, as well as Comic Con events. Other details on the poster include upcoming products which will include fashion collaborations, 25th anniversary collectibles (no doubt some of which will be by Tomy) and art collaborations. “Classic Video Games” get an odd mention too, with no real indication of what they plan to do with said classic games. Perhaps we will be seeing rereleases, or simply kiosks at upcoming events? In the digital and social realm, YouTube unboxing events and original videos are in the works, quarterly social media events on Facebook and Twitter, a gateway website for Sonic the Hedgehog 25th anniversary content, an official Sonic podcast on Podcast One, and a new online Sonic store.

All-in-all I’d say SEGA has a lot planned for Sonic’s 25th, and it seems things will really start rolling come March. We can’t wait! Well, I can’t wait. I’m not going to speak for you.