IRVINE, Calif. — April 29, 2016 — When Hatsune Miku and her friends take the stage on PlayStation 4 and PlayStation Vita on Aug. 30, SEGA will give fans who pre-order or pick up the day-one launch edition (while supplies last) an extra something special! Because no digital singer’s ensemble is complete without the right accessories, SEGA is giving Hatsune Miku fans a way to keep their real life accessories safe with the Hatsune Miku pouch. Adorned with the symbols that represent the game’s five new auras and made from high quality microfiber, the pouches will be included with each physical copy of the game.

As the best entry to the world of Hatsune Miku: Project DIVA yet, Project DIVA X will be available on Aug. 30, 2016 in both digital and physical formats in the Americas for the PlayStation 4 and PlayStation Vita. The game has been rated T by the ESRB. For more details, please visit the official website at http://miku.sega.com/divax. 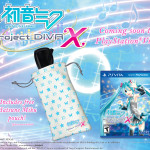 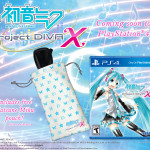