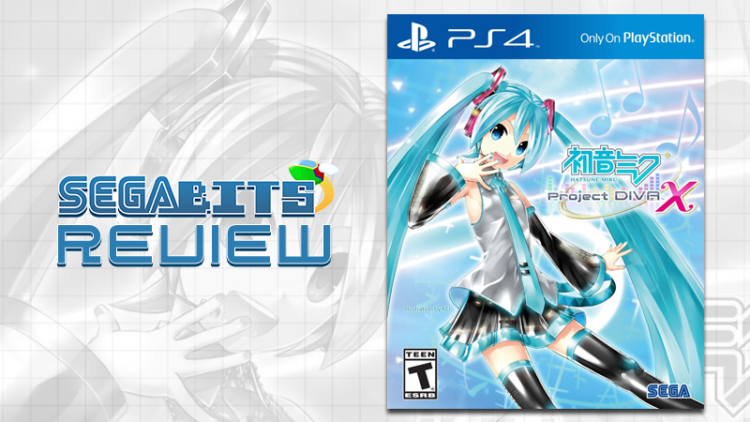 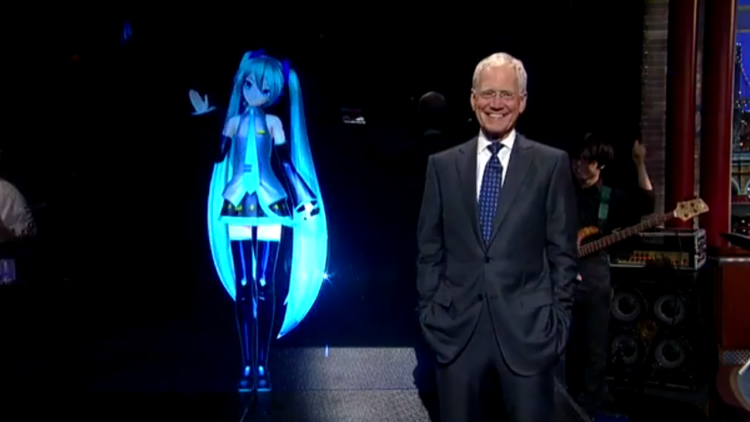 You are probably wondering to yourself what the hell Hatsune Miku is. Is she part of some manga or anime? The answer would be no, she is a humanoid persona from a singing synthesizer software created by Crypton Future Media back in 2007. While Hatsune Miku isn’t the first Vocaloid ever developed, she has turned out to be the most popular. Hatsune Miku was always created to sell Crypton Future Media’s Vocal Synthesizer software but she grew into a strong brand that eventually lead to SEGA picking up the IP.

SEGA published the first title simply called Hatsune Miku: Project DIVA for the PlayStation Portable in Japan, the west wouldn’t get a localization of a title until the PlayStation 3 and PlayStation Vita release of Hatsune Miku: Project DIVA F back in 2012. It seems that the localization of the games have been a success for SEGA since here we are talking about the latest release, Hatsune Miku: Project Diva X, which is called X due to the title being the tenth entry in the Project Diva franchise (its counting everything, including spinoffs). Crypton Future Media has been promoting Hatsune Miku more in the west, back in 2014 she made her American TV debut on the Late Show with David Letterman, had massive sold out concerts and now a SEGAbits review of her tenth game! 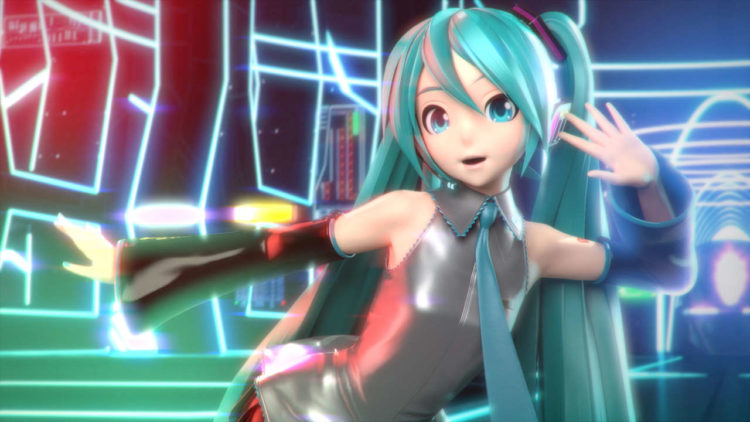 The rhythm game genre is a interesting one because while on the surface they may appear as simple games with not much going on in terms of budget, but the systems put in place actually can make or break a game. This is something that Hatsune Miku: Project Diva X does with spades in my opinion. I have played my fair share of rhythm games including PaRappa the Rapper, Amplitude, Rock Band, Guitar Hero,Rhythm Thief, and Space Channel 5; while all the listed games have some really well thought out systems it felt like they were all easy compared to what Hatsune Miku: Project Diva X brought to the table. 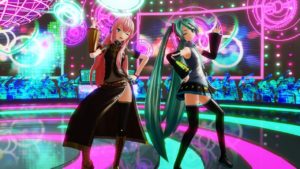 For starters let me just say that the tutorial is rather short and assumes that the players have played past Hatsune Miku titles. When I started I got the hang of pressing the corresponding buttons with the ones shown on screen, I understood that the string of well timed button presses and that nailing the game’s chance time sections are massively important to your overall performances. What actually had me confused was what input to press on star shapes and colored arrows. After doing some googling on the internet I found out that star shapes use the joystick and the colored arrows means you need to use the d-pad and the button its representing (for example right red arrow means you have to press circle). This really adds a new level of complexity to the game that got me frantically angry. Hatsune Miku: Project Diva X is one of those games that looks fun, innocent and cute up front but playing the game just on normal has destroyed my self esteem, while reminding me why I always sucked at rhythm games. Even though sections are ridiculously hard (especially in extreme), the gameplay mostly seems fair that you always want to come back and do better. My main complaint would be the same that I have in most rhythm games (and why I don’t play them that much) being constant eye strain. While the game tends to have a second or two breaks during songs, its not enough for a weak person like myself. To add to all the chaos the game also adds ‘Rush Notes’ to really gain the upper hand with scores, which allows you to rapidly increase your score when ‘Rush’ appears on screen by pressing the buttons shown on screen rapidly.

Unlike most rhythm games, Hatsune Miku gets confusing because its buttons don’t come in a set pattern. For example in Guitar Hero the buttons you would have to press always came in a predictable pattern from the top to the bottom of the screen. In Hatsune Miku the buttons you have to press come from all angles and speeds which makes the game quite the challenge. Though I felt like sometimes the buttons got hard due to being distracted with what was going on in the background which was annoying and sometimes I was just plain distracted by Hatsune Miku’s awesome dance moves. While the game’s graphics aren’t anything to write home about (which rhythm game has high budget graphics?) the game does run at a crisp 1080p resolution and features silky smooth 60fps. 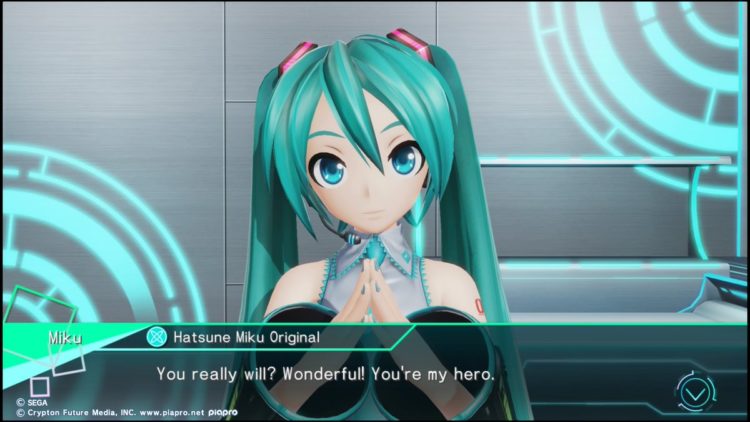 Hatsune Miku: Project Diva X also introduces a new mode called Live Quest which is a story mode in the game, having you team up with Hatsune Miku to play shows in five areas that each have their own elements. The story is bare bones, having you meet other Volcoloids as you progress and other neat surprises but don’t expect a fantastically written story mode. Live Quest will have you perform with Hatsune Miku (later with her friends as well) to try and get enough voltage (aka score) to fill up gems.  Once you complete a number of songs in a area, you will unlock a medley song which is a arrangement of more than one song. This part is no joke, not only will you have to be on rhythm with increasing difficulty, trying to switch up keys, but you will also have to change your rhythm throughout the concert and hope you still get a high enough score to continue through the game. 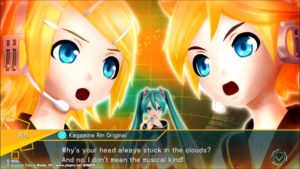 The game also seems to have a RPG like loot system where after you complete a song it gives you some items or ability to unlock a module. First let’s talk about what a module is. It is basically a outfit for Hatsune Miku, modules have been in past games and continue here. Each module has a attribute which means you get bonus percentages if you use said module on a song its compatible with. This makes the user check that each correct module is in place and gives you a greater chance of passing a song with the right module. You even have the ability to unlock some for Hatsune Miku’s friends which adds more to the content you can unlock. While modules are dropped by completing quest conditions and clearing ‘Chance Time’ sections. Accessories are just that, items you add to Hatsune Miku over whatever module she currently has. If you put together matching accessories they give you a small percentage boost in Voltage Rate (giving you a better advantage). There are quite a bit of things to unlock in this game and I felt that this was my favorite part of playing the game. The outfits are rather interesting but it does suck when you get something you had prior. Yep, the game’s drops are random and sometimes it feels like you have to grind to get a certain item. 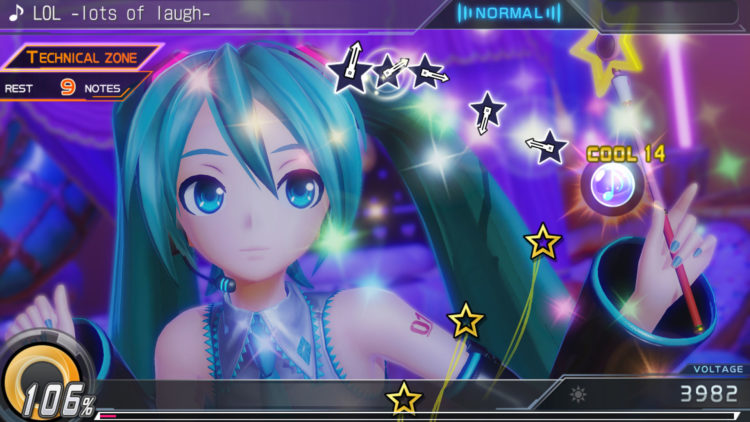 I’ll be honest with everyone reading this review, Vocaloid music just isn’t for me. I get why Hatsune Miku has such a dedicated musical audience and I respect that, it doesn’t fall in my personal taste. Actually, now that I think of it, about 90% plus of rhythm games don’t fall in line with my personal preferences in music. But that is OK because as long as the music is great for its genre and isn’t obviously bad, I can just relax and enjoy the rhythm aspect of the game. I think unlike movies, food and other general video games, nailing down musical tastes is a lot harder. Music has been around since the dawn of time and so there is a broader range than any other media we currently have. Not to mention Vocaloid music is rather niche in the west. 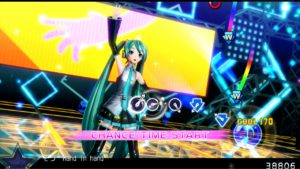 While it might not be my personal taste or something that I would listen to outside of the game, some of the tracks put together on here are damn catchy. Not only that, they change up the tone of songs randomly throughout making them feel fresh and engaging. I found myself humming along some of the tracks due to replaying them so damn much because I refused to be happy with the score I got. I think the reason the game features such different sounding songs is due to its wide range of producers, which included over 35 different producers for the whole game.

Here is the bad part, the game only features 24 playable songs, not counting the medleys that are unlockable. That would means that Hatsune Miku: Project Diva X has the least amount of songs in the franchise’s history (not counting spin-offs). It’s a bit disappointing considering its the next entry in the main series after Hatsune Miku: Project Diva F 2nd which had 40 tracks from day one. You’d think with the game being on PlayStation 4 they would add more tracks, right? Thankfully the game isn’t being priced as a full retail game by SEGA, so this isn’t the worse thing to happen. 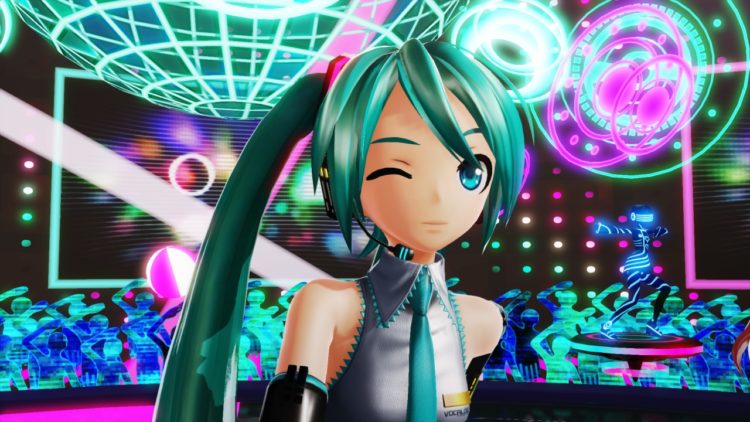 Though if you are getting the game because you heard it had a story mode, you will be sorely disappointed since the game’s story is pretty bare bones and isn’t deep at all. But why would you, you know you came for the game’s music and sadly there lies another issue. The game only has 23 regular songs and is the lowest count for a Hatsune Miku game (not counting spin-offs) which is the biggest negative about the game but at the same time its marked at budget price.

“Hatsune Miku: Project Diva X is one of those games that looks fun, innocent and cute up front but playing the game just at normal has destroyed my self esteem…”