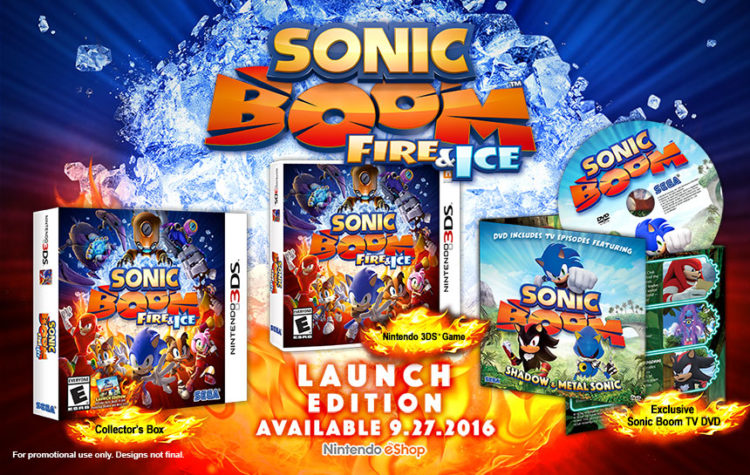 SEGA’s Sonic Boom: Fire & Ice releases today for the Nintendo 3DS in North America, and will release a few days from now on September 30th in Europe. The game is available both digitally on the Nintendo eShop and physically with a special Launch Edition for the Americas which includes a collector’s box and a DVD of select Sonic Boom TV show episodes featuring Metal Sonic and Shadow. While reviews have started to trickle in, expect a SEGAbits review early next week and possibly a SEGA News Bits episode between then and now. I can say that after playing the game for an hour, Sonic Boom: Fire & Ice is an improvement on Sonic Boom: Shattered Crystal. Many issues I had with the original game have been addressed, and aspects that I enjoyed have been given more focus. Even as I write this, I’m itching to go back and play some more, which is a good sign.

After the break, check out the full press release from SEGA!

Burbank, Calif.—September 27, 2016 – SEGA®’s returned to speed with Sonic Boom: Fire & Ice is now available for purchase in North America exclusively on the Nintendo 3DS family of systems for $39.99 in the United States and CDN$49.99 in Canada.  Based off of the cast of characters from the hit animated TV series Sonic Boom, Sonic Boom: Fire & Ice follows Sonic and his friends as they investigate some mysterious and dangerous fissures that are erupting around their home island. The evil Dr. Eggman is back at it again!  Supercharging his latest bot-creations who discovered a new element called Ragnium, he returns to defeat his eternal rival Sonic once and for all along with his latest recruit, D-Fekt. Players will be tasked with mastering the elements of fire and ice, run through lush environments and stopping Dr. Eggman’s latest plan to defeat Sonic for once and for all!

Developed by Sanzaru and published by SEGA, Sonic Boom: Fire & Ice takes Sonic back to his roots, giving players the classic platform gaming experience and feeling of speed. Additionally, it features a seamless character swap between Sonic and friends — Tails, Amy, Knuckles and Sticks. Unlike previous iterations, players can play the adventure platform game straight through, or can take pauses from the adventure to take on the mini-challenges and explore the other aspects of the game like the local multi-player bot races! Exclusive to North America is the launch edition of the game, which includes three episodes of the animated series on DVD for the first time.

“We’ve spent the 25th anniversary year of Sonic developing games that give fans of all ages the best Sonic experience for them,” said Ivo Gerscovich, Chief Brand Officer of Sonic Pillar and SVP of SEGA of America.  “With the release of Sonic Boom: Fire & Ice, we proudly give fans of the Sonic Boom TV series the ability to play along with their favorite characters in a fast paced adventure platformer game.”

Sonic Boom: Fire & Ice is based off the hit animated series, Sonic Boom. Announced for a second season, the cartoon is currently airing in over 100 countries. In the United States, the series is also streaming on Hulu. For more information on where to watch the cartoon, fans should check their local cable provider.