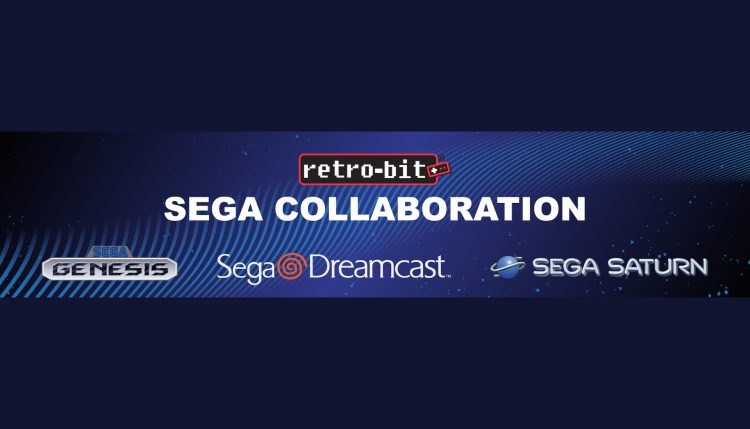 Have you ever played a rerelease of a classic SEGA game and felt that it just didn’t feel quite right with a modern controller? Well we could be seeing classic SEGA controllers for modern hardware soon, as retro gaming hardware manufacturer Retro-bit has announced a collaboration with SEGA. The official press release states that the plan is to produce accessories for SEGA’s platforms which includes, but is not limited to, SEGA Genesis, Saturn and Dreamcast. The first products to be released will include accessories that match the quality of the originals, made for use on original hardware as well as USB for PC use and Bluetooth wireless. These new products will debut in the Innex booth #21023 in the South Hall of the Las Vegas Convention Center during CES 2018.

This is very exciting, as games like Sonic Mania, Jet Set Radio HD and NiGHTS HD all would benefit from the original controllers. Also, the notion of a new Dreamcast pad for original hardware being made in 2018 is just sort of crazy and cool. Also, new USB Saturn pads would be amazing.

Read the full press release after the break

First Products to be Officially Unveiled at CES 2018

POMONA, CA, December 19, 2017– Acknowledging the continual growth of the retro-gaming market, Retro-Bit, a premier publisher and manufacturer of classic gaming products, today announced a licensing agreement with SEGA of America to produce accessories for SEGA’s gaming platforms, including but not limited to the SEGA Genesis, SEGA Saturn and SEGA Dreamcast.

The first products and concepts under the agreement include several accessories that feature the same great quality as their original Sega counterparts like the original console port, but also with modern upgrades such as a USB® port for PC compatibility and Bluetooth® wireless technology. These new products are slated to debut in the Innex booth #21023 in the South Hall of the Las Vegas Convention Center during CES 2018.

“With retro gaming on an upswing, we are pleased to offer officially SEGA licensed accessories in their original format as well as apply the innovative classic gaming enhancements that have become the hallmark of Retro-Bit,” said Titi Ngoy, President and CEO at Innex Inc. the exclusive distributor of Retro-Bit. “We’re excited to unveil the first of these new products and concepts at CES, and do so alongside an exciting 2018 product catalog.”