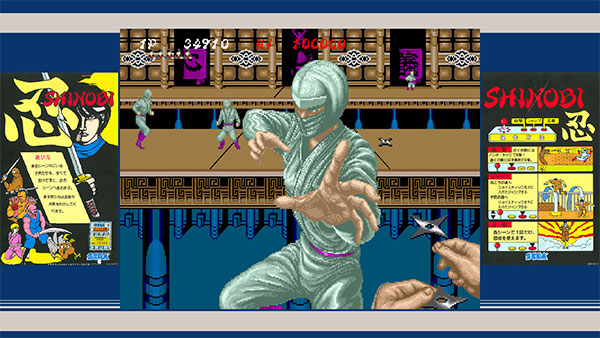 SEGA of Japan recently made an announcement that the classic arcade version of Shinobi will be coming soon to the SEGA AGES line up for the Nintendo Switch in Japan with a release date undecided at the moment.

Debuting on the SEGA System 16 arcade hardware, Shinobi is a side scrolling action and platforming game featuring Joe Musashi as he uses ninja martial arts and weapons to attack enemies of the Zeed Organization while saving the children of the Oboro Clan. In addition, you can use the killing Ninjutsu technique to wipe out the enemies in the screen and encounter bosses appears at the end of each mission with extraordinary battles such as a helicopter carrying a ninja army and a huge computer protected by a Buddha statue.

We will keep you posted on more information for SEGA AGES Shinobi once a release date and price has been announced for both regions.

Arcade 1Up SEGA arcade cabinet in the works, to feature Golden Axe: The Revenge of Death Adder

One response to “SEGA AGES Shinobi coming to Nintendo Switch”