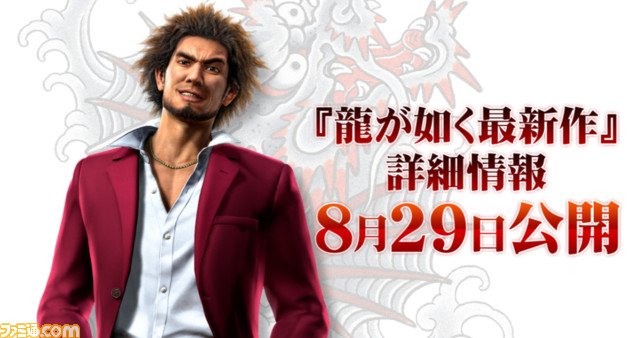 Yakuza fans have been very interested in seeing where the franchise is heading following the release of Yakuza 6 and the studio’s detour with the don’t-call-it-a-spin-off Judgment. Well it looks like the wait is just a little bit longer, as Famitsu has revealed details on the upcoming game will be revealed on August 29th at a press conference. Known as Shin Ryu ga Gotoku or Shin Yakuza (“shin” meaning “new”), the game will be developed by the team behind Yakuza 6 and Yakuza 0 and not the Judgment team and will feature a new protagonist named Ichiban Kasuga.

On our SEGA News Bits videos, we mused that Ichiban appears to be the reverse of Kazuma both in clothing colors and attitude, and he acts a bit like Goro Majima. We’re excited to learn more about the upcoming game, and don’t forget to check back here on August 29th for all the details revealed!