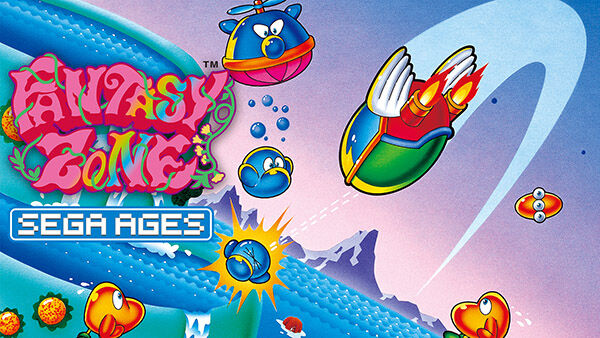 Welcome to the Fantasy Zone, as the classic SEGA arcade game Fantasy Zone is coming soon to the SEGA AGES lineup. In this game you take on the role as the winged ship Opa-Opa, as you are tasked with destroying all of the bases and the boss of each stage, armed with a selection of different guns, bombs, and engines/wings you can purchase within shops. Don’t be fooled by the colorful aesthetics though, Fantasy Zone is famous for being surprisingly hard!

SEGA AGES Fantasy Zone is largely based on the SEGA 3D Classic version, officially referred to as Fantasy Zone Opa-Opa Bros. Like that version of the game, players have the option to stock up on coins they’ve accumulated during play sessions and use them the next time they play, and the return of the Upa-Upa mode. In Upa-Upa mode, players have access to every weapon in the game and can freely switch between them on the fly, the catch being that they consume money as an ammo. In addition, if certain conditions are met, players can encounter the bosses from the Master System version of Fantasy Zone, such as the tooth shooting fish boss from Dolimicca and the turtle-like boss from Mockstar. This rounded off by a new Time Attack mode, where players can try to aim for the fastest time at beating the game.

Currently SEGA AGES Fantasy Zone is “coming soon”, with a price tag of ¥999.